Aggression is probably the biggest emotion because a lot of the stuff I shoot is aggressive music and it comes across in the shots.

[dropcap style=”font-size:100px; color:#992211;”]’T[/dropcap]’here’s nothing worse then shooting some godawful indie band who just stand still making sure their hair doesn’t move out of place’

Rock photographer Mark Latham proves that sometimes, for a tog, there are worse things than a bottle of piss to the back of the head. Kailas Elmer talks to the Jagermeister lensman:

How did you get started in photography?

It was never planned, I kind of fell into it. I went to a local festival and a photographer I knew (Marcella Tighe) brought along her shiny new Nikon D70. Being a bit of a gadget fan I needed an excuse to buy one and as I’m really into my music I thought it would be cool to take photos of bands at gigs. My mates in G.U. Medicine were about to go on a UK tour with American band My Ruin and I asked if I could come along and take photos – and that was how it all started!

What made you want to take photos in the beginning?

I really enjoyed the first few shows I shot, after the first GU show I went to bars in town that had bands on and just practised. These were gigs I’d be going to anyway so taking a camera along was just a natural thing to do. I never planned to make a career out it, just go to shows, drink and shoot. 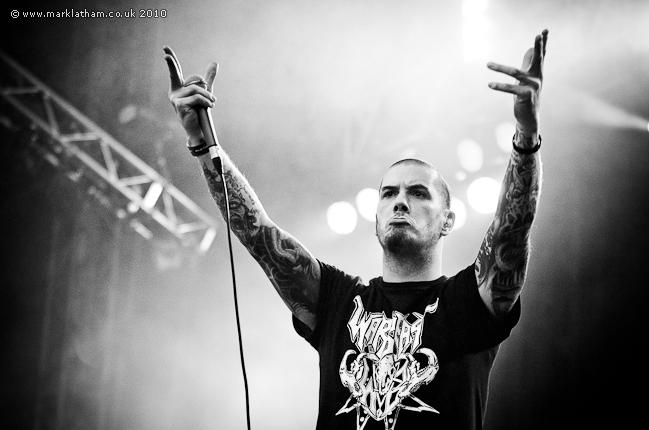 Have you found other reasons to take photos since then?

To be honest I’m not sure if any one influenced me, I didn’t follow any particular photographers. Its not easy to look at a shot and work out how it was taken. I knew that my photos were nowhere near as good as the shots I saw in the mags, so I’d just play with new techniques and get comfortable with the camera.

I did buy a little ebook that Tom Barnes had written, I found that quite useful and I check out his work every now and again.

Pretty much all the shooters I see out on the circuit are ace. I’m mates with them all so I’m always seeing their latest stuff popping up on Faceboook. Sometimes I’ll see a shot and think “now, that’s amazing”. I suppose that’s a bit of an influence – to keep you on your toes!

How would you describe good photography?

In live photography it’s just about catching the moment. It doesn’t really matter if its slightly out of focus or not composed properly. People seem to be obsessed with pin sharp accuracy but I tell people to look at classic shots like when Johnny Cash flipped the bird at the San Quentin State Prison gig – technically it’s a bit crap but it doesn’t matter, it caught the moment, it’s an awesome shot.

What is your approach to music photography?

I don’t have a set pattern, it’s all down to the which venue it is, what access I have and if I’ve been asked to shoot anything specific. I’ve been using the same lenses and camera set up now for about 3 years, so I can pretty much walk into a venue and start shooting within a few seconds. 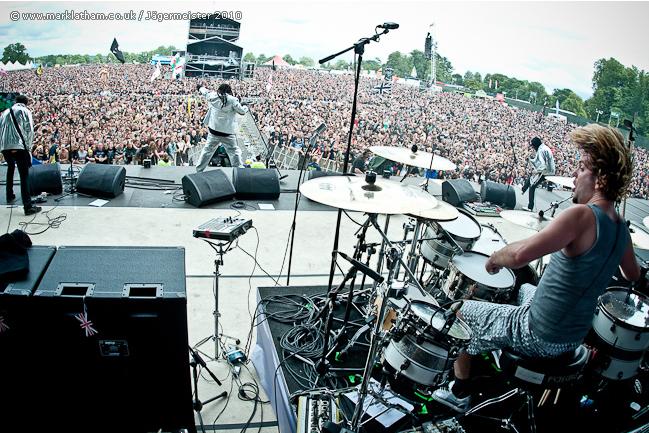 If it’s a new venue I like to have a little wander around to work out the best vantage points, if I have AAA [Access All Areas] then that helps to get better angles. If not, then its usually down the front for a few songs and then I test my luck against security to see where else I can shoot from!

What do you look for in a photographic subject?

There’s nothing worse then shooting some godawful indie band who just stand still making sure their hair doesn’t move out of place. The end result is that the photos look as dull as them. I like bands to run around like idiots, sweating and generally going crazy. It provides endless opportunities to good shots, although sometimes they can be too crazy to get a good shot, so it’s a fine balance.

Generally though, if you’re shooting metal/rock/punk there’s going to be plenty of good shots to get. How do you pick your shots?

I don’t really ‘pick’ shots, I just shoot as much as I can and then pick the best shots when I edit. There can be times when I’ve seen what could be a good shot and moved into place and waited (e.g waiting for a light to move behind someone or waiting for the smoke to drop just right) but you don’t usually have time to do stuff like that.

When I’ve been out on tour with bands, after the first few show you learn how the lights and going to work to so you can be ready for certain shots. Being a fan of the band your shooting can be very handy, if you know the songs and you can work out what people will be doing during the songs. You can kind of prepare for stuff like that. 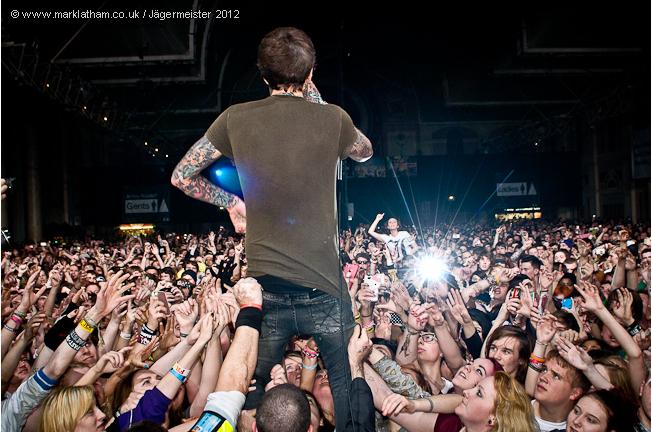 To what extent is emotion a component of your work?

Aggression is probably the biggest emotion because a lot of the stuff I shoot is aggressive music and it comes across in the shots. If you can tell from a photo what kind of music is being played then the photo has done its job!

Your shots from the Jager tour are fantastic – you manage to capture both energy and movement while retaining definition? Tell me about those shots?

I could tell you but then I’d have to kill you…. I know the shots you mean, and its a tricky balance to ‘freeze’ the action and keep some movement in the shot, you have to balance the shutter/ISO and aperture and use flash/stage strobes to pull it off. Shutter has to be open just long enough for movement, but not too long to overblur.

The ISO and aperture all depend on the stage lighting and, for example, when Gojira were playing it was ‘no flash’ but on there second song they had huge strobes firing and I got the shutter down to about a 10th/20th of a second so when I fired it would catch as the strobes went off. You need to shoot in manual (which I always do) and sometimes it just doesn’t work because the conditions are changing too much to get the right balance.

You seem to get away with using flash in your event photography – luck?

Not luck, its a mixture of getting the right access and breaking the rules! The standard rule is ‘first 3 songs, no flash’ which is fine, but sometimes the lights can be so shit and you need to get a shot so you have to use flash. 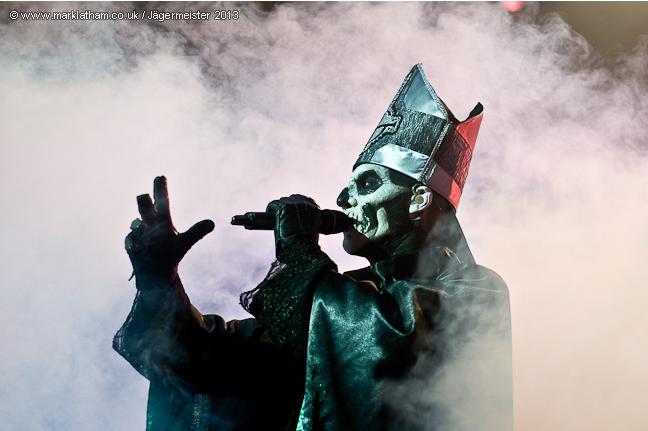 Usually though if I’m working at a gig I just have a chat with band or their tour manager and ask permission, which they’re usually cool about. Some bands just don’t allow it, full stop. Some bands actively want you to use flash. I remember shooting Bring Me The Horizon once and the photopass said ‘First 4 use flash’. Other times when I’m on tour I have a AAA pass, so I can pretty much do what I want, although you still have to be respectful of what the bands want like. On the last tour Gojira and Ghost were specifically ‘no flash’ which is fine because the light show they had was brilliant.

It also helps to have a chat with the lighting guy: “I’m shooting for magazine X so put a good show on, mate” usually works!

What role does instinct play in the choices you make as a photographer? 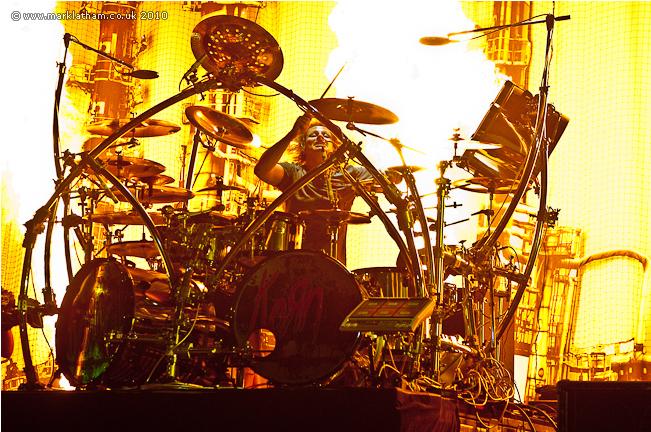 Just getting the knack of being in the right place at the right time and predicting what’s coming next. It goes back to being a fan of the band and knowing what they’re about to do on stage. You instinctively know what’s about to happen and you can move and adjust your camera, ready for it.

Tell me about your rock photography app – how did it come about?

I just decided an app would be pretty cool to have, no one else was doing it! Ive had just short of 10,000 downloads, which is ace. I’m actually working on version 2 of it at the moment, I’m redeveloping my whole web site and the app will also get an update. The original is only on iOS but the new version will be available on Android/Windows phones. Its a nice way of marketing your work with a simple app people can grab for free and see my latest stuff.

Tell me about your association with Jagermeister?

I bumped into Jagermeister’s (ex) photographer at a gig a few years ago, got chatting to him and it just so happened he was off to travel the world – he gave me some contact details and I got in contact with Jager, shot a few gigs and that was that. Ive been their photographer now for about 5 years covering all their gigs/festivals/tours and all sorts of other crazy stuff like the trip to Russia last year with Carlie Simpson, which I photographed and filmed.

Any particular reason you choose Nikon over Canon?

The first DSLR I saw was Nikon, if it had been a Canon I’d be using Canon!

Too many to choose from! Bands do all kinds of crazy stuff! One of my favourites from last year was at HellFest in France, Biohazard invited a mass stage invasion and I got one of my favourite ever shots. Are there ever moments where you’ve been on tour and decided – “no, let this one go undocumented”?

Ha, yeah, lots of occasions but they usually happen after the gig, backstage, or at the after show party when I don’t have my camera with me. My iPhone is full of dubious moments, once the beers flow there’s always some some serious blackmail footage to be captured!