[dropcap style=”font-size:100px; color:#992211;”]M[/dropcap]arillion are a band who have always had an especially strong long-term relationship with their fans, and the way they’ve made full use of this goes a long way towards explaining how they’ve prospered over such a long career.

Weekend-long fan conventions have been a regular feature of the Marillion calendar since the first one at an out-of-season Pontins back in 2002. Such has been the demand that this year they held three separate events, the first in Port Zelande in Holland, the second in Montreal, and the third at The Civic in Wolverhampton.

On each of the three days, the band would play one album in its entirety, with the other half of the show made up from complimentary material. Friday’s album was 1998’s Radiation. It would be fair to say it’s a much-discussed album which has divided fan opinion over the years. It dates from a time when each Marillion album was a reaction against the one before as the band tried to reinvent themselves in a very different musical climate from when they started out.

It was a time when “prog” was at its lowest ebb, and some of Radiation adopted a more contemporary alternative rock sound with as much in common with Radiohead and Suede as with the Marillion of old. Certainly the raw, lo-fi production was a bit of a shock to the system.

Saturday’s album would be Brave, the 1994 concept album inspired by a news story of a girl found wandering on the Severn Bridge. Recorded as a return to their progressive roots after the relative failure of its more commercially-orientated predecessor, the album was always one of the most musically ambitious things they’ve ever done. Dark, intense, and utterly lacking in radio-friendly singles, it’s always been a firm fan favourite. 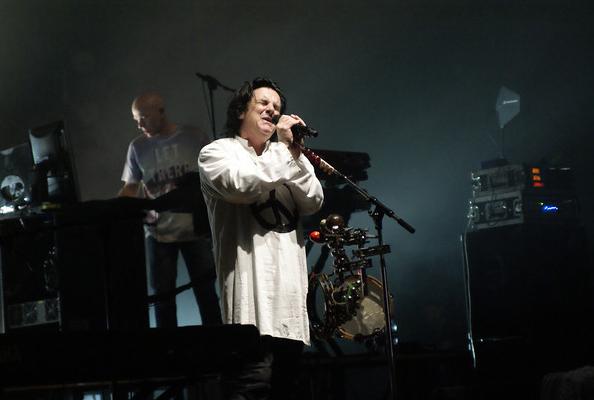 Finally on Sunday, they would play their current album, Sounds That Can’t Be Made released at the tail end of last year, and never before played live in its entirety. On their November tour they only played selected highlights of the album at a time when a lot of fans hadn’t had the opportunity to hear the record.

There was a different support act on each of the three nights. Friday’s was virtuoso guitarist Aziz Ibrahim, accompanied by tabla player Dalbir Singh Rattan, who served as a complete rhythm section on his own; some of the tabla fills came over more as bass riffs than percussion.

They began with a fifteen minute instrumental (very prog) with some amazing fluid guitar work and good use of effects, the two of them making as rich a sound as a whole band. The rest of the set was a little more song-based, and there were moments when it felt as if the singer-songwriter part of his act needed more work, as if things were marking time until he took off on another solo. But by the end of the set it was Aziz’ phenomenal guitar work that remained etched the mind.

There was a huge buzz of anticipation by the time Marillion hit the stage. From the opening hard rocker “Under the Sun” to the beautifully melodic ballad “Three Minute Boy”, whatever Radiation‘s merits on record, the material came over strongly live, and might even have prompted a few doubters to reassess the album. The closing two numbers were especially powerful, with intense takes on “Cathedral Wall”, and “A Few Words From The Dead”, retrospectively made relevant by the terrible events in Boston two days later.

They filled the second half with crowd-pleasers, drawing surprising heavily from pre-1988 material. “Slainte Mhath” has featured in setlists a few times in recent years, and Steve Hogarth’s raising a glass to Fish was a nice touch. But I doubt many expected the band to reach further back, with the hits “Lavender” and “Heart of Lothian”, and jaws dropped even further with “Script for a Jester’s Tear’, the title track of their debut album as the first encore. They signed off with “Happiness is the Road”, the crowd singing the refrain over and over long after the band had left the stage.

The whole thing was recorded as a DVD,

and in a successful attempt to break the record for the time to produce a DVD, the finished product Clocks Already Ticking was on sale the next evening.

On Saturday afternoon tribute band Stillmarillion played a charity gig at Bilston Robin 2. Stillmarillion are a tribute to the 1982-87 era of Marillion, so this one was a trip down memory lane. The obvious highlight was when Marillion’s own Steve Rothery joined them for two numbers, “Chelsea Monday” and “Incubus”, but even without him they pull off the music very effectively.

Then it was back to Wolverhampton for the second night of the convention proper. This time were two supports. First up was an acoustic solo spot from Marillion’s bassist Pete Trewevas, accompanied on some songs by Eric Blackwood of Edison’s Children playing some electric lead lines.

Appearance-wise, if not musically, they gave me flashbacks to The Two Ronnies’ Big Jim Jehosaphat and Fat Belly Jones. Next up were Relish, a trio playing an energetic mix of rock, funk and soul. After a rather weak opening number, they got progressively better as the set went on, with some strong grooves and some impressive lead guitar.

Then came what many fans were eagerly waiting for, Marillion’s performance of Brave in full. They did not disappoint, and proceeded to play one of the most incredible live performances I’ve ever seen them do in 30 years of attending their gigs. Through the emotional maelstroms of “Living with the Big Lie” and “Mad”, the atmospherics of “The Hollow Man” and the title track, and the climax of “The Great Escape” the whole thing built in intensity, and the five minute standing ovation at the end of “The Great Escape”, really said it all.

Many of the songs have featured individually in live sets over the years, but played as a whole it turns into something much greater than the sum of the parts. By the time the applause died down and the band played the coda to the album, “Made Again”, minds had been blown.

Following that wasn’t going to be easy, and for the second set they again they dipped back into the earlier days of the extensive back catalogue. We had fantastic versions of “Out Of This World” and “Seasons End”, encoring with “Warm Wet Circles/This Time of the Night” from “Clutching at Straws”, with that incredible solo from Steve Rothery.

Sunday’s support was Touchstone, a band best described as being at the rock end of prog-rock. Despite a poor sound mix that rather took the edge off things, they played a spirited set which still managed to make a strong impression on the crowd. Kicking off with the epic “Wintercoast” their short but sweet set took in all of their three albums, and it was nice to hear the Discordant Dreams/Beggars Song medley back in the set, something they’ve not played for a while. as ever, makes an engaging frontwoman and visual focus, and the three-part vocal harmonies with Rob Cottingham and Moo Bass were particularly effective when the sound mix did them justice.

Marillion took a slightly different approach for the third night, playing just a single set without an interval. Sounds That Can’t Me Made is more a collection of songs than a concept album like Brave. So beginning with the 17-minute “Gaza”, one of their most overtly political songs, they interspersed the new material with older songs.

Even if it couldn’t quite top Saturday’s incredible performance it was still another great show. The crowd was more enthusiastic than ever, at one point singing the prominent guitar line at the end of the title track as a refrain, much in the same way as we’d sung “Happiness is the Road” on Friday. The band even went into a holding pattern on “This Strange Engine” waiting for the extended applause for Steve Rothery’s final solo to die down before carrying on with the song.

The main set ended with what may have been the best version of the epic “Neverland” I’ve ever heard them play. And for the final encore they took us back down memory lane with “Garden Party”, in which Steve Hogarth paid no heed to Heath and Safety and climbed via the PA stack to the balcony. 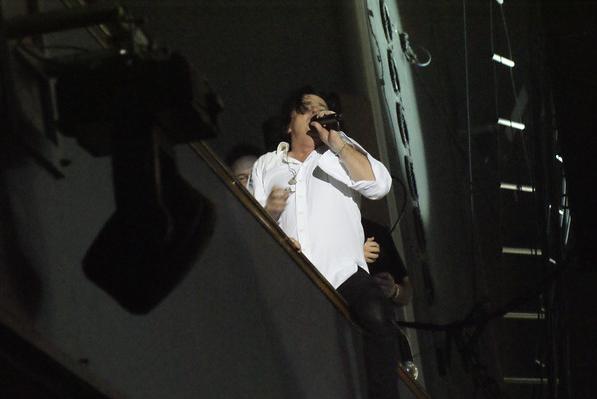 And so ended another Marillion convention. If you only know “Kayleigh” and their other 80s hits, and still ask if Fish is still with them (I got asked that more than once over the course of the weekend!), then you don’t know Marillion at all.

The Marillion of the 21st century is one of British music’s best-kept secrets. They’ve weathered a great many changes in musical trends. They’ve lived through a music business that’s changed out of all recognition and pioneered the art of staying afloat without the aid of a record company.

How many other bands can rehearse and play more than seven hours worth of music over the course of a weekend? What band can omit their biggest hit, yet nobody cares? Who else can continue to make relevant and challenging music more than thirty years into their career? And who else combines that level of emotional intensity with such an incredible level of musicianship?

At it’s best, live music can be as much about the audience as it is about the people on stage, when the band feed off the energy they get from the crowd. So it was here; it went from being able to hear a pin drop in the quiet moments to mid-song standing ovations, and occasions where the crowd became a 2000-strong choir.

Marillion plan return to the UK towards the end of the year. But as good as the tours can be, nothing can quite match the atmosphere of these fan weekends.