[dropcap style=”font-size:100px; color:#992211;”]A[/dropcap]n intriguing display from Chinese artist Liu Xiaodong reinforces why painting still has a place at the forefront of conceptual art.

Liu Xiaodong paints quickly, on site, in seemingly unlikely settings. For this exhibition Half Street at the Lisson Gallery he focussed on three local businesses just off the Edgware Road- two pubs and a Middle Eastern coffee shop.

Filling large 2.2 by 2.2m canvasses with rapid, sketch-like brushstrokes, he merges moments of contemplation within everyday life with slight changes in props, which reflect a deeper immersion and knowledge of the intricacy of human relationships.

‘Half Street reflects both the artist’s interest in the fact that a snap shot of the totality of human experience can be concentrated into ‘half a street’ and also that we can only every really know half the story of people or a place.’

Rejecting more stereotypically ‘British’ venues, Xiaodong elected to focus on the pubs and café due to the diversity of culture and personalities found within a stone’s throw of the gallery doors. The close proximity also allowed him the immersion into the culture that his working method dictates and – on a further conceptual level – highlighted the blurring of boundaries between the everyday and the aesthetic. 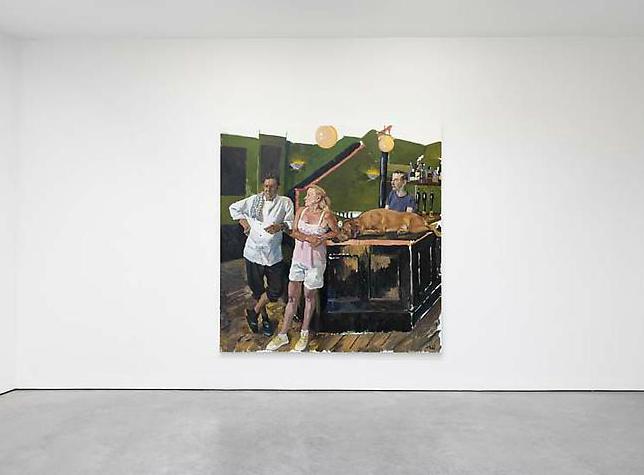 Indeed, learning that it truly was team effort to transport the canvasses from Liu’s makeshift studio at the gallery (he has no fixed studio but builds one wherever he travels) further breaks down the white walls of the gallery space, literally taking it into the street to where the fluidity of the still-smelling oil paint seems aching to flow.

The frantic energy of the bold colouring and rapid brush marks – created through a highly gestural approach that blends Western and Chinese painting traditions – captures the intimacy and drama of realist painting, as well as a personal connection with the hybrid nature of the environment.

The perspective of the paintings slip towards us in a cinematically scopophilic fashion– consuming the viewer within the energy of the process and the concentration of this cultural microcosm.

Microcosm is an apt word, however, since beneath the bravado we begin to notice the distanced looks of the subjects which look beyond the frame. A stage cowboy languidly cuts through the scene, a child’s face contorts and a dog lounges, larger than life, across the bar. Things are not quite as they seem. 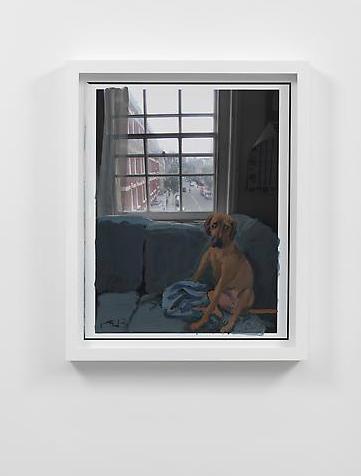 Indeed, they are more so, for the sleights of hand are products of his participatory approach whereby he ‘attempts to confront people and see them as they truly are’ – by collaging in memories of shifts in the occupants of the space, and knowledge acquired in the relationships he forges with them. The different moments that make up a more rounded depiction of a place are acted out across the frieze frames.

To achieve this, Liu therefore not only paints but also drinks in the venues he selects, and ‘warms up’ his subjects for their painted context by getting to know them on a day to day basis. The detached gaze of the documentarist is therefore imbued with a life force of the connection between painter and sitters – as recorded in his diaries (also on show), which reminisce of both evenings ‘spent drinking’ and evenings ‘spent painting’. 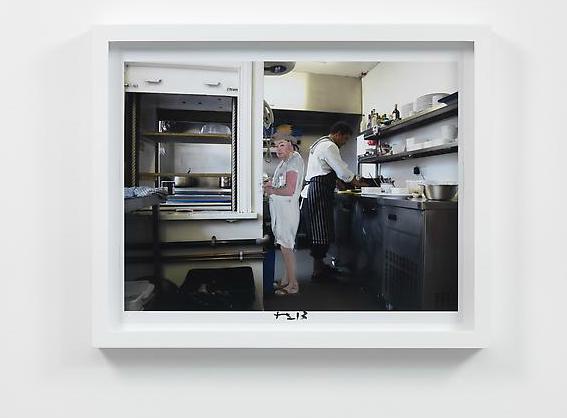 One of the families is visiting the show as I gaze at their painted image. Liu greets them like relatives, kissing the child and presenting them with a print of their portrait. The joy and warmth of the encounter is a sharp juxtaposition with the pensive faces gazing out of the canvass. There is tension beneath the surface; the couple’s mixed cultural origins have made their lives complex, their depicted representation seems to lust after the happy acceptance and integration of the real-time scene on the gallery floor.

There is always another story and, Liu’s brush betrays that– even knowing some of the back narrative is only the beginning. The slipping perspectives and delicately balanced narratives of the paintings are on the brink of transforming – much like the interweaving lives and cultures of their subjects. In a world where we crave for closure, the irresolution of purportedly realist depictions adopts an uncanny aura.

The empty chairs in the ‘portrait’ of the café could be an allegory for the viewer grasping after clues within the compositions, to unlock their implied depths. Despite the declarative quality these are stages upon which multiple layers of reality are enacted through the painting process.

Indeed, it transpires that the café itself is a converted cinema and, the meeting room above attracted Liu due to its ceiling painted with a false sky. It has all the trappings of the intense augmentation of life’s desires acted out in Las Vegas.

In a bizarre twist the attic (used to host card games) also serves as a prayer room. During one of the sittings the Imam became nervous that the film documentary being made of Liu’s painting might confuse the functions. Instead of starting again, Liu wiped out the figures and simply painted the room, which appears to be in a state of anticipation, not quite knowing what purpose it will serve. 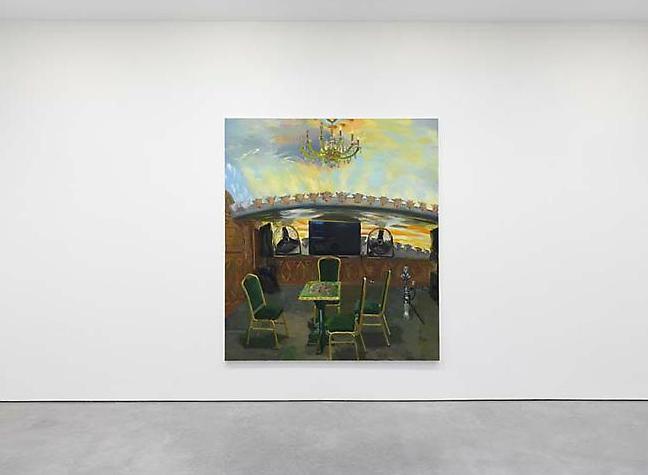 At that time, the television, whose screen stares out with an almost audible blankness in the painting, was broadcasting a lull in the military action in Egypt, as new hope was tentatively embraced with the election of a new general.

Even without this context however, the vacant portrait hangs in a state of transition – mirroring the expressions of the subjects of its neighbouring pictures. Life it seems is caught in a flux of entrances and exits, not so different from Liu’s own background in acting and film direction.[quote]The message is implicit:

paint reveals as much

as the veneer of life

Paint propels the everyday into recognition on a scale even larger than the expansive canvasses – an intervention neatly explored in the photographic works that accompany the three paintings. Small painterly interactions change our perception of the scenes, focussing our attention and highlighting another possible interpretation. The message is implicit: paint reveals as much as the veneer of life conceals, spiralling out narratives rather than closing them down.

In turn, the re-appropriation of his own photographs is an apt reflection of Liu’s conceptual stance as a figurative painter within a contemporary art context dominated by photographic media.

His selection of everyday scenes from life and the energetic quality of his brushwork immediately situate him within an artistic canon of influences ranging from Cezanne to Freud. However, there is a modesty and complexity in the self-aware theatricality of his approach that eschews any defined categories or cultural heritage. It would seem that there is a half street within him too.

Liu Xiaodong is a Chinese painter of modern life who became a leading figure in the Chinese Neo Realist painters to emerge in the 1990s. Past compositions have explored the human dimension to global issues such as population displacement, environmental crisis and political upheaval; always walking the line between artifice and reality.

Liu Xiaodong, Half Street, will be at Lisson Gallery from 27 September – 2 November 2013.

Previous Story:
Do You Have Cyberchondria? Google it.