Lingua – All My Rivals Are Imaginary Ghosts

Mixing the harder edge of Indie guitar with the soaring vocals of mid-era Depeche Mode Swedish rockers Lingua have taken the scrawled melodic postcard of At The Drive-in and kept it in circulation.

Which isn’t to say Lingua don’t have their own sound but that often the precise melodies, tough syncopation and soaring melodies become hidden in overly anodyne production (Particularly Who Doing’s That To You and Centrepiece).  Listening to the first half of All My Rivals… you yearn for Steve Albini to work his stripped down magic on this band, releasing it from sounding more by-the-numbers than it really it is. However the musical Promised Land comes into view after the paced Forment.

The opening riff of In Mere Defense is truly awful and reviewing the first half of the album one gets the feeling that the heavy production is aimed straight at the American College market with the tactical lockstep of verse-chorus-verse  soft-loud-soft radio friendly marketability. However after that turgid beginning suddenly In Mere Defense becomes a different song by a sensational band. Henriksson’s vocals, always proficient, suddenly becomes truly impassioned, his lyrical attack focussed and angry, the guitars, bass and drums finally separate in the mix and ricochet off each other driving each track cathartically onward in a headlong dive off the parapet of modern rock.

The second half of the album conjures up a truly exciting real musical landscape, grittier, with subtle nods to uncompromising acts like Jesus Lizard, Tool and even elements of Meshuggah. Tracks like About Time are really what Lingua are all about, tight and interesting rhythms, compounded by some seriously tasteful bass playing, staccato guitar lines stretching into rock solid chord chorus progressions which in turn allow the singer to alternate between soaring moments of release and angry entreaties spat from bloody lips.

The rise to the top (Disperse) isn’t without occasional valleys; Cobalt Sky will be laughingly remembered as Lingua’s African Child (See Get Him to the Greek) not to mention it somehow conjures Relax by Frankie Goes to Hollywood. Similarly, despite being one of their strongest songs musically, I can’t help feeling that Dejected could have been better served with different lyrics.

It’s selfish of me to wish the next album contains a more complex lead style playing from Misha to augment the rousing choruses. Just as it’s terribly subjective to ask that Juutilainen (Drums) and Carlström (Bass) get more time alone in the spotlight and that compositionally the band gets out of medium tempo rock to truly explore what fast and slow have to offer but this is my review so there you are. I still want more!

Lingua are a very talented band who have some interesting ideas and in tracks like In Mere Defense, To The Borders and About Time (From 1.53 on you’re practically pulling your hair out going “fucking hell why didn’t they make the whole album like this!”), they grab at their potential for expansive, smart, hard hitting rock and weigh in as serious musical contenders ready to take names and kick ass. With some reservations this is a damn good album and well worth listening to, it rocks hard, and Henriksson’s voice will win them many many fans throughout the world, but I see this as a stepping stone to a much greater album from a band that won’t have to dig much deeper to find true greatness. To that extent I won’t mind if they mash the less critical parts of this review into a properly gushing byline, better still I’ll do it myself: Soaring moments of release and angry entreaties spat from bloody lips, Lingua are serious musical contenders ready to take names and kick ass! 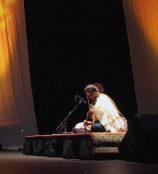