A new and vibrant voice in contemporary painting, Joseph Chidlaw talks to Trebuchet about his art and influences

[dropcap style=”font-size:100px; color:#992211;”]W[/dropcap]hilst the interactive, behaviour-reaction algorithmic full-body projections of Singaporean Art-Science visual installations (and their like) offer new perspectives on the role of artist, viewer and their respective responsibilities of agency in exhilirating and whizzbang ways….

There is still much, much to be said for the pure art of painting. Of brushstrokes and the audacious vision of individuals who impose artistic meaning onto canvas (and viewer).

Joseph Chidlaw is an artist of the latter stripe, and a single glance at his bold work is enough to convince that painting still has a long life ahead of it.

His degree show takes place at Central Saint Martin’, London from 24th-27th May. Trebuchet put some questions to him for a little context to accompany the visuals.

What got you started with visual arts?

From a young age, I knew that I loved drawing and then when I first painted at 12 I knew it was my calling. I remember at age six I won a Pudsey the Bear competition in school for colouring Pudsey in; I refused to go out of the lines!

In the beginning, I was influenced by Picasso and Dali. I became engrossed in their revelry and different approaches to painting. The surrealist style of Dali echoed something similar in my own at that early stage. An array of different artists. Sometimes you can spend far too long trying to emulate other artists which I think every painter does in their early stages. The main challenge was finding who I was as a painter. But if I had to put out contemporary and non-contemporary name it would be, Peter Doig and Manet.

I do. I try to live both as the artist and as the viewer so that I don’t become too narrowed by my artistic vision. I’m often turning paintings around to the wall and giving them a week to rest, and then re-evaluating.

How do your political beliefs come into your paintings?

My political perspective is something that I’ve never overtly expressed in my practice, until now. With what is happening in Chechnya, the Middle-East and other countries, I feel I have to express my fears and show the atrocities which are happening to my community (the gay community). 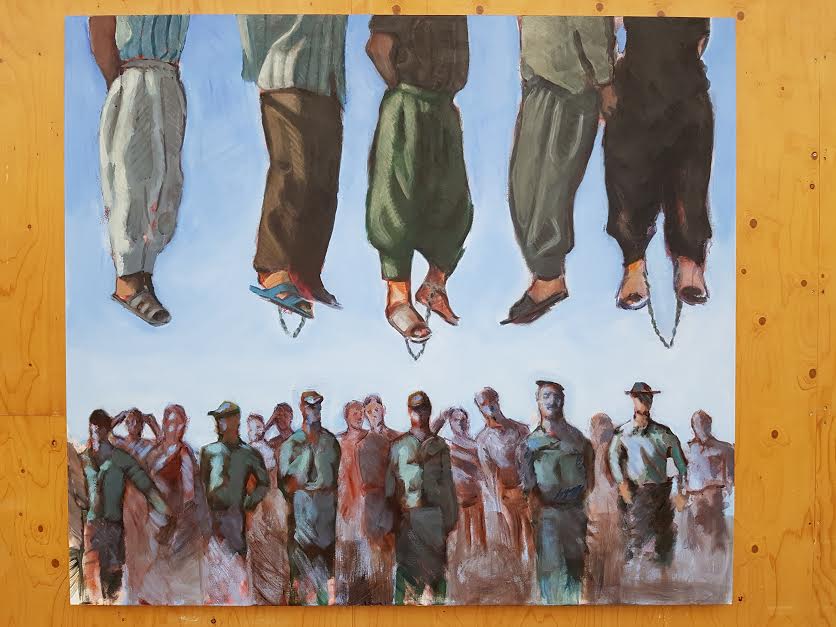 What excites you about art?

When art aggressively and unapologetically speaks about a topic that no one dares. When it says, this is what is happening in the world right now. Manet’s Déjeuner sur l’Herbe was a piece that did this for me.

Your degree show at Central Saint Martin’s is on from the 24th-27th May. What do you hope viewers will take from the experience?

I just hope that visitors can see my perspective and it can bring more light to the situation. I’d hope that it would generate conversation however negative I anticipate this could be. The imagery that I took for my degree show paintings are from social media ‘memes’. It was this sardonic tone that I wanted to flip and re-evaluate.

The humans in your works seem more the subject of reportage than portraiture – why is that?

For me there is not so much that you can do with portraiture when it is going in front of the public. The portrait is quite a domestic staged version of the human form. To report and display life with spontaneous figures creates a gravitas of culture which brings an array of different people to interpret and question.

You’ve obviously been concentrating on your degree show for the last while. What’s next?

I’m at a crossroads at the moment. I am either going to do an MA in fine art, or take a year out and work on my practice.

Looking at your earlier works from 2012 – 2013, there’s a very definite development in that your current works are less visually busy, more focused on a single moment, expression or emotion. Talk us through that transition.

I try and consider the viewer and their interpretation. By overloading a painting with metaphor and imagery you can some time lose the main idea of the work. I’ve recently tried stripping my work back to localise on a specific train of thought rather than a semantic field of emotions.

Kenneth Clark quotes Ruskin in Civilization: “Great nations write their autobiographies in three manuscripts: the book of their deeds, the book of their words and the book of their art. Not one of these books can be understood unless we read the two others, but of the three, the only trustworthy one is the last”. What would your art convey to a historian discovering it in in a thousand years time?

I think my work would show the period of time in which photography and painting have become symbiotic. A reaction to the ever reducing conceptual and a re-birth of realism in painting.

Previous Story:
Take Two of These and Cold Turkey in the Morning: America’s Opiate Crisis

Next Story:
Making People Feel Bad… can be GOOD for them?