We’re recording. Carefree and silly, it’s going be hard to get a serious question past them. LTNT Camden Rocks interview 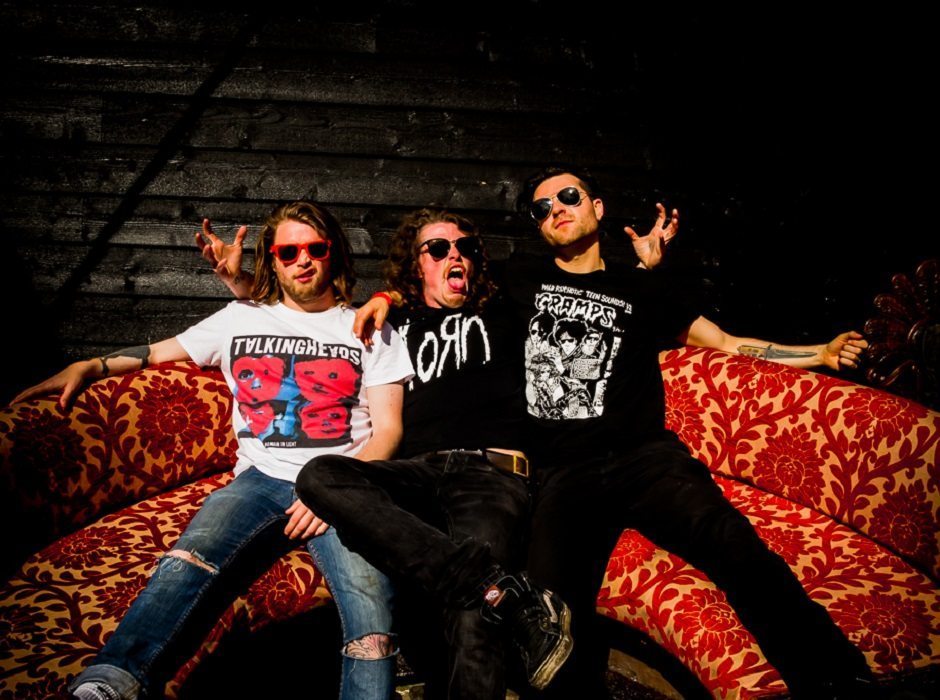 [dropcap style=”font-size:100px; color:#992211;”]S[/dropcap]urrounded by the treasures of antiquity, faked in a Camden restaurant, time stands at attention as phalanxes of journalists mill about what has become the Camden Rocks press area.

Gossamer threads and groupies spin around the stinking violets of LTNT (Lieutenant).

A shambolic troupe of youth and vigour, clambering into a interview booth, a heaving mess of tattoos, hair, and beer. Mothers be shocked, fathers disrespected, here are the phantom youth, the lost and changeless, less rebellion and defying expectation… more extension and appropriation. It’s easy to academise the current neo-grunge movement is flannel a reaction against soulless EDM? Or is this a primitivistic reimagining of grunge’s pre-drug ascent, a reaffirmation of punk, or even an echo of the classicist’s cry that musicians should be ‘make some good music (yer know, summink I ken hummmm)‘.

The red light goes on. We’re recording. Carefree and silly, it’s going be hard to get a serious question past them. But ready or not, we square off. It’s question time.

Trebuchet: Last time we met you were at the Dean Street Studios. Presumably things were going well?

Liam: It was nice to get you guys down and have you hear the album. We just played it and sounded right and we played the Moog which was cool.

Trebuchet: Did you get to play the Mellotron in the end?

Liam: I wanted to get it, but we didn’t in the end. Which is sad because they’re so hard to come by. 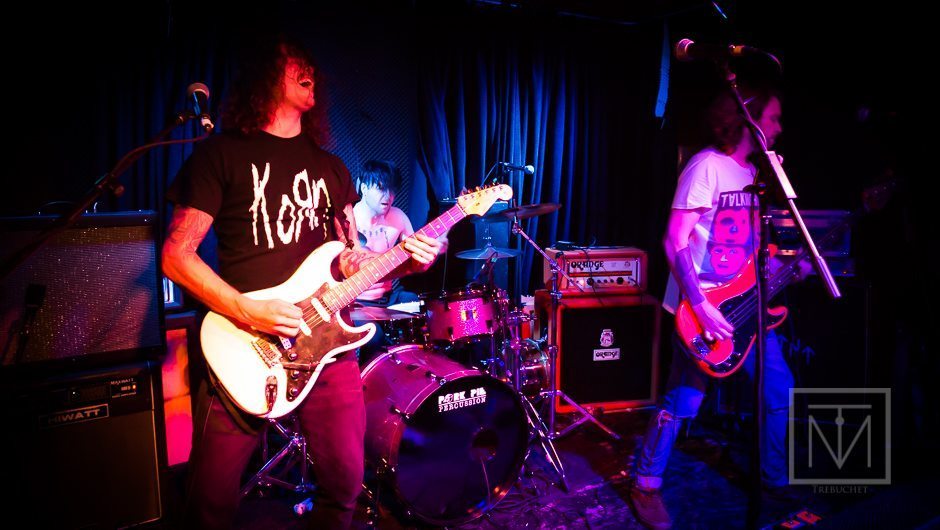 How many songs did you record during that session?

Neil: Just one, we kicked two songs off the record that we weren’t happy with in the end. So we just had a whole day to record a song and that doesn’t happen all the time for us.

Trebuchet: Do your songs come together pretty quickly?

Liam: Yeah, we write everything live. We literally make horrible shit noise for hours and then in the end if we get something, we distil that into the songs.

We’ve got rehearsal space in Manor House and we’re moving to Brighton as soon as we finish this record.

Trebuchet: Aren’t you guys living in a… erm, transitory experience at the moment?

Yes, we live in a van for the foreseeable future.

Trebuchet: Is it a good story or is it something you’re a bit sick of now?

Neil: It’s massively liberating as a creative person. I don’t want to sound hippy, but it opens up so many more possibilities.

Trebuchet : Album coming out in August, tour in Europe and then the US, and within that time, doing some festivals.

Neil: We did The Great Escape, we’ve got another one coming up, but we’re looking forward to all of it. 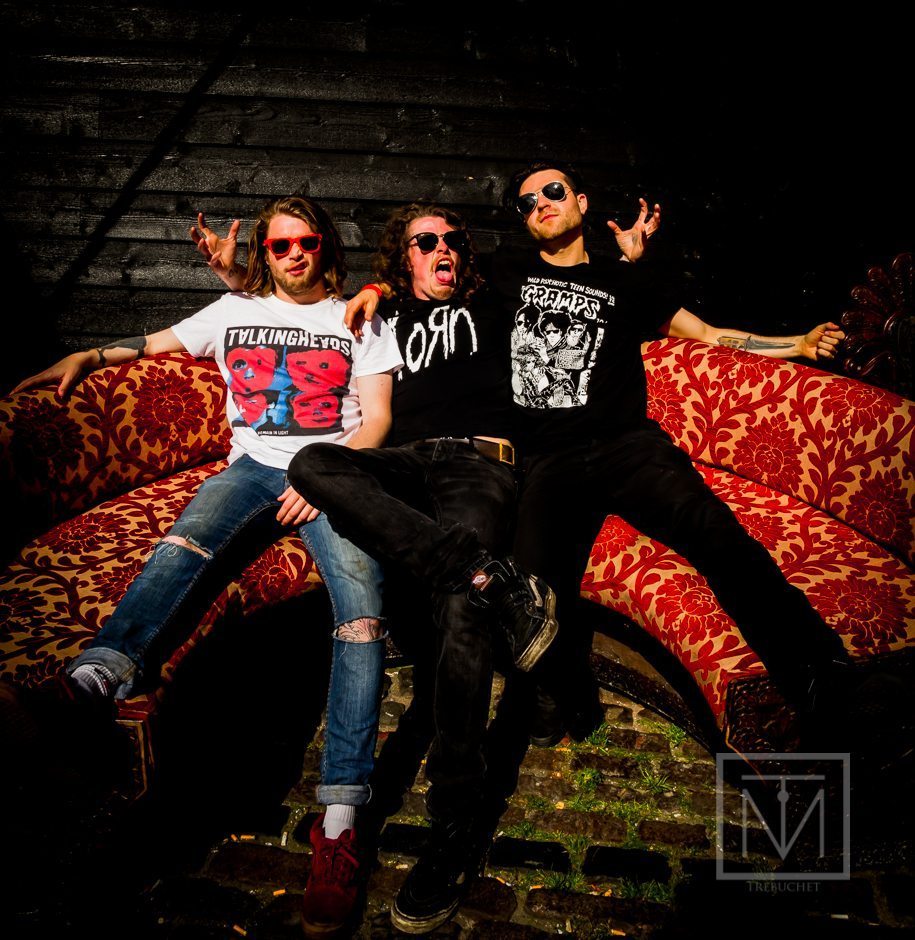 Liam: When we were 13, I met Ben and we were playing in bands around High Wickham and Watford. There was a little scene there that included bands like Incoherence, Sikth, JettBlack, etc. Mikey’s playing after us with his new band Outside of the Coma, who are amazing and people should definitely check out his new video (Outside the Coma Supported Dir En Grey in the London on the May 24th, a few days earlier).

We drift off, talking about the inconsistencies of Kevin Costner’s Robin Hood, walking from Dover to Nottingham in an afternoon, and the about the importance of a power ballad.

Trebuchet: Do you have your own power ballad?

Neil: We do actually. I reckon we got two ballads on the new album and we’ve got them back to back.

Liam: Because we’re not really one of those bands that has an album that sounds like they recorded a song, did ten different mixes of it and that’s the album. I like Clutch, but everything kinda sounds the same.

We had to group them in so that it didn’t get too schizophrenic, so we have a down part of the record which is towards the end.

Trebuchet: So what’s the flow of the record: start mid then go high then low…?

Liam: Balls, balls, more balls, then some tits, leading to an end which is just arsehole, followed by just a twinge of cock.

Trebuchet: That’s the formula right there. Where have you recorded your EPs and things?

Neil: Rockfield. The vibe there is incredible. A lot of people say they don’t really care for the atmosphere or history of a place, or that it doesn’t make that much difference. But knowing that Tony Iommi has played there puts you in a good mood and that makes you play better. Rockfield has so much of that.

Trebuchet: You’ve been called post-grunge, which you would think would mean an effectless setup generally, but you’ve got loads of effects on all your instruments. Can you tell us more about that?

Liam: This is the thing. I use three amps now, which is a fucking pain in the arse but I have to do it. I use a bass amp, a solid state with a Marshall cab and then I use a nice Fender Deville for some tone. But then I use this one thing that everyone is just discovering and it’s not even that weird, but now everyone is going ‘Oh you use it that way, do you?’. So I am desperate for Roger Mayer to build me something. I have been trying to get Shaun to hook me up with Roger Mayer to build me something that I can put a sticker on. Be like ‘Fuck everyone, no one is getting this!’

Trebuchet: So people are stealing your sound?

Liam: (Laughs) I don’t know. But I’ve seen people posting on Facebook ‘Oh I just got this’ and I’m like ‘Noooooo!’

Trebuchet: You’ve got a Les Paul sound but you play teles and strats?

Liam: I run a low octave all the time. I run it through the whole set. I also run a square wave so it’s basically like a synth.

Liam: Oh fuck them! I fucking hate that band. That fucking band should be called Kaos Pad. They suck. I mean they’re a really good band, they’re really good players and they write good tunes. But there is nothing about them.

Liam: I think they’re just a bit muso. I mean with Yes you could tell that they would have a spliff every now and again. It sounds like Muse are like ‘I’m just going to take an aspirin and see what comes out’. Nothing against the guys, they’re obviously going to be dudes because they’re in a big band and whatever, but I just hate their music.

Ben: I know the interview is going well when the manager starts putting her face in her hands.

Trebuchet: You haven’t even said ‘penis’ once in this interview [LTNT sometimes run a competition to see how many times they can say ‘penis’ in an interview].

Ben: We have now.

Trebuchet: You’re mixing the album at the moment, what are you looking at in the final record?

Ben: We tried to keep emotions to the minimum so it’s all basically fader up on a lot of things. Because we record everything live it’s easy to do that. So now it’s just about sitting with the mixes and seeing what’s wrong, maybe the vocals are a little quiet here or there, and tweaking them.

Liam: We want the record to be this raw thing. We’ve got Howie Weinberg mastering it.

Liam: He did the single, there’s so much air around it, you’re sitting in the record as opposed to it being flat in your face.

Neil: It’s so hard so get it right. Howie seems to be able to get more out of less sound, if that makes any sense. He gets his priorities straight. I don’t know enough to describe what he does. But when you hear it you know it.

Ben: He mastered nearly every one of my favourite records over the years.

Neil: He comes so close to making the record sound exactly as you’d want it to sound. I don’t think there is anyone else who’d come as close as to getting it that exact. I’m very excited about how it’s going to turn out.

Liam: And I owe him a Pina Colada. I said I would get him one. So I will. I don’t know how, but it’s done. Plus I like Pina Coladas.

Trebuchet: Getting caught in the rain? It’s quite a dark song really. Strangers placing infidelity ads.

Liam: But all the best stuff is dark. I think we’re all dark, aren’t we? And a bit weirdo, but no one really admits it, do they? Apart from Neil and me. (laughter)

Neil: I don’t know what you’re talking about. I’m all fucking sunshine.

Liam: Ben’s actually a genuinely a good person. I don’t know what he’s doing in this band.

Neil: He’s only in the band coz we’re bad people and we’ve ruined his life (laughs)

Liam: He actually likes himself. How’s that working out?

Ben: You should try it sometime. It’s quite nice. (more laughter)

LTNT are currently on tour in Europe with a US tour to follow.

Previous Story:
Anxiety of Indolence : Is Your Armchair Killing You?

Next Story:
Babyfaced Killer or Killerfaced Baby. Can You Tell?