I was always closer to rock´n roll (Nils Frahm) 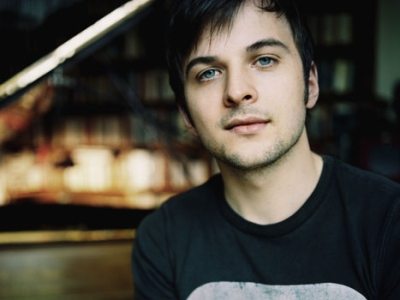 Wadding the strings of a piano with folded felt and mounting microphones so deep in the instrument that you can hear the creak of hammers and keys. Nils Frahm is not scared of exposing his technique.

That technique, happened upon in a happy accident involving late night piano sessions and sleeping neighbours, is the most striking element of Frahm’s album Felt. Hearing every movement of the piano, every breath taken by the musician, and the alaming tempo of thuds and impacts within the music, projects a level of intimacy onto the listener that is unparalleled. The listener is already connected, through these layers of audible movement, effort, composure. What’s missing is the backstory. Nils Frahm tells it:

Trebuchet Magazine You’ll probably need to have been dead for at least a century before the classical establishment will even consider accepting your music. It’s always been the case with art – literary, visual or musical, that artists move more quickly than the establishment which gathers around them. Nevertheless, there are a growing number of musicians – you, Peter Broderick, Kid Koala to mention three, who are creating music which is ‘classical’ in technique and ambition. What pushes you to make this music which isn’t commercial/mainstream, but which isn’t accepted by the classical purists either? Is it frustrating? Nils Frahm Oh gosh, no! No, making music you really want to do is never frustrating. It was frustrating a couple of years ago, when I was doing this kind of music and nobody listened to it. I am actually really impressed that so many people seem to care about this young genre of music.

I never wanted to be part of the classical world anyway. I wanted to play my own music and I was always closer to rock´n roll than to academic music. So I am happy about the kind of audience I am getting and the scene I am in. It is a wonderful niche.

Trebuchet Magazine I mentioned Peter Broderick and Kid Koala because in both cases, there is a strong visual aspect to their most recent work. Broderick’s album is conceived as the score for a documentary series, about an intensely emotional subject. Kid Koala, whose album is predominantly piano, also conceptualises a visual aspect to the piece. In his case, the album is the soundtrack to a graphic novel.

‘Felt’ though, is not associated with any visuals, at least none imposed by you as composer. There is a simple video for ‘Unter’ on YouTube, but even that is a single shot of some grass blowing, without a narrative. Should musicians just stick to music?

Nils Frahm I totally understand the fascination of merging artforms and taking them into some form of dialoge, and I would never say that musicians should stick to music. But I personally think it is wonderful to create music which just delivers the images into your head, so that you don’t need a movie to accompany it. That, for me, is a high form of expression. To just leave so much air in your music, but also condense it as much as possible to give people a whole new world of imagination.

Music can express feelings  which would be hidden always and forever without it. So currently I am working more on making music just for the sake of making music.

Trebuchet Magazine It’s probably fair to say that every listener to ‘Felt’ will come up with their own mental imagery to fit the music. When I reviewed the album for Trebuchet I mentioned something about abysinthe and laudanum, because to me the music brings a picture of some poverty-stricken 1920s musician in Paris, buzzing with a crazed sense of inspiration and playing non-stop for three days running. I don’t suppose it was really like that, but how much of your composition is a case of sudden inspiration that comes as you play, or how much is it something you work over in your mind beforehand?

I believe in hard work. I think that the muse only comes when you keep doing it

Nils Frahm Making music stimulates your brain in a very interesting way. Sometimes it just clicks and you know that you’ve got something great, sometimes it is just ok, but nothing special. I don’t know how I can provoke a great compositional moment. It just needs to happen. There is this muse out there and sometimes you have to wait until it comes around to kiss you again. But in the meantime I believe in hard work. I think that the muse only comes when you keep doing it, you have to stay in there and exercise. But when I listen to my music I never have any pictures in my head. My eyes inspire pictures in my head and music inspires…well…music in imagination. Something wonderful and impossible to describe.

Trebuchet Magazine Do you sit down to the piano with emotional themes in mind that you want to explore, or is it more technical – like you want to improvise around a series of modal chords, or a particular scale, for example?

Music is physics and composition is math

Nils Frahm It can be all of those. Sometimes you just want to encounter some sadness or happiness, or excitement or frustration, but then you can also get sucked in to a more mathematical approach. Music is physics and composition is math. Also, there can be a technical challenge you want to overcome by composing a difficult part. But the most exciting thing about playing is playing into nowhere. Improvising brings you to a meditative state of mind. It is the only place where I feel truly fulfilled and doing so live in front of people can be hell and heaven at the same time. It is so terrifying but also so wonderful in the same way. It truly is what I always wanted to do. I was never really interested in just playing a composed piece again and again until it lost its soul.

Trebuchet Magazine On some of the slower pieces, ‘Less’ especially so, your sense of time is noteworthy. More importantly, your sense of restraint. There are times when it is almost as if you are not playing the piano as much as you are playing silence. How long has it taken you to get to a point where the silence is not intimidating?

Nils Frahm I think my audience taught me that it is not about my technical skills. It is about a certain touch on the instrument. Realizing that it is not about speed or difficulty level made me explore restraint and compositional humility. I didn’t want to have the very epic show off moments on Felt. The overall feeling of it was focus and it didn’t need speed, it needed space. Lots of space. The piece you are talking about is an improvisation and one of the moments where a muse kissed me and I was able to really listen in the moment.

Trebuchet Magazine You damped the piano-strings with felt so as not to disturb your neighbours as you played. In that respect, your schedule has a physical influence on the recording. But it’s not only that physical influence – the whole feel of the album is of the ‘night’. What’s the allure of playing in, composing in, the dead of night?

In the night we enter the emptiness

Nils Frahm I need the silence of the night to make music. Only when all the sounds disappear can I really start to listen to myself. To some quiet melody somewhere inside myself that is there in the daytime too, but the daytime is so dry, it seems. People call you on the phone, everything is real and has no second meaning. In the night we enter the emptiness, and knowing that nothing will change my day anymore gives me a calm relaxed feel that I always like to extend. So I usually never sleep until four in the morning.

Alternatively: the paranoia of being alive fades out at nighttime.

Trebuchet Magazine There seems, from the point of view of the listener, to be an incredible freedom at Erased Tapes. You, Peter Broderick, A Winged Victory for the Sullen, Olafur Arnalds, Rival Consoles – you’re all making music which seems to have no limitations imposed on it by the label.

There doesn’t seem to be any a&r guy in the studio telling you to record a pop single, or to compromise in some other way. I don’t know how accurate I am in thinking like this, but it almost seems more of a contemporary conservatory of music than a traditional indie label. You seem to appear on each other’s projects quite often. Do you all know each other and work together?

Nils Frahm There is a great sense of freedom on this label for sure. Robert [Raths, label founder] has opinions on the albums regarding track order and artworks and such, but the motivation to work on a record is always up to you. I never feel any pressure that I have to finish an album because we have a contract. Erased Tapes is a wonderful place for creating music and I couldn’t be happier in this family. And it is a family.

The modern classical world is small and we all know each other from touring and making music together. There is a warm vibe in this circle of musicians and we like to help each other out wherever we can. And it makes me proud to read great reviews of my friends new records. So there is no competition thing going on.

Trebuchet Magazine Is it possible to reproduce the album live with the same sense of intimacy, or do you adapt it to fit the different circumstances of a live performance? I can’t imagine how it would sound in a large space, or at a festival, for instance.

Nils Frahm I wouldnt think so, and I also don’t think it is needed. Some music works great for a record, but wouldnt make sense in a big concert hall. Also, I like to play a different set every night so I have no need to “tour my new record” kind of thing. I have new ideas for the upcoming tour but I would hope that people just come to the show with no expectations and be ready to be taken on a journey.

Trebuchet Magazine So what’s next? Will you be touring? Recording? Composing?

Previous Story:
Invisibility Paint. Just be sure to remember where you left it.
Next Story:
The Prodigy, Metallica and Black Sabbath to headline Download 2012