All of our blood was confiscated at customs: Ice Nine Kills (Interview)

[dropcap style=”font-size:100px; color:#992211;”]I[/dropcap]t’s a rainy night in Manchester (!), so naturally our man in the murk Jed Saint found a way to sneak into Satan’s Hollow for a chat with Ice Nine Kills frontman Spencer Charnas before their debut UK show….

First date of the UK tour leg – where are you looking forward to most?

I’m really looking forward to London, I’ve visited once before last summer and it just seems like such a cool town for music! Also, it’s great to come to Manchester as our first date – I’ve heard so much about this town too.

Right on! We think we’ve got a decent scene here.

Best way to pass the time on the road? You’ve got lots of distance ahead.

We tend to watch movies. We’re big horror movie fans so we usually have either Friday The 13th or the Hallowe’en franchise rotating to keep it violent! 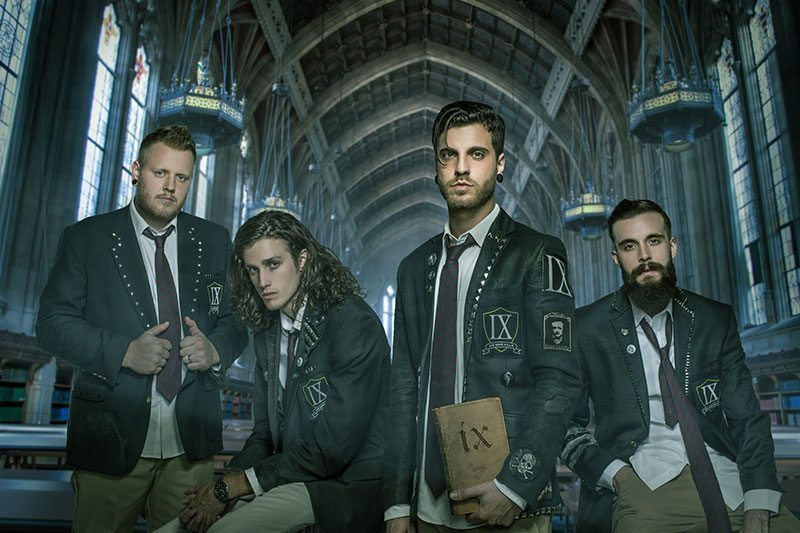 Are you actually staying in hostels on the hostel takeöver tour?

We are. We’re booked in one in Arnhem in the Netherlands and we’ll see if we make it to the next venue! We might get killed (laughs).

Well tonight’s the first night so hope so! This club in particular, Satan’s Hollow, turns into a nightclub afterwards so hopefully we’ll get a party in.

A LOT of breakfast. And a lot of horror movies. That’s pretty much a cure for everything. It might make you vomit so, you know, that’s a good thing when you’re hungover to get it all out from the night before.

You guys always put a lot of effort into your videos – any cool/funny stories from shooting them?

We did a video for Communion of the Cursed which is based on The Exorcist starring Reagan, this little girl who gets possessed by the devil. We really had an 11-year-old girl play the part of Reagan, so when we got to the video shoot I saw this young, little innocent girl with her parents walking towards the shoot. They introduced themselves and I said are you sure it’s okay if she does this? There’s some profanity and there’s head spinning and it’s really scary. The mother said to me “it’s ok, she’s been killed on camera so many times that it’s no problem for her – she’s in dozens of horror movies”. Just to see parents so cool with their daughter doing something so horrific was really funny to me!

How many gallons of blood have you brought for us this time?

Unfortunately all of our blood was confiscated at customs. We tried to tell them that it wasn’t real blood, but they figured out that it really was so, y’know….

That’s rude! Any special treats for this tour?

We’re playing a couple of songs from our older records that we don’t usually play, a few fan favourites that kids want us to play – especially those who’ve never seen us before – so that’s new and exciting for our set.

What’s your take on the UK scene at the moment? Are there any up and coming bands you’d like to give a shout out to?

I rarely come across bands these days that I like. I either don’t have enough time to just relax and seek them out or I don’t really like a lot of what’s coming out, but I’ve recently got into this band Creeper which I’m sure everyone in the UK loves. They’re awesome and it reminds me of the stuff that I used to listen to when I was in high school and I just think they’re great. They have great lyrics and I like the whole atmosphere, they’re just a great new band and I think they’ll explode eventually in the US as well.

How does our scene compare to the US, from your point of view?

I really don’t know! You know, I know that there are good bands from the UK but I’ve never really experienced a show here. I’ve never really been to a concert here and I’ve never played one. I’m thinking from what I’ve seen people are really into music, I’ve just met some of our fans at our meet and greet, everyone seems really excited and passionate about keeping the scene alive. So far it’s great, you’ll have to ask me that question again after we’ve played a few shows.

I don’t really listen to too much new stuff but… let’s see… I did like Wage War’s new album which was really cool! That might have been 2015, but we’ll go with that.

Any upcoming releases or anything else from you guys we should know about?

Next Story:
Are YOU Nature’s Roundest Thing?