As a celebrated artist, Gavin Turk is difficult to name-drop.

People seem unable to make a personal or collective judgment on where he fits in the coterie of the Young British Artists (YBAs) who emerged during the 90s. Not achieving the shock and awe celebrity of Damien Hirst, nor the gauche intimacy of Tracey Emin, prefiguring the inevitable YBA hagiography Turk has already been described by The Guardian as ‘the intellectual one of the group’. Certainly during interviews Turk is the most verbal about his process, influences and aims, drawing in listeners with his insightful perspective, clear-eyed art theory pronouncements and puckish yet deprecating humour. Simply put, he’s a hard man to ignore. Turk’s work is characterised by its use of art history and a moving ground of art, artist and audience that shifts the idea of what we’re looking at and why. Speaking to Trebuchet he discussed what architecture means to him.

Why do you talk about working in an architectural way?

That’s not to say that I don’t appreciate the fact that some artists start out with a vague idea and start to construct something, and the thing they’ve constructed makes them think of other things, and they develop the object through the process of making that object. 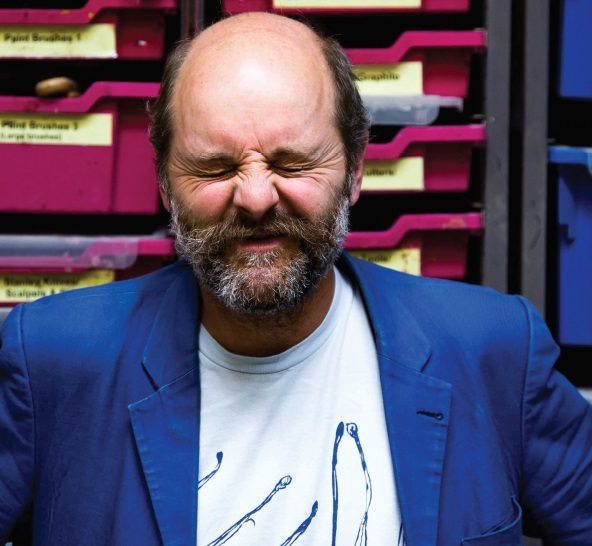 So they work more intuitively. I was trying to distinguish myself from that by talking about myself in an architectural way. I suppose it’s like designing the object rather than retrofitting the art object; a lot of the content is almost already in the object before I’ve even made it. For example, if I go to paint something, when I put my brush on the canvas and move it down in a certain kind of way, generally the only way I can understand that action is by somehow recognising what that artist or brushstroke is reminding me of – what historically that brushstroke represents for me.

I always see my activity in a very reflexive way. That was what I was trying to get to by saying I work architecturally, but I say this quite often: for me, art is something that requires audience. I don’t make art because biologically I need to. I do it culturally, so maybe there’s a need to behave culturally. As soon as I say that, I think, “Oh, I’m talking out of turn,” but there is a point where I say, “If I was on a desert island I wouldn’t make art.” I’d just fiddle around with sticks and stones and sand and coconuts, and obviously if a boat full of other people came along, they’d point and say, “There’s culture on this island.” It would be then that stuff would be attributed to culture, because the audience administers the context to make it art.

I self-consciously find myself making art which is about a kind of significance of audience. Audience is implicit within the object, and there is a point where within an object the audience finishes it off. They come to the gallery, they bring their preconceptions, they bring their knowledge, they bring their context and they see the artwork in a certain kind of way and understand it in a certain kind of way. That in itself starts to form the way that the object works, the way that the objects is, the way it exists, the way that is has meaning. But also, do I even see the artwork? There is point where the artist comes back to the gallery with their art on the walls and they can’t go and start fiddling with it themselves, get their paintbrushes out and rework the canvas; they’re not allowed to. At that point they are audience. They see their work alongside other artwork and they’re just ‘audience’ it in the same way that someone else might do it. Obviously, they’ve got all this stuff in their heads, but it’s the same, in a way.