Hubble looks into the galactic past 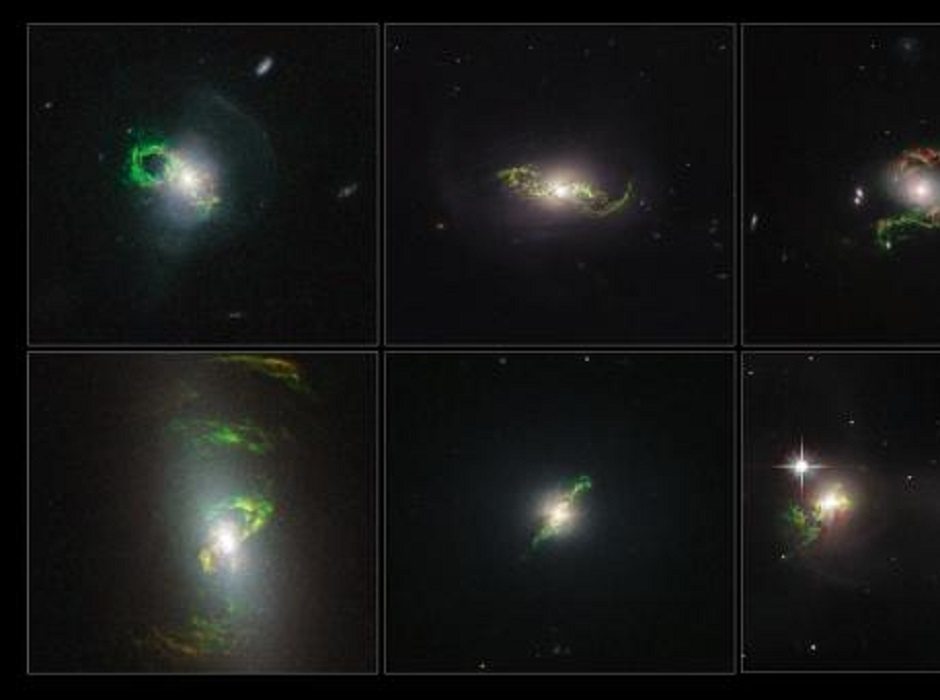 [dropcap style=”font-size:100px; color:#992211;”]T[/dropcap]hat ancient doomed galaxies from across the cosmos be spectacular is almost a given.

That they be so pretty is something of a serendipity.

The NASA/ESA Hubble Space Telescope has imaged a set of enigmatic quasar ghosts — ethereal green objects which mark the graves of these objects that flickered to life and then faded. The eight unusual looped structures orbit their host galaxies and glow in a bright and eerie goblin-green hue. They offer new insights into the turbulent pasts of these galaxies.

The ethereal wisps in these images were illuminated, perhaps briefly, by a blast of radiation from a quasar — a very luminous and compact region that surrounds a supermassive black hole at the centre of a galaxy. Galactic material falls inwards towards the central black hole, growing hotter and hotter, forming a bright and brilliant quasar with powerful jets of particles and energy beaming above and below the disc of infalling matter.

In each of these eight images a quasar beam has caused once-invisible filaments in deep space to glow through a process called photoionisation. Oxygen, helium, nitrogen, sulphur and neon in the filaments absorb light from the quasar and slowly re-emit it over many thousands of years. Their unmistakable emerald hue is caused by ionised oxygen, which glows green.

These ghostly structures are so far from the galaxy’s heart that it would have taken light from the quasar tens of thousands of years to reach them and light them up. So, although the quasars themselves have turned off, the green clouds will continue to glow for much longer before they too fade.

Not only are the green filaments far from the centres of their host galaxies, they are also immense in size, spanning tens of thousands of light-years. They are thought to be long tails of gas formed during a violent past merger (between galaxies) — this event would have caused strong gravitational forces that would rip apart the galactic participants.

Despite their turbulent past, these ghostly filaments are now leisurely orbiting within or around their new host galaxies. These Hubble images show bright, braided and knotted streams of gas, in some cases connected to twisted lanes of dark dust.

Galactic mergers do not just alter the forms of the previously serene galaxies involved; they also trigger extreme cosmic phenomena. Such a merger could also have caused the birth of a quasar, by pouring material into the galaxies’ supermassive black holes.

The first object of this type was found in 2007 by Dutch schoolteacher Hanny van Arkel (heic1102). She discovered the ghostly structure in the online Galaxy Zoo project, a project enlisting the help of the public to classify more than a million galaxies catalogued in the Sloan Digital Sky Survey (SDSS). The bizarre feature was dubbed Hanny’s Voorwerp (Dutch for Hanny’s object).

These objects were found in a spin-off of the Galaxy Zoo project, in which about 200 volunteers examined over 16 000 galaxy images in the SDSS to identify the best candidates for clouds similar to Hanny’s Voorwerp. A team of researchers analysed these and found a total of twenty galaxies that had gas ionised by quasars. Their results appear in a paper in the Astronomical Journal.

Next Story:
Officer?! There’s mashed potato on the Pentonville Road! [The Lovely Eggs]