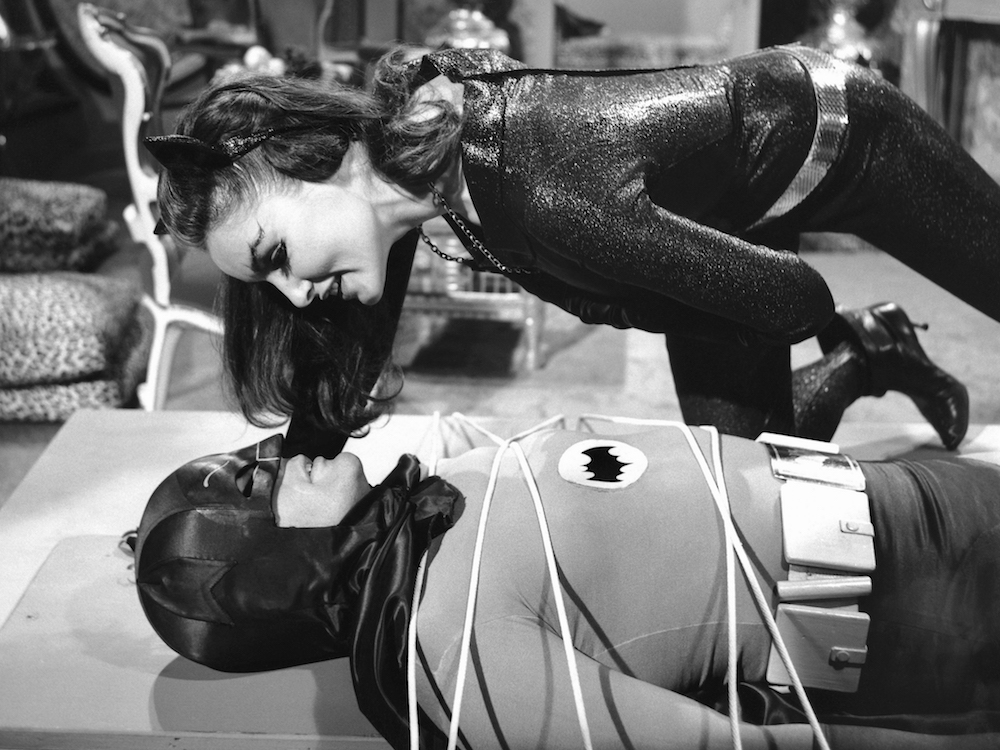 Barring no holds in either words or images, Hollywood Bound is a well-curated, hilariously captioned and wide-ranging collection of major-studio movie bondage. From a chained-up Harry Houdini in 1919’s silent Grim Game, to a ‘smoking hot’, leg-ironed 1967 Paul Newman in Cool Hand Luke, the book serves up equal helpings entertainment and old-Hollywood nostalgia.

In terms of recent history, the authors appear eerily prescient to the #MeToo movement, publishing five years prior to widespread use of the hashtag and ensuing outrage/abuse-of-power scandal. RAP editor-in-chief Tony Nourmand and rock ‘n’ roll journalist Peter Doggett deliver titillating humour with a sober side of pain and suffering, both literal and figurative. Indeed, within the decade, tales and testimony of casting couch sexploits, unwanted hotel room advances — and worse — would dominate headlines and send at least one studio mogul to prison.

And so, as Doggett cuttingly details in his two-page intro, Hollywood Bound’s 100+ movie stills unsubtly represent real-life perils faced by heartland rubes attempting to ‘make it’ in Hollywood. Serious commentary out of the way, from here, the book shifts into outright waggery, as the next 120-odd pages devote themselves to photo/caption format, reminiscent of Esquire’s long-running Dubious Achievement Awards.

With that, in an unchallenging attempt to best the entertainment value of a film industry awards show, here lie, submissively, for your reading pleasure, five tightly restrained and exquisitely tortured ‘-est’ moments ripe for exploration in Hollywood Bound:

Sexiest: blonde, enraptured Dorothy Granger chained and backed into a gargoyle-esque Roman statue… while a raging silverback gorilla menacingly approaches from her front. And that’s not the only reason Cecille B. DeMille’s Sign of the Cross (1932) ran afoul of the 1934 Motion Picture Production Code. Thankfully, in an enlightened 2020, the epic-master’s original, uncensored vision is again available; while Ms Granger survived her age 21, sadly uncredited, encounter to appear in well over 100 films. That said, upon her 1963 show business retirement, Ms Granger referred to Hollywood as an ‘ulcer factory’. Wonder why?

Campiest: in a practically genre-defining book, this one’s a spin of the chariot wheel. And it lands on, with implicit agreement from the authors: Ramon Novarro and Francis X. Bushman in Ben-Hur (1925). The tragically murdered Novarro, now recognised as Hollywood’s first gay icon, sports more eyeliner than Ziggy Stardust and Dr Frank N. Furter — combined. Meanwhile, Bushman gazes longingly across the miles separating their speeding death-machines despite (or because of… ?) Novarro’s leather whip around his throat.

Blue-Steeliest: Charlton Heston in The Ten Commandments (1956). Need more be said? Just lock your eyes on his piercing ocular orbs and envision the forthcoming punishments.

Wittiest: directly quoting from Hollywood Bound: ‘Casino Royale (1967) Woody Allen as the ultimate Bond villain, fiendishly trapping his victims before launching into a three-hour routine of psychiatrist gags.’ For sarcasm, hyperbole and a sweet Woody Allen burn, this caption beats all. Photo-wise, the late Israeli siren, naked Daliah Lavi, generates sufficient heat to melt her achingly cold, metal restraints. Alas, if only the authors had photoshopped Mr Allen out…

Edgy-est: photo from 1963 film adaptation of Jean Genet’s play, The Balcony. Ultra sultry, black and beautiful Ruby Dee, on trial for thievery, sits imperiously in an electric chair (ruthlessly efficient, if short on due process). Dee, clad in a low-cut, crocheted mini-dress has turned the tables on Peter Brocco’s white (and white-wigged) ‘judge’. He kowtows to her ebony majesty and submits to licking the toe of her white pump. If this one doesn’t inspire a search engine session, the reader is either libido-less or the grid is down.

Bonus award: past-his-prime-est: Johnny Weissmuller, Tarzan and the Mermaids (1948). Vine-trussed JW faces down a scimitar-wielding, Eyes Wide Shut mask party dom. Reportedly, due to first known use of a studio-mandated body fat % clause, the five-time Olympic-gold-medal-winning Tarzan shed his loincloth after this one and assumed the khakis and bush-hatted role of Jungle Jim.

Hollywood Bound: just add two snifters of Cognac, a sumptuous leather couch and your preferred captor (or –ive). At least one of you’ll be screaming like a train-track-tied starlet.