Sinister Funtime is twisted and wretched. The whole album is a crazed booze-fuelled sex-beat for delinquents everywhere.

[dropcap style=”font-size:100px; color:#992211;”]A[/dropcap]ll those lonely hours spent kneeling beside my bed last year in self-flagellation and prayer to Papa Legba, waiting for a glimmer of light to shatter the cold and empty musical darkness of 2012 finally paid off when Hank Ray and The Raymen released their outstanding EP, Death’s Black Train.

It titillated and aroused, luring us into the sick and sleazy world inhabited by Hank Ray and The Raymen. It hardened us to their dirty mutated sound, shook us violently from the roots and left us baying for more. Death’s Black Train was a salty taste of much bigger things to come.

The tease is over and the long anticipated new album, Sinister Funtime, is finally due for release on 19th April (the anniversary of the death of the wicked Lord Byron).

With the passing of one form of wickedness, another is born. Just as ‘Long Tall Shadow with Fire Eyes’ paid homage to Lux Interior on the aforementioned Death’s Black Train, you know this mother is set to deliver on every god damned level as soon as you notice the tip of the hat to Blind Lemon Jefferson with ‘Snake House Moan Blues’.

“Well, little baby Jesus cut his wrist
Said he just couldn’t go on like this”

With a sock to the jaw delivery, this platter showers you with everything the EP promised plus some very pleasing surprises to boot. The album is a true ghoul B-movie monster classic, stitched together from the decaying rotted corpses of dead rock ‘n’ roll royalty. The creature is horrific yet mesmerizing to look upon. Once you gaze into the maddening eyes of this beast, it is nearly impossible to break away. It will hold you in its hypnotic grasp, bend you to your knees and force you to do its evil will.

Sinister Funtime is twisted and wretched. The whole album is a crazed booze-fuelled sex-beat for delinquents everywhere. It will make you want to guzzle bottles of cheap red wine with Absinthe chasers, snort forbidden substances, slash your throbbing chest with broken glass, jump around uncontrollably like a mescaline crazed savage, smash broken pool cues over innocent bystanders’ heads and auto-asphyxiate in a wardrobe full of stained latex in a dirty, sleazy, lonely back street hotel room.

It is a lesson for teenagers and a warning for adults.

Listeners beware. The Raymen come out fighting on this filthy piece on vinyl and offer you no less than thirteen (what else?) sick rock ‘n’ roll tracks to choose from. Be en garde, the first three come at you hard and fast in a turbo charged high-velocity assault of rocking beats. They get the first jaw crunching punch in with ‘Nevada Blitz’, uppercut you with ‘Goodbye Goodbye Gun’, then smash you with a sweet right hook to the head on ‘Slave to the Sickness called Love’.

If you are still standing after this barbaric onslaught, it becomes clear the album is a pure exhibition match.

“Smells like diesel smoke and burns in my eyes”

All the tracks (including nougats from the Death’s Black Train EP) are musical gemstones. Every twisted hoodoo-voodoo chord and pumping psycho-death beat is skillfully executed. 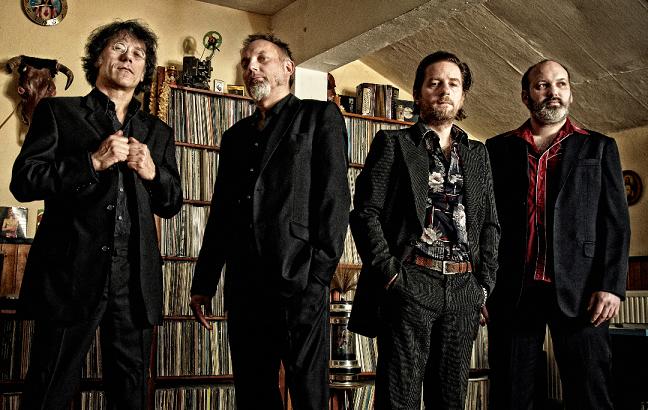 Ooh ma-ma, ‘Tightrope Walk Over Fire’ shakes a shrunken headed topped voodoo stick at The Trashmen and virtually out-Cramps The Cramps (Lawd forgive me), whilst tracks six, ‘Intoxicated’ and thirteen, ‘Ugly Inside’, make you feel like the last suicidal no-hoper drunk in a dimly lit bar in Nowheresville, sipping neat Tennessee whisky, chaining a pack of Lucky Strikes and weeping whilst getting sucked off by the waitress. (I’m sure somewhere in ‘Intoxicated’ there is an ultra discreet nod to The Revels’ ‘Intoxica’, although this could be my wild imagination).

‘Ugly Inside’ is a beautiful sad lonely lament with some exquisite guitar work that drips hot salty post ejaculation tears over Ray’s down and dirty baritone drawl (it would not be out of place on Nick Cave’s new album).

Sinister Funtime slices open the soft underbelly of American trash culture, rips out the diseased star spangled heart and pokes at the fatty entrails with post-adolescent humor. The echoes of Cash, Presley and Interior can all be heard in the deathly zombified graveyard gravel of Ray’s unique vocal tone whilst the ghostly spirit of Link Wray himself seems to have been invoked to wrap his boney spectral hands around the fretboards of The Raymen’s guitars, hitting those eerie distorted rumble chords for all they’re worth.

Compared to this unholy silver bullet from Berlin offered by The Raymen, all other modern day death/blues/country/psycho rockabilly bands have the consistency of a wet tuna fish sandwich.

If you thought the original essence of said death/blues/country/psycho rockabilly was dead, this most surely is a rebirth. Long live shock ‘n’ roll.

*Not to be played to insecure teenagers.

Next Story:
Flu cure is here?

One Reply to “Hank Ray and The Raymen : Sinister Funtime.”