Greening the Battlefields (but destroying the planet?) with Transgenic Grass

With their craziness and hibrid monster fantasies.
Beware the things they do!
They’re geneticising monsters with geneti-glue.

As with drone surveillance or fracking, the pace of ethical debate and measured reflection on potential repercussions moves too slowly to interest the practitioners of transgenic plant propogation. With the gleeful nonchalance of a dog lolling its head out of a speeding car’s window, the beckoning light of fat research grants, corporation-funded laboratory refits and tenured university appointments draws the tunnel-visioned toward ever more whizzbang applications of potentially world-destroying scientific practice, without ever slowing to apply sci-fi’s most enduring and oft-repeated truisms: it’s not whether we can do it, it’s whether we should do it.

Which is why, when you go pissing around with the very blueprints of life itself, it pays to get the clickbait drooling proles onside by having a ‘humanitarian’ angle. ‘It’ll help feed a starving world’ is one such self-serving mantra. ‘It’ll help clean up the pollution of military waste’ is another (albeit even less convincing than the first).

If you still need convincing, we direct your attention to the final line of the press release: ‘The research was funded by U.S. Department of Defense.’

But those explosives and munitions leave behind toxic compounds that have contaminated millions of acres of U.S. military bases — with an estimated cleanup bill ranging between $16 billion and $165 billion.

In a paper published online in Plant Biotechnology Journal, University of Washington and University of York researchers describe new transgenic grass species that can neutralize and eradicate RDX — a toxic compound that has been widely used in explosives since World War II.

UW engineers introduced two genes from bacteria that learned to eat RDX and break it down into harmless components in two perennial grass species: switchgrass (Panicum virgatum) and creeping bentgrass (Agrostis stolonifera). The best-performing strains removed all the RDX from a simulated soil in which they were grown within less than two weeks, and they retained none of the toxic chemical in their leaves or stems.

It is the first reported demonstration of genetically transforming grasses to supercharge their ability to remove contamination from the environment. Grasses are hearty, fast-growing, low-maintenance plants that offer practical advantages over other species in real-world cleanup situations.

“This is a sustainable and affordable way to remove and destroy pollutants on these training ranges,” said senior author and UW professor of civil and environmental engineering Stuart Strand, whose lab focuses on taking genes from microorganisms and animals that are able to degrade toxic compounds and engineering them into useful plants.

“The grasses could be planted on the training ranges, grow on their own and require little to no maintenance. When a toxic particle from the munitions lands in a target area, their roots would take up the RDX and degrade it before it can reach groundwater,” Strand said.

RDX is an organic compound that forms the base for many common military explosives, which can linger in the environment in unexploded or partially exploded munitions. In large enough doses, it has been shown to cause seizures and organ damage, and it’s currently listed by the Agency for Toxic Substances & Disease Registry as a potential human carcinogen.

Unlike other toxic explosives constituents such as TNT — which binds to soils and tends to stay put — RDX dissolves easily in water and is more prone to spread contamination beyond the limits of a military range, manufacturing facility or battleground.

“Particles get scattered around and then it rains,” Strand said. “Then RDX dissolves in the rainwater as it moves down through the soil and winds up in groundwater. And, in some cases, it flows off base and winds up in drinking water wells.”

Wild grass species do remove RDX contamination from the soil when they suck water up through their roots, but they don’t significantly degrade it. So when the grasses die, the toxic chemical is re-introduced into the landscape.

Co-authors Neil Bruce and Liz Rylott, biotechnology professor and research scientist, respectively, at the University of York and colleagues had previously isolated enzymes found in bacteria that evolved to use the nitrogen found in RDX as a food source. That digestion process has the added benefit of degrading the toxic RDX compound into harmless constituents.

The bacteria themselves aren’t an ideal cleanup tool because they require other food sources that aren’t always present on military training ranges. So Bruce and Rylott tried inserting the bacterial genes into plant species commonly used in laboratory settings. Those experiments proved that the new plant strains were able to remove RDX contamination much more successfully than their wild counterparts. 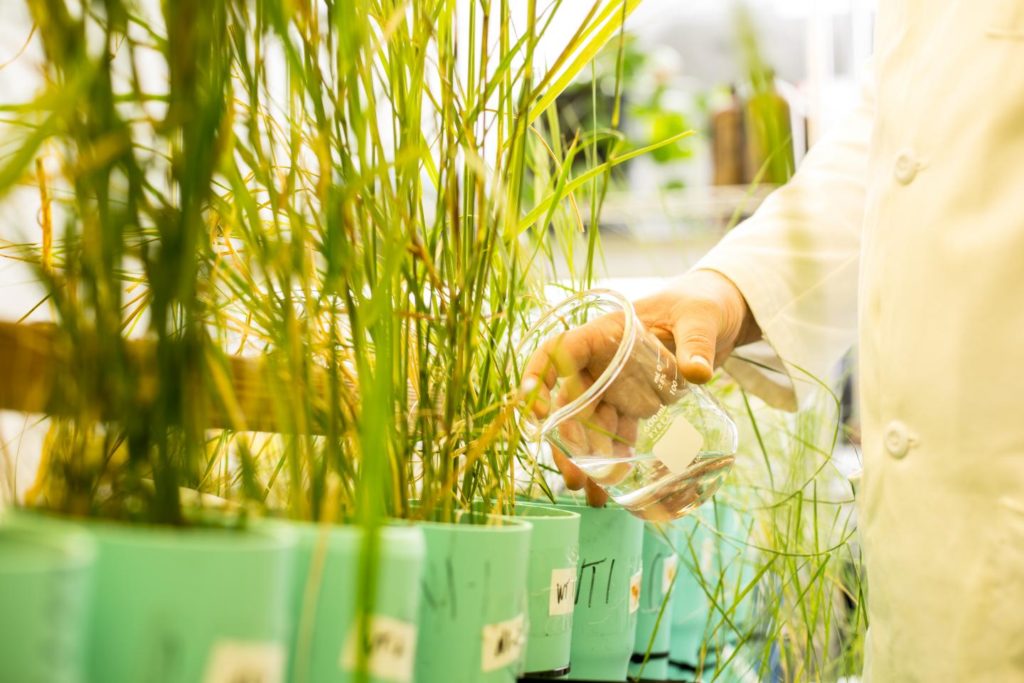 “Considering the worldwide scale of explosives contamination, plants are the only low cost, sustainable solution to cleaning up these polluted sites,” said Bruce.

The UW team of civil and environmental engineers spent eight years working to express the same genes in plant species that could stand up to real-world use. They needed a hardy perennial species that grows back year after year and that has strong root systems that can bounce back after fires.

Grasses fit that bill, but they are more difficult to manipulate genetically. In particular, the UW engineers had to build into their gene constructs robust monocot “promoters” — or regions of DNA that cause a particular gene to be expressed — for the process to work in grass species.

“For cleaning up contaminated soils, grasses work best, but they’re definitely not as easy to transform, especially since flexible systems to express multiple genes in grasses have not been used before,” said first author and acting UW instructor Long Zhang.

The research team also found another unexpected side benefit: because the genetically modified grasses use RDX as a nitrogen source, they actually grow faster than wild grass species.

Next steps for the UW research team include limited field trials on a military training range to test how the strains perform under different conditions. Wider use would require USDA approval to ensure that the genetic modifications pose no threat to wild grass species.

“I think it would be ecologically acceptable because the genes we’ve introduced degrade real pollutants in the environment and cause no harm,” Strand said. “From my perspective, this is a useful technology that’s beneficial to the environment and has the potential to remove dangerous legacy contamination from decades of military activity.”

The research was funded by U.S. Department of Defense.

Next Story:
Lights From the Sky (Touchstone)