A sentence more usually associated with the verbal drivel flabbing out the vacuous guff of free-newspaper horoscopes, but in this case, a bona fide hypothesis deriving from the ESA’s Venus Express mission.

An international team of scientists has found some of the best evidence yet that Venus, Earth’s nearest neighbor, is volcanically active.

In combing through data from the European Space Agency’s Venus Express mission, the scientists found transient spikes in temperature at several spots on the planet’s surface. The hotspots, which were found to flash and fade over the course of just a few days, appear to be generated by active flows of lava on the surface.

“We were able to show strong evidence that Venus is volcanically, and thus internally, active today,” said James W. Head, a geologist at Brown University and co-author of a paper describing the new research. “This is a major finding that helps us understand the evolution of planets like our own.”

The research is published online in Geophysical Research Letters.

The hotspots turned up in thermal imaging taken by the Venus Express spacecraft’s Venus Monitoring Camera. The data showed spikes in temperature of several hundred degrees Fahrenheit in spots ranging in size from 1 square kilometer to over 200 kilometers.

The spots were clustered in a large rift zone called Ganiki Chasma. Rift zones are formed by stretching of the crust by internal forces and hot magma that rises toward the surface. Head and Russian colleague Mikhail Ivanov had previously mapped the region as part of a global geologic map of Venus generated from the Soviet Venera missions in the 1980s and U.S. Magellan mission in the 1990s. The mapping work had shown that Ganiki Chasma was quite young, geologically speaking, but just how young wasn’t clear until now.

“We knew that Ganiki Chasma was the result of volcanism that had occurred fairly recently in geological terms, but we didn’t know if it formed yesterday or was a billion years old,” Head said. “The active anomalies detected by Venus Express fall exactly where we had mapped these relatively young deposits and suggest ongoing activity.” 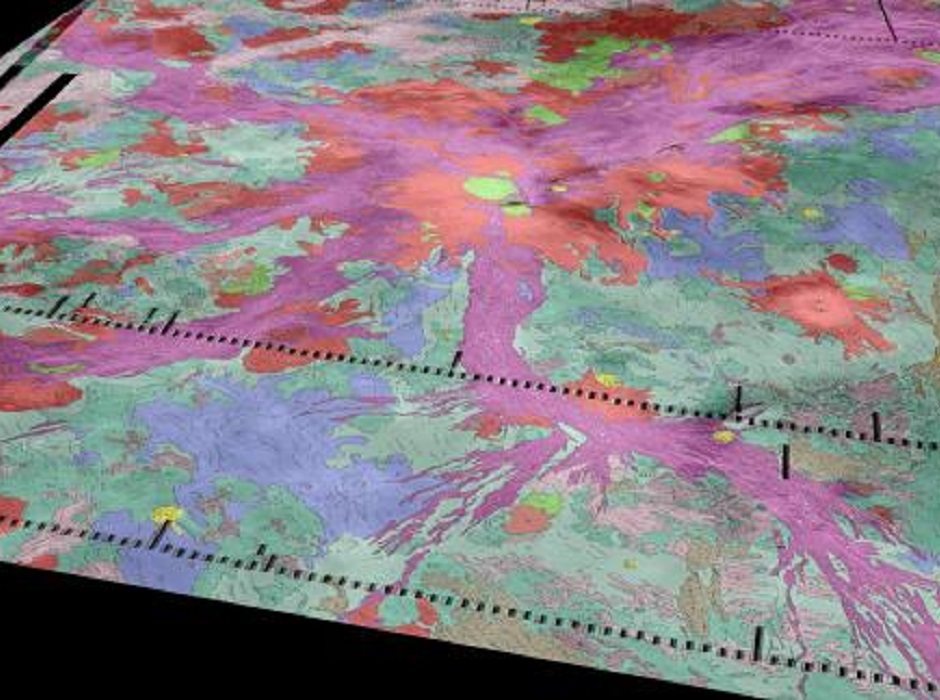 [Radiating our from the Venusian volcano Ozza Mons (red, center) are thousands of miles of rift zones (purple). Data from the Venus Express spacecraft suggests there are active lava flows in hotspots along the rifts. Volcanism in action?]

The latest finding is consistent with other data from Venus Express that have hinted at very recent volcanic activity. In 2010, infrared imaging from several volcanoes seemed to indicate lava flows from thousands to a few million years old. A few years later, scientists reported transient spikes in sulfur dioxide in Venus’ upper atmosphere, another potential signal of active volcanism.

The observation of hotspots by Venus Express, combined with the geologic mapping from Venera and Magellan, make a strong case for a volcanically active Venus, Head says.

“This discovery fits nicely with the emerging picture of very recent activity in Venus’ geologic history,” he said. “These remarkable findings were the result of collaborations spanning many years and many political borders. They underscore the importance of international collaboration in exploring our solar system and understanding how it evolves.”