A perfect if less mindblowing record from post-rock doomfathers Neurosis

[dropcap style=”font-size:100px; color:#992211;”]T[/dropcap]
he problem with having a canon of legendary recordings is that the past informs expectation.

Broken Ground is the high watermark of the album, where Neurosis give the fullest expression of the apocalyptic country and wasteland sound they’ve been teasing over the last releases. The country influence has often been explored by metal acts both as Americana anachronism and as a emotional starting point (See Metallica’s Load) and here Neurosis (along with Buffalo Tom, Jesu, Red House Painters, Tom Waits, and Johnny Cash) 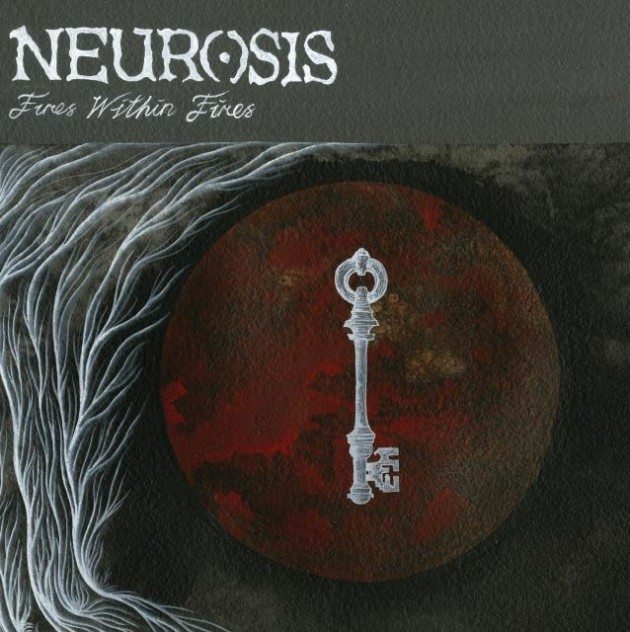 give their account of a spiritual hinterland we glimpse between cities, from bus windows past the parking lots of rural petrol stations, and those 3am moments when the something rises cold from suburban streets and creeps into the soul.

Starting with a groaning electronic ambience and rising into the trademark guitar overtures, Broken Ground is a masterpiece of arrangement. Several layers of harmonies weave perfectly over each other, drawing aspects of the deep vocal out from the centre and into your heart. It’s up there with the best music Neurosis have ever recorded and should be heard for yet another mesmerising example of where their dark ambient work reaches an ego-destroying pinnacle of perfection.

Not as much can be said for the rest of Fires within Fires, which seems eclipsed by the heights of Broken Ground rather than using the pedestal to exalt other virtues. Closing the album at an epic ten minutes, Reach contains a good summation of what Neurosis is about: a delicate build that draws the listener in close before battering them with a incredible riff. The counterpoint of the main guitar stomp and a descending grind is inspired. However, it comes in after seven and half minutes of quietude that might have been better if truncated or varied.

Fires with Fires is another fantastic Neurosis record and respects both the fans and the band. However it is not an essential record when compared to the classic run of albums from Souls at Zero, Enemy of the Sun to 2003’s collaboration with Jarboe. In the end, both Broken Ground and Reach justify the purchase of the album, so do it.

Previous Story:
The Birthday Massacre (live at the Garage, Islington)

Next Story:
Worked to Death: The Key to Making High-Stress Jobs Less Lethal