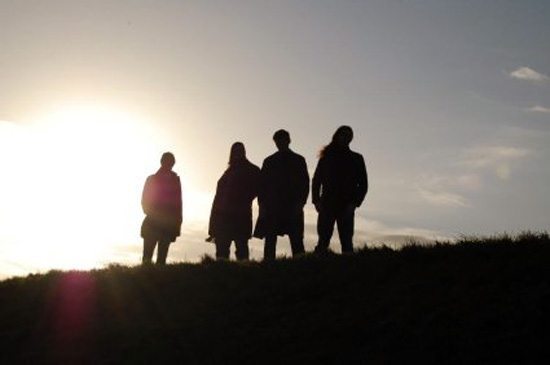 Shouted whispers across a hunter’s field. Epoch is the intense third release for this English quartet that owes as much to Alan Moore as it does to King Crimson. This is a great release from a band we’ll hear a lot more from and so for this review let’s follow the tracks deep into the Fen. 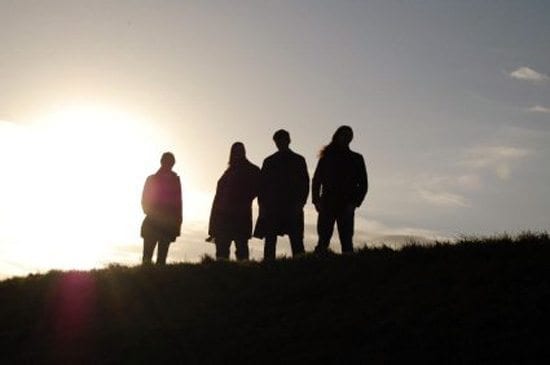 Epoch:
Sprawling, My Bloody Valentine atmosphere with almost whimsically This Mortal Coil touches, shimmering chords under raging drums, thoroughly and deliciously Twin Peaks noir.  Great opener, is this an album or a gig? Who cares I’m absolutely along for the ride.

Ghost of the flood:
Intense, blast of metal noise with a melancholy air, bolstered by real songcraft. Every chord change seems to go down yet in an archly optimistic way. The vocals contain laudable elements of California era Mr Bungle and complemented by poignant and understated Pavement-esque guitar lines.

Try to ignore the growled vocals, if left out… the music itself has a Muse-like soaring pop quality.

Despite having sort of elements of balladry the song avoids the traps of American contemporary metal softies by avoiding sounding whiney. Here is formed adult emotion, not a 30-something revised history of teenage malady.

‘Someday rains will come again’ is wistful and nice but musically the song is too good to be wasted on atmospheric impressionistic lyrics. Being more direct thematically would lift the band into the next level of artists, who aren’t merely great but important.

The Gibbet Elms:
Beautifully complex drumming and interlocking bass and guitar lines are fantastic worked here. I keep coming back to the drums… the washes of guitars and keyboards somewhat obfuscate the crisp beats and tasty bass playing on this track. Really wonderfully prog, chordally more Yes than Crimson… but in a good way.

Distortions and washes of sound really mask something fantastic going on musically. Band embarrassment? Makes you wonder about the nom-de-plums (Aedelwalh, Theutus, The Watcher, Grungyn), are Craigs, Brians, Duncans and Steves not able to make this sort of music? Probably a legacy thing from earlier bands.

Vocals come into their own around 5.38 – Yeah! why doesn’t he shout-sing like this more often, it is genius and fits perfectly.

Of Wilderness and Ruin:
A cathartic release, once again fantastic drums, they sound great punchy and awesome, backing vocals very Neurosis-esque. In fact the whole track takes a number of nods from the great band.  Destined to be a huge huge track live.

Of Half-light Eternal:
Okay so this is almost too Showgaze, one expects the 4ad record contract to be forthcoming any second. Wait a minute. What’s happening here. Enter extreme gear change coming up? Slowly threatens to be a real church burner and then torches the village.

Carriers of Echoes:
Okay, so tapping into Red Hot Chilli Peppers proto-funk basslines maybe wasn’t the best idea. Weakest track on the album so far. The hell for leather central rock out premise, sounding a little done by this stage but is given a unique treatment here with the medieval BVs, reminiscent of Happy Mondays Hallelujah. Track goes into a nice syncopated bit but falls short a little bit, overshadowed by better tracks. Guitar solo was nicely done, could have been cleaner sounding though.

A Waning Solace:
The bass sound needs to be deeper, way too trebly and the guitar sound is a bit annoying. A touch of home stereo EQing fixes the issue, but the Fender Precision Duff McKagan era Gunners sound is a bit cloying. Similarly, the guitar effect could have used less tremolo and more chorus, perhaps with a bit of Q-tron, especially since they’re going for a sort of disorientating Tool-esque mystical vibe. Not really feeling this one. Am starting to think that the drummer is the star of this album, his playing ain’t flashy but has a sort of subtle texturing and post-fugazi kiltered groove that works quite cleverly. The singer really gives it some, he ain’t faking it that’s for sure.

I can’t help but feel that this is a really happy bunch of guys… despite the emotional content of their music. These are guys that really love playing music and each other. There is a palpable sense of Bon Homie to this track, it’s like sitting next to table of pissed up long hairs and hearing the three day bender end: ‘I love you, you fucker’. Of course, that could be the mix, cuddly but accurate. Okay, the Death Vangelis keyboard sound is officially getting on my tits.

Ashbringer:
Now that is the way to start a track. I have to hear that again, much much louder. Hells yes, this is how you end an album and probably the pre-encore set. They have really got it down on this one. After listening to album as a whole a couple of things stand out, I wish in places not everyone played all the time, the keyboard might be better utilised playing tuned field samples or something similarly experimentally unique in parts. The noise drenched guitar sound while awesome, in places hides the tonal variations in favour of a sort of wash, which becomes a touch samey. But this is nitpicking against what is overall a release both confident and convincing. A solid album by a band that sounds like they can kill it live. Recommended.

Next Story:
‘I Want to Fuck You’ – Derrick Santini