Korean artist Tae Kim on the portraits she draws from cyberculture. Part 2 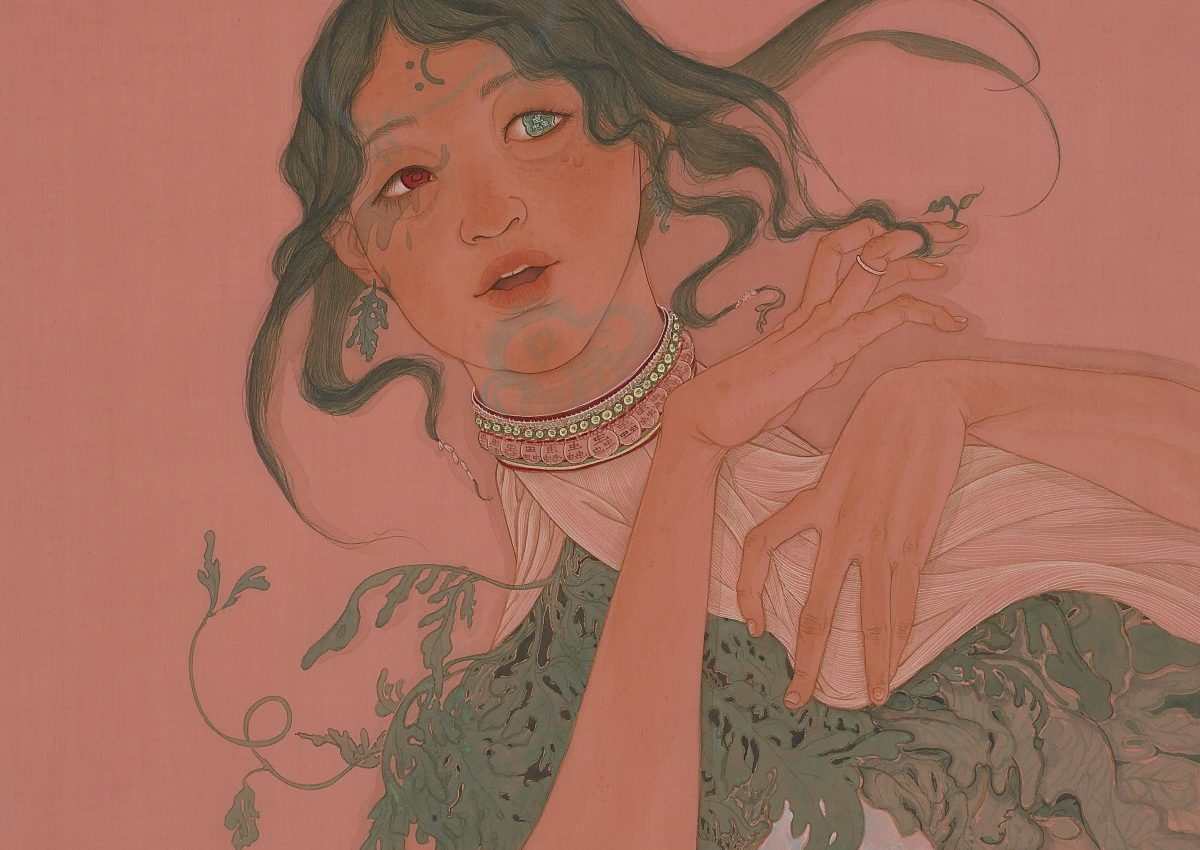 Tae Kim paints the people she meets in online games. Winners and losers, these are the people she’s competed against and in their reactions she sees their humanity. In some disciplines of East Asian painting the soul is captured in an ecosystem of physical and metaphysical details, using the same perspectives and techniques Kim paints the souls of gamers via a palimpsest of cultural symbols, portraiture and speculative biology.

Continued from last week Tae Kim spoke to Trebuchet for our process issue she describes the intricacies of her work.

That’s always present in the sub culture genre. And also, because it’s a subculture, it’s sometimes very heavily sexually oriented, I tend to try to go gender neutral in all of my works, because I don’t ask for their gender, I don’t really care about their gender. For me, the whole thing is just the wanting of human touch within a world where nothing can be touched. Because it’s all binary codes, if you look at my other works, they’re all non-gender looking, even though they look a certain thing, a certain sex.

I suppose this series started after I went to an online funeral. This is where all my work started when in a game I played another player I knew was taken by suicide. The character was logged in, even though the player was gone, the character was always there. And we actually went to a different server for this, this person’s funeral. I have the the screenshot of when they were doing the funeral. Where I come from I’ve grown up with having life death and hierarchy within the game. So in 2006/2007 my work started wanting to paint someone or feeling I had of somebody within the online world.

There’s a complexity with people because people play different characters depending on which game they’re in or even different characters within the same game as well. That’s something I’m questioning. In my portraits of these people. So when I’m interviewing these people for reference. That is me trying to possess them by painting them. But this is their voice, so this is what the face, what I paint, is about. This is the process of my work and this is the environment that I play with people.

For this one painting, I only met him after the show was out. I didn’t even know his physical face until the show was on. My work starts by questioning people and trying to engage and ask them about their personal things without knowing their faces and trying to form their face. And then actually drawing them in a painting.

For instance, there was this middle schooler, who said, ‘I like the colour black, and that’s why I chose this character’. That was her the whole theme because in this particular game, you can make your own character or you can actually download other characters. Her character was made by herself so that was the image that was how she wanted it to look, which reflected a culture of self-characterisation.

It’s a sort of the second layers of multiculture of taking identities, borrowing identities, creating identities. And from that point on, you start making your own identity within that identity that you either stole, took or downloaded. Or created.

Where’s the where does the self come into your work? I imagine you have some thoughts about where authenticity sits?

I told you about how the system is not ready for 100% portraying a person. And that all goes back to my black cow painting series, which refers to how you are systematically driven by the gaming companies to use more money and time in order to compete with other people. Meaning that the platform that we use will dictate the form, or have a part in, forming or amplifying a person’s identity, even technical limitations impose a structure. So thinking about how authentic you can be, perhaps the most? If part of you wants to be a very fluffy Panda, you can be. But if you want to do that 24/7? Perhaps not. Similarly, in the game, you can’t do it, but you can do it in a different game.

So each game has its possibilities and identities based on what you can do. For instance, you might want to be a nice farmer, in the little forest game, or farming games, where you can basically plant and harvest. Or you want to be the God Almighty, you want to make something, you might go to Sims, to become the God or the creator. Actually, it’s more of an amplifying effect within yourself that feels, wishes and needs in a certain way. In VR chat, mostly people are wanting to talk, they don’t want violence. if you have a violent person who comes in and screams or swears, we just block them off, and they just disappear.

Is there a contradiction between being an artist who is investigating, perhaps championing the online and virtual world, and creating physical works?

Post-covid many museums are having this dialogue the most, do you need to? Do you need the physical place to actually show work? Or is showing it online enough? In both cases you obviously need the presence of the place for a work to be shown and understood.

Online, it’s much more you can watch it in detail, and you can do it on your own terms. For me, artists, community wise, it’s half enough, because you do have Instagram art people within Korea, where everybody on Instagram knows this artist. But if I asked someone, did you connect with the artist when you went to their show? The answer might be no, as they weren’t present.

On instagram people are very active; they seem to know all the artists. but everybody doesn’t know that person. That’s a possibility. However, there is a problem where some art only really looks good on a screen.

I have quite defined boundaries for my work because my works are made through a method of reverse painting, which is when you paint on the reverse side, so that the pigment doesn’t sit that much on the surface. So as jpegs it’s quite hard for these paintings to be shown as I desired. The layering of pigments on top that looks real skin has to be seen physically to give the full effect.

Why are the eyes different colours?

They symbolise the multi-persona aspects which sit in the whole idea of Eastern painting. In Eastern Asian painting a person’s soul is within the eyes and if you do not get the eyes right, you’re not getting their soul right. The question for me is what if your soul is in parts? And the body is one of the parts? What do you do to capture the soul. That’s why there are different eyes in my paintings. If you look closely they would have writings in them as well which is a comment on the text based world that we’re living in. We think in text, and the rectangular pupils of the portraits show this as well. That’s my comment on how we see every image as a pixel. We don’t see it as a whole. I have many iconic symbols there. I’m asking where the soul is within this new world.

Next Story:
The Being Beyond Feeling: Peter Van Dyck Pt 1