This room is a mess; clothes litter the floor, a broken piece of artwork has its place in this room, I have a to-do list but writing is pulling weight and the importance of The Eye of Time’s short but well-compiled retrospective album, Acoustic, is forcing the agenda.

It is at times like these that you need music like Marc Euvrie’s (for it is Euvrie who is the composer/performer behind the moniker) : simplistic, organised and littered with progressive overtones of things that have been and have gone. The album Acoustic places you in a paused sense of feeling, a disruptive and causal sense that yesteryear and future are being played out. Acoustic removes the fact that invaluables and bric-a-brack of lame years gone-by are putting my dopamine levels well into category Z, and lets me concentrate on the beauty of music once again.

Thosee dopamine levels are still low as the album plays through. Luckily, the music produced on the album is knitting up a woollen jumper that comforts. The stress and complexity of writing has quickly led me to slipping on the slippers and putting a cigarette in my mouth. I spark it, Marc Euvrie has gotten into my head already.

The pain of yesterday: drinking alone seeps into the memory banks as Euvrie’s music drums through the walls into the garden outside and probably into next door’s. I drag deep and inhale fumes, the grass looks overgrown and shabby, and the pedal player on the piano upstairs is grating on my brain. I exhale, placing ash on the grass as a curator of overtures with the cello, Marc Euvrie, plays on my brain.

Track one, ‘Deadsea’ starts off profoundly simple, as is most of the album. Steady fingerwork and a concentrated brain for right and left to play high and low together. ‘Send me a live album next time please!’ is what I want to say, as I feel a lot of dupe the loop has happened on the recording –  i.e., one cannot play part of the piano pieces naturally due to technical loops off a computer, and this happens a lot across the album. If it were to be played live it would need a number of pianos or cellos to provide the piano and cello input.

The pimp I saw last night with a girl relives in my memory banks as Euvrie plays on, Euvrie frames this memory for me in music: intimidation; trembling hands pressed up against the wall, a screen shot of previously-told poisoned sugar sweet lies of protection and love. I think of the pimp and her: the greasy hair, the dishevelled look, the tears. I have lost the consciousness to follow the nod to the exit because Euvrie is now in the background as I run over the memory again. 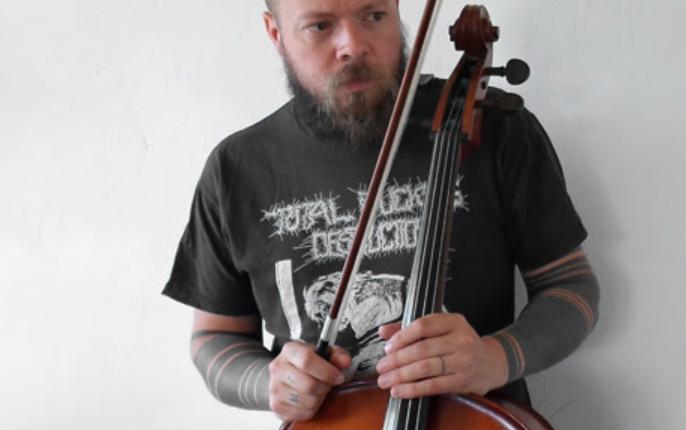 As the piano and cello work hand in hand in Euvrie’s music, intimidation and vulnerability work hand in hand, the need to intervene is strong and you almost want to intervene in Euvrie and stop him from mixing the two instruments. No amount of will and my own intervention for her sake would have changed the future of her night. I said something to them and he walked away, and here Euvrie’s steady pedal piano plays on.

I’ll move on to track two, ‘Rondane’. Rondane is a national park in Norway. Reviewing really allows for good bits of pub quiz trivia sometimes. And yes,  the sound of ‘Rondane’ is very national parky and very beautiful to a point.

There is a lot in The Eye of Time’s music for me that says let this one pass, obviously there is no need for lips to tremble and for backs against the wall or for tears to be spilt, but the peacefulness in which Euvrie presents music to the ears says she will sort it out by herself. Setting music to a memory situtation is a weird thing to do, try it out….

Track three, ‘Catalonia 1936’. I believe that the music may fit the mold more here; revolutionary Catalonia is well documented. The track builds up to less than nothing, and rebuilds, and continues to do the same until it finishes in a bit of a flurry. Overall the piece is a mess. ‘Catalonia’ plays out to be all over the place, and is looped again. The music is deliberately allegorical of Catalonia’s turbulent Civil War era, it would seem.

Her head says one thing as her body says another, she blows me a kiss after I interrupted them and broke them apart with the help of one of his gang friends. I can see the resemblance between the two; Euvrie and her. She seems calmer and happier now, and I imagine so is Marc Euvrie, now that I’m going to stop the innate chatter about how to frame his sound in story and start to analyse his music.

Those allegorical, and applicable, passages continue, referencing places and times to add historical (and in the case of track six, a speculative future) context to the stark pieces. Track five, ‘Exarcheia’ invites the listener to contemplate September 2008-February 2009, in the anarchist centre of Athens, Greece. Beyond that, it’s not obvious what the connection is, although the cello says a lot on this track.

Track six, ‘Somewhere’ 2041, definitely more upbeat. There’s something about this song that says that Euvrie is going somewhere but we probably won’t be following him.

Please go listen to it for yourselves and make your own judgement. If you’re into classical piano and cello being played in a relatively minimalistic way please enjoy it at your own risk; you may be turned into a futuristic anarchist, or a modern day Greek one, or a Catalonian-styled one from the 1930’s.

About NAP and Nico 20 Articles
NAP & Nico. is a writer, a painter, a poet, a illustrator and writer of a disabled squirrels children’s storybook . An academic yet to set the world on fire, but who is holding a Zippo beneath the Zepplin carrying modern society's scene that will wonder why they hadn’t heard of NAP & Nico before.