Little has changed in the stand-off between religion and science, we might be tempted to think.

[dropcap style=”font-size:100px;color:#992211;]A[/dropcap]t a meeting of the British Association in Oxford on 30th June 1860, a famous encounter is reported. Samuel Wilberforce, Bishop of Oxford, poured scorn upon Charles Darwin’s new theory of evolution. T. H.  Huxley rose to defend On the Origin of the Species.

Accounts differ, but here is Huxley’s own recollection:

Samuel thought it was a fine opportunity for chaffing a savan [sic] – However he performed the operation vulgarly and I determined to punish him – partly on that account and partly because he talked pretentious nonsense. So when I got up I spoke pretty much to the effect – that I had listened with great attention to the Lord Bishop’s speech but had been unable to discover either a new fact or a new argument in it – except indeed the question raised as to my personal predilections in the matter of ancestry – That it would not have occurred to me to bring forward such a topic as that for discussion myself, but that I was quite ready to meet the Right Revd. prelate even on that ground – If then, said I, the question is put to me would I rather have a miserable ape for a grandfather or a man highly endowed by nature and possessed of great means of influence and yet who employs those faculties and that influence for the mere purpose of introducing ridicule into a grave scientific discussion – I unhesitatingly affirm my preference for the ape. Whereupon there was inextinguishable laughter among the people – and they listened to the rest of my argument with the greatest attention … I believe I was the most popular man in Oxford for full four and twenty hours afterwards.  (Lucas 2018)

Little has changed in the stand-off between religion and science, we might be tempted to think.

Certainly, Huxley shines with the same brash confidence of Richard Dawkins. Indeed, the interested reader might like to view the Oxford debate between Professor Dawkins, Professor Sir Anthony Kenny, and Archbishop Rowan Williams appended to, ‘Philosophy and the God of Bleak Things.’

On the Origin of the Species, it has to be said, changed the balance of power, but the stand-off persists.

It is cited as the most influential academic book in history; and it is clear that the challenge for theology is to accommodate its findings within a religious context – something the Lord Bishop of Oxford was plainly unable or unwilling to countenance.

Leave that aside, except to note that the issue is one of grave importance – pun intended. A news item for July 11th 2018, published in Metro (see attached, below) reports that a single handwritten page of the original manuscript has been sold by Sotheby’s for £490,000.

The manuscript, to be sure, contains the thoughts of the great scientist Charles Darwin. It contains his thought in the form of the language in which he has written it.

That thought is contained in every copy of the printed version of the book as it eventually appeared under Darwin’s authorisation. The manuscript is of historical interest, but it is no more the book, than is the hand-penned score for Verdi’s Requiem that piece of music.

Our historical interest might prompt us to place the manuscript in a scientific museum; but if the manuscript were to burn in a fire at the museum, On the Origin of the Species would remain unharmed  – just so long as one copy of the book remained to be read and reproduced.

How many words follow this question, written onscreen in red?:

There seems to be two independent and legitimate answers. One word: dog; or, two words: dog and dog. This is easily resolved. There is one word type: dog; and there are two tokens of that type: dog and dog.

Now, since the identity of the book is not to be found only in a single token, but rather in the type, its identity lies behind the token accessed through it but residing in the type.

Since the manuscript is merely a token, it has no privileged position as the book rather than any other of its tokens. The book is independent of the manuscript.

It would, therefore, be no act of vandalism, were I to throw out my copy of War and Peace, with its grubby edges, egg yolk and wine stains besmirching its cover, and replace it with a cleaner unthumbed copy bought at my local bookshop.

This is a matter of concern because it throws light on the values we have when we collect or prize the wrong things.

We should not treat as valuable those things that are of mere interest. (Or at least we should recognise that they are valuable only as having historical interest.) What matters about On the Origin of the Species is its truth and insight (or its falsity and obscurantism.) It is as superstitious to value a page from a manuscript as when we venerate a saint’s toenail, deeming it to be a first class relic.

It is a dull fellow who buys a page of Darwin’s great work to stare at it.

What are we supposed to do with it? Gawp in amazement? We can hardly use it for contemplative prayer, since it is part of the work that denies us the enchantment of prayer. Nor should we treat it as a work of art. It is not a work of art.

The complaint raised here is that the kind of values sought has been (had to be) relocated into a world of value that lies beyond either religion or science. For it is art that now attracts our investment in the specific values that lie outside the world of cause and effect. If we are freed from religion, we are still to be freed from the strictures of science and its determination. We should (we must) strive to understand the value of art. 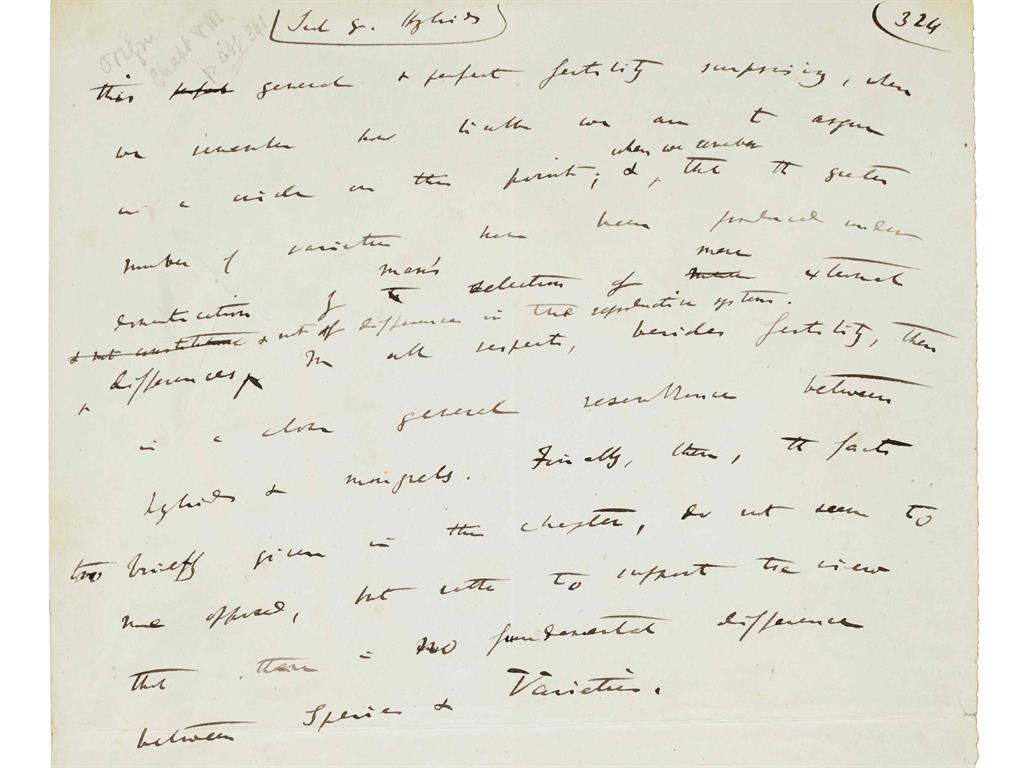 Darwin’s 1859 work — explaining his theory of evolution — was recently voted the most influential academic book ever written. The page contains 104 words, plus corrections, and Darwin concludes ‘there is no fundamental difference between Species & Varieties’.

However, he made extensive stylistic changes before publication which means the printed text differs in detail to the manuscript, which he wrote between July 1858 and April 1859.

The page — the only substantial part of Chapter 8 to survive — was auctioned by Sotheby’s by order of the executors of the late Mrs A P Keynes, a descendent of Darwin’s daughter’s niece. In 2016, a single page from Chapter 7 was sold by Sotheby’s for £175,000.

Next Story:
Painting and Research in the University