The End of Electricity (Domkraft)

Simultaneously doomy and a little dotty, Domkraft freshen the formula with The End of Electricity

[dropcap style=”font-size:100px; color:#992211;”]I[/dropcap]n a sense, music journalism is like any other branch of the trade/profession/whoredom (delete where applicable).

A lot of it is on diary (release dates, label PR pushes etc), there are certain conventions and rules (often unwritten) which are followed, and you really need to keep up with what the other hacks in your area are doing in order to stay relevant. For me, this means keeping an eye on www.DoomCharts.com and its monthly list of the top 25 doom metal albums doing the rounds at that point.

Nothing reveals the essentially subjective nature of music journalism than this. Because once a month, I go through that list and my responses can be summed up like so:

Fuck off… Iommi should sue… Jus Oborn should sue… Oh pissing hell, yet another generic stoner band… Fucking hell, so much for drugs equalling creativity… Oh look, this band’s lead singer is a woman! With women’s bits and everything! Zzzzzzz… Fuck off… Fuck off… Dopethrone were rude to me once, so they can piss right off… Oh lordy, I’m dying inside… That’s shit… So’s that….

You get the idea. If it is any consolation, the writers who boost these albums probably think I have no taste either. But where we agree… that’s when you know it’s a good one, like in the case of bona fide gems like Wo Fat’s Midnight Cometh or Khemmis’ Hunted, or the eponymous debut by Eerie, to name but some of 2016’s highlights.

Another of these just so happens to be the first LP from Swedish doomsters Domkraft, The End of Electricity. This seven track album has its failings, but for the most part its strengths far outweigh them. Part of this is due to the band’s current focus on strong yet repetitive core hooks and chords that loom large throughout the record. On the one hand, this minimalism nails the songs down straight away, but there are points where the formula threatens to become stale. For the most part, Domkraft avoids this; it’s just that the band’s sound, while already strong and distinctive, isn’t as varied as it could be. 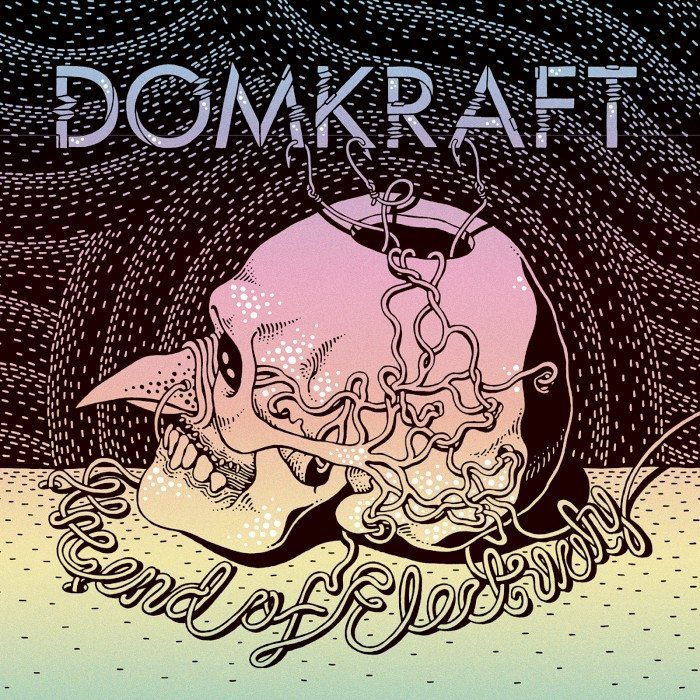 One of the album’s other idiosyncracies is the length of its tracks. Whereas it’s standard practice for many bands to stick their shorter tracks up front and then plant the longer material on ‘Side B’, Domkraft does it the other way around.

For example, opening track “The Rift” is over 10 minutes long, and follow up “Meltdown of the Orb” is almost as long, the length suddenly plummets to an average of between 5-6 minutes long. Not an offputting experience, but certainly a surprising one. It is these shorter tracks where things get interesting. The shortest of them all, at just under three minutes, is “Drones”, a rather eerie, haunting instrumental with accoustic and desert rock undertones, demonstrating a willingness to experiment, if not too much elsewhere on the album.

Ironically, the standout of the album, “Dustrider”, is also the most traditional doom track on it. With its throbbing Sabbath-esque riffs and almost traditional vibe, it succceeds but only in a way that can be best described as small-c conservative.

Perhaps then the mostly hit, occasionally miss feel of the rest of the album makes more sense. Better to try something new and make mistakes than just reheat the usual doom cliches. Perhaps that’s the price you pay for a living genre – dotty, wonderful little albums like The End of Electricity, with all their flaws, rather than what are in effect glorified tribute bands, bonged out and reminding us all, painfully, that it’s all a bit Blue Cheer if you listen hard enough.

This, then, is a good debut, but also a work in progress.