[dropcap style=”font-size:100px; color:#992211;”]S[/dropcap]tudies in Finland suggest that the eating of a ‘delicious meal’ triggers the release of endorphins.

In their study, a pizza was used in the role of ‘delicious food’. Alas, the more traditional Finnish delicacies of reindeer liver or boiled carp don’t appear to have featured.

The recent results obtained by researchers from Turku PET Centre have revealed that eating leads to widespread opioid release in the brain, likely signalling feelings of satiety and pleasure.

Eating a delicious pizza led to significant increase of pleasant feelings, whereas consumption of calorie-matched nutritional drink did not. However, both types of meals induced significant release of endogenous opioids in the brain. 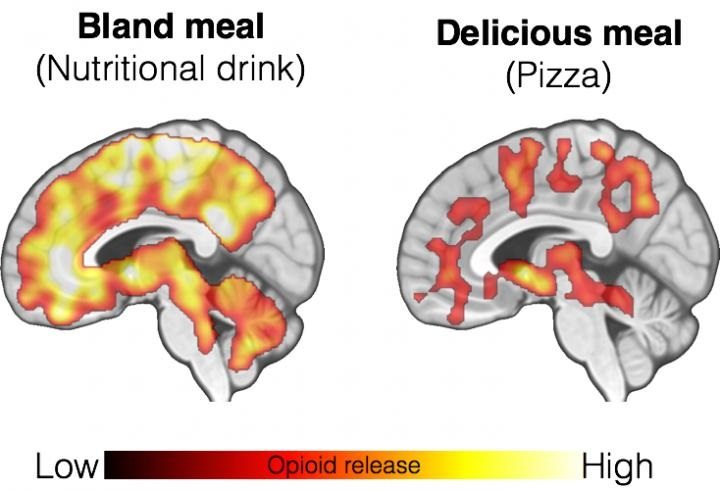 Opioids are associated with pleasure and euphoria. The study revealed that a significant amount of endorphins is released in the entire brain after eating the pizza and, surprisingly, even more are released after the consumption of the tasteless nutritional drink. The magnitude of the opioid release was independent of the pleasure associated with eating. According to the researchers, it is likely that the endogenous opioid system regulates both feelings of pleasure and satiety.

-The opioid system regulates eating and appetite, and we have previously found that its dysfunctions are a hallmark of morbid obesity. The present results suggest that overeating may continuously overstimulate the opioid system, thus directly contributing to development of obesity. These findings open new opportunities for treating overeating and the development of obesity, says Professor Lauri Nummenmaa from Turku PET Centre.

– It was a surprise that endorphins are released in the entire brain and that the nutritional drink had a larger impact. This creates a basis for future research and hopefully we will find ways to study and describe the development and predictors of addiction, obesity and eating disorders, says Researcher, M.D., PhD. Jetro Tuulari.

The study was conducted using positron emission tomography (PET). The participants were injected with a radioactive compound binding to their brain’s opioid receptors. Radioactivity in the brain was measured three times with the PET camera: after a palatable meal (pizza), after a non-palatable meal (liquid meal) and after an overnight fast.