The Courtauld seem to have found a niche in 2013: the adolescent artist.

In the first quarter of the year they brought us Becoming Picasso – a study of Picasso aged 20, and now in the final quarter they are drawing our attention to the early work of the Northern Renaissance painter and printmaker, Albrecht Dürer.

It’s a generally positive curatorial formula. By focusing on the unsung works of an artist’s early career, the net of research is widened. Moreover, it can enable an exhibition to avoid the clichés used in the rhetoric surrounding an artist, (commonplace readings that are established by making generalisations about an artist in his or her maturity).

of The Courtauld collection

is suggestive of his relative

inexperience as a young man

Then again, it can also be relatively risky. There is a danger a gallery could exhibit an underdeveloped specimen, and in the process undermine the talent of the artist and itself, (because it’s probable that the results will appear naff in contrast to the exhibitions of the established artist the public know and love.) How then, did The Courtauld do?

Well, they chose their artist well. It’s my opinion that Dürer has been great from the word go. (Great is not to be read as faultless, but understood to mean that his work is worthy of an exhibition more-or-less from the point he starting making it.) Moreover, I think that the underlying questions that arise when looking to the adolescent artist are exhibition-worthy. Questions such as: how do we understand genius? At what point does an artist gather the traits of a genius? Is it instinctive, inherited, or learned, and just how has Dürer managed to be “great from the word go”? 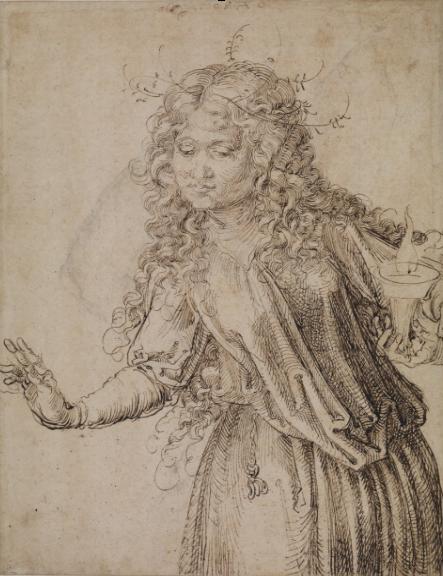 There are definitely moments when it’s possible to tell you’re looking at a young Dürer. If the correct depiction of the human form is the means by which Dürer became a great artist, then the misplaced and disproportioned breast of The Courtauld collection drawing, A Wise Virgin, is suggestive of his relative inexperience as a young man on the whole.

mistakes are on the

between and remain charming

as we watch the artist come

to a position of comfort

with the human form

An accidental but apt alignment in the text in the assigned caption invites this double entendre. It reads, “the incorrect placement of the woman’s breast point to his inexperience… in the depiction of anatomy.”

Then there’s Youth Kneeling Before the Executioner of 1493 also, where – as an adolescent does – Dürer is becoming accustomed with his own body, choosing it as a model for the youth that consumes the foreground. However, the artist doesn’t yet have the confidence with contours of the flesh, overcompensating to the extent that the facial features appear cartoony to the modern eye: the skin is bobbly, the nose bulbous and the eyelids cling to the eyeballs as though ball shaped themselves.

These mistakes are on the whole fairly few and far between and remain charming as we watch the artist come to a position of comfort with the human form and with print media. He does in most cases appear as the self-assured artist historians have given reports of.

Three of the works exhibited are particularly stunning and give us no reason to doubt the artist in his adolescence. The first greets us early on the left hand wall of the first room. It’s a densely detailed depiction of the Holy Family, with a curious detail – a dragonfly – drawn into the far right hand corner.

The print is well designed and executed, proving that the artist has exercised control and has a good artistic foresight. Up top, in the echelons of heaven, God the Father is encased in clouds that roll like waves, and – again with a certainty of line – light streams like lightning bolts from below Him, in a technique we’ll see Bernini reach to in his sculptures centuries later. Behind the Holy Family who occupy the main foreground, is a varied landscape that is identifiably German. Dürer doesn’t neglect a single element, putting in place a cabin for safe-housing the family, a large pool of water, mountains and the turreted tops of a distant village. 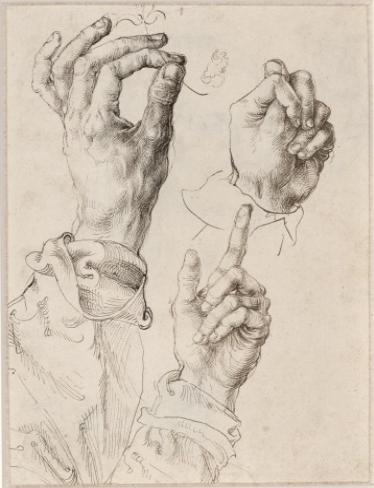 In two examples, The Holy Family of 1491-2 and Three Studies of Artist’s Left Hand c. 1493-4, Dürer has overcome the inconsistencies of the two works I first mentioned. The subtlty in which the artist treats Joseph’s face in the The Holy Family rectifies the bubble wrap effect of Youth Kneeling Before the Executioner. His furrowed brow, receding hairline, and deep-set cheek are perfectly modelled with a gentle touch in pen and brown ink.

Then there’s the hand studies, which illustrate how Dürer got to grips with the human form, grabbing hold of nature by its roots, and confirming what The Courtauld have said, that it is through drawing the figure, that the Young Dürer became the highly celebrated Dürer. Contributions from the British Museum, and various galleries in Dürer’s homeland, make for a delightful exhibition.

The Young Dürer: Drawing the Figure can be seen from 17 October 2013 to 12 January 2014 at the Courtauld Gallery, The Strand.

About Rachel Guthrie 4 Articles
Rachel Eliza Guthrie is a freelance arts writer whose main interest is in the contemporary art scene in London. She writes with the premise that all "people have an inbuilt sense of art, especially the ones who haven't had it taken out of them," which was first said by Quinlan Terry. Her educational backbone is founded in Art History but she has dabbled practically in art as a painter and curator. She's a keen photographer and has a soft spot for Italy and its art, having lived in Venice for a short period. http://rachelelizaguthrie.wordpress.com/
Website