Doro Pesch, Queen of Metal, returns with her new album Raise Your Fist after a three-year break.  Trebuchet’s Meltem Yumulgan talks to her:

Almost 30 years into your music career, what does it feel like to release a new album?

Doro Pesch: It’s actually number seventeen! With each record I’ve always given my all to make the best of the best, to make the fans happy, to give them something they can enjoy and find meaningful. 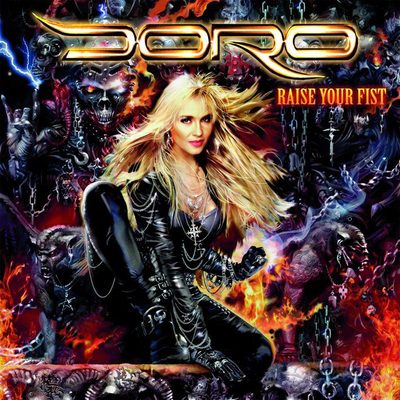 Something they can  believe and listen to for a long time. For example, anthems and old school metal songs that they have always listened to and felt overwhelmed by. So I wanted to write songs which carry the same spirit but with more fresh sound, and make them happy again. Also, there are a lot of soulful songs and we have some great guests on the record, and I think the fans will love them. I always like offering unexpected things.

The album is called Raise Your Fist. Can you tell us what we are raising our fists for?

Doro Pesch: In the lyrics of the title track, the first verse starts “Life can be so unfair…” I think [in] the last ten years we have had life very hard worldwide. So, raise your fist here is to fight the good fight, not to get upset by the circumstances and to make things better.

It is more about the heart and soul. It is a bit like All We Are, to get together and raise your fist against the unfair things happening in the world. I wanted to write a song that is empowering and gives energy to do what you feel is right. I think it is a very connecting anthem.

You’re known for your duets with other musicians. How do you get that organized? Do you choose those people or does the request come from them?

Doro Pesch: Both ways. Sometimes when I am on tour, some bands asks if I can sing on their next record and I say yes. And sometimes when I write a new song, I feel like it could be great to sing it with someone I already know. For example, on the last record, I had a song which was sweet and soft and I thought I needed an angelic voice. And I thought Tarja Turunen would be the best person for it!

At the same  time, she was planning to contact me to sing on a version of one of her songs. So, we exchanged songs.  There is a song with Lemmy as well. I know he is very busy and all that but when I was writing the song, I knew he has a great soulful voice and he would be perfect for it and I sent him the song. I also did a song with the band Tankard a while ago. It is totally different style for me but it doesn’t matter.

Even if it is the smallest or biggest band, as long as it feels good, it’s fun or if  something the fans would enjoy, I always do it. Sometimes when you don’t know the person, it builds some kind of nice friendship coming from the collaboration.

You have an important place in Heavy Metal music as a woman. How do you cope with the dominant male presence in the Rock ‘n’ Roll world?

Doro Pesch: Actually, I can say I have never been degraded or considered the second sex as a woman. I was always supported and respected because I had the chance to work with the best people. And good people, they know better! No matter what they do, the music always shines through. My first tour was with Judas Priest in 1986 and they were very supportive.

My second tour was with Ronnie James Dio (R.I.P.) in 1987 and he was the sweetest person on earth. I remember my first tour with Judas Priest. We finished the tour in Scandinavia and I was walking on the ice to go and check every sound-check because I was such a big fan. The people on tour said to me “Don’t walk on the ice, you will get sick!” I said, “It’s ok, I am strong as steel, I am heavy metal!” (laughs)

The next day, back to the UK, we started a tour with W.A.S.P. The next day I was so sick in fever, I felt like dying. We were playing in a club and there weren’t enough dressing rooms. I was sitting on the staircase in fever and suddenly Blackie Lawless came up. He asked me if I was the singer of their support band. I said yes, and he actually carried me inside and took me to the dressing room. He asked all the other members of W.A.S.P. to go and wait outside.

Then, he brought me all these magic stuff for the voice and fresh fruit juice (which was not very common to find in the 80s!). He let me get some rest and sleep and woke me up before the show time. He was so nice to me.

And how do you feel about the way women are reflected in Rock/Metal songs?

Doro Pesch: In the 80s, I remember, it was much more sexist. Every director was putting naked sexy girls dancing and not looking very smart. I think now there are so many great women out there that nobody would think that women are only sexual objects anymore. I think it has got much better. I mean, there are still not enough women! But good people, they always think differently. I mean people like Dio, the guys from W.A.S.P or Judas Priest, they would never think that way!…

… only with some commercial concerns maybe?

Doro Pesch: Yeah, I mean let’s face it; every ugly band that didn’t have a cool image looked ten thousand times better with some beautiful girls dancing around them. But I think it has got much better now. For example, Crucified Barbara, they opened for us in Russia and everyone thought they kicked ass. 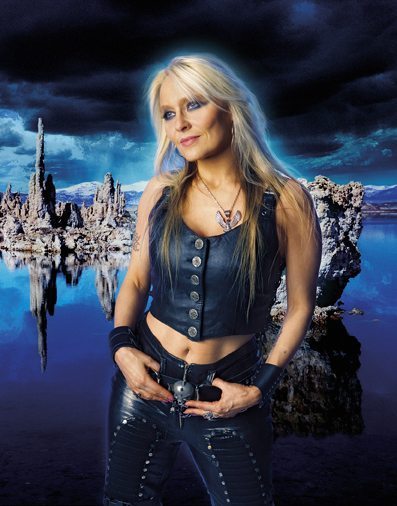 How do you combine your female sensitivity with the heavy sound?

Doro Pesch: I like it when things come out of your subconscious; it is a kind of magical experience. For example, I wanted to write a song for Dio to thank him, which is on the album. I was actually falling asleep when the lyrics and the melody came out. It all came out immediately. If you have a vision for a song, you just do it. When something just flows, that’s the best, when you don’t think about it and let it happen.

It is hard to explain. The song takes it away wherever it wants to go. I love sensitive lyrics but also heaviness and power. I love both the most sensitive lyrics and the fastest metal songs. When you are writing something you can’t feel if it is going the right way. When the song takes on something that is not right, you feel it immediately like a dark cloud. I just feel it and I don’t have to fake anything, it just comes out from the heart and honestly. For example, I don’t like singing too many harmonies or when they add too many major chords.

So, you’re more interested in the emotional intensity rather than the technical side?

Doro Pesch: Yeah, I am definitely not a technical person whatsoever – not in any aspects in my life. I am a total mess when everybody else is nice and tidy. I am not an organized person.

The Rock/Metal industry can be tough. How do you remain ‘metal’ with a smiling face?

Doro Pesch: Music is definitely not a business for me. I don’t have a house, I just rent out two little apartments in Dusseldorf and New York. All the money I save from the tour, I always put it back into the shows and to the next record. I don’t need much for myself, I make music to make people happy.

I always get my inspiration from the fans, and I am also the happiest person when I see them. I try to give something to them that will make them forget about everyday problems or other bullshit, even if just for two hours when they listen to the concert. I say ‘let me do the work and I would like to make you all feel good’.

Even with headbanging, there is a lot of stress relief and it makes you forget about what you have to do the next day. I feel honored even if I can make them feel like they live in a better world for those two hours, or like they have something nice to remember. I always try to keep in touch with my fans and some people say my record helped them to get over something like a divorce, or somebody dying, or other bad things. They say my songs gave them so much energy and power to get over it.

I didn’t know that in the 80s, but now I can see it and I want to work a little bit more to make people happy. It doesn’t matter if it is at Wacken or a small club, I always give them my best. Even when only one person says I helped save the day or made them enjoy themselves after a hard day at work, it makes me feel great!