This is like rolling a natural 20 in a particularly bleak game of D&D. You’ve lucked out, and the Gods do smile upon thee, which is certainly a step up from most weeks when it’s more like an unrelenting blast of shit and flatus projected out from the dilated arsehole of Jonathan “I’m 44 But I’ve Still Got Dredlocks” Davis. 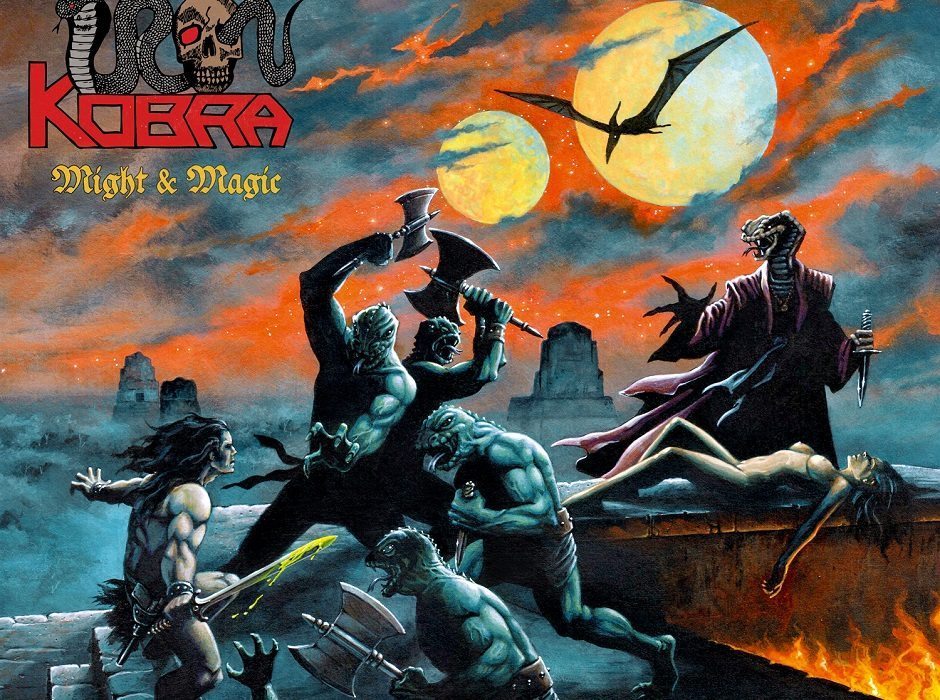 (what with all the drugs and physical violence, not to mention squalid detours into garden furniture wholesale)

…is when you get a batch of albums and they all turn out to be good.

This is like rolling a natural 20 in a particularly bleak game of D&D. You’ve lucked out, and the Gods do smile upon thee, which is certainly a step up from most weeks when it’s more like an unrelenting blast of shit and flatus projected out from the dilated arsehole of Jonathan “I’m 44 But I’ve Still Got Dredlocks” Davis.

Leading this week’s glorious charge is German trad metal crew Iron Kobra and their new album, Might & Magic. As the band name, nation of origin, album title and, indeed, the gratuitously cheesy fantasy art on the cover show, this is a band that ferments old school metal in glass bottles and then writhes in ecstasy as their roadies pour all that distillated bullet belt and sleeveless denim jacketed goo over them in the bath. Which is to say, they really do like their classic metal.

The end result is catchy and direct, and while there is a hint of nostalgically flavoured irony in the mix, it’s mainly a labour of honest, unadulterated love. It’s fun a

nd honest in its affection, the only issue really being whether it’s so close to that classic sound that it kind of makes itself redundant at points.

My heart sank when I checked out the PR blurb for Fatherland, the latest release by Ukranian folk metallers, Paganland. You may well already have alarm bells ringing at this point. Oh, did I mention they’re stridently nationalistic and anti-Russian? And that their band photo has all of them strutting across a field in matching black shirts with red fucking swastikas/sunwheels embroided on them???

Still, Latvia’s mighty Skyforger have been waving about the local spin on the sun symbol for years, and they’re neither racists nor fascists. You’d hate Putin too, if he lived next door to you. I’ll let you make up your own minds.

Perhaps it’s dunderheaded at this point to ask whether the music itself is any good. Still, it is. The orchestrally overblown keyboards are straight out of the late 90s and early noughties, guaranteeing some serious nostalgia for old gits. The songwriting is solid and demonstrates some excellent hooks as well as a crushing crescendo or three. The only real complaint is that the production is flat and blunts the full sweep of the songs somewhat.

And what better way to follow on from that controversy than with a bit of epic doom? Sweden’s Sorceror have been in existence off and on since 1988, and yet In the Shadow of the Inverted Cross is only their first full-length album. Needless to say, it’s good old fashioned epic doom of the kind that abounded in the wake of some obscure band or other called, err, Candlemass, so you’re probably already able to guess what it sounds like.

In practice, it’s a booming, bombastic beast of a record with moments that neatly help it to stand out from the bulk of the genre. Songs like “Sumerian Script” and “Exorcise the Demon” as well as the title track are certainly standouts – the only minor niggle is that the album just slightly starts to lag towards the end.

Finally, there is Hurt Yourself and the Ones You Love, the latest disc by goth’d out Italian black metallers, and Trebuchet favourites, Forgotten Tomb. Let us not dwell on the cover art, which isn’t so much ‘Smell the Glove’ as ‘Taste the Bullet’, and instead savour the loveliness within. It is blessed with that self-same wonderfully polished, yet marvellously dirty sound and oozes despair, evil and a toss-up between murder or suicide. Or perhaps murder-suicide, or even suicide-murder? We swing in all directions around here, baby.

The songs have a wonderfully dank mix of drone, melodic melody and shrieking harshness while each being able to stand out well on their own merits. You’ll never look down your nose at goth metal again – as long as it sounds this good, of course.

And once again the band plays around with the listener’s preconceptions – are these songs about abyssal, beyond-the-gates evil or the day-to-day emotional horror we visit upon ourselves and others? Is it both? Perhaps, as Forgotten Tomb suggests, it’s easy to see a devil in every shadow but hard to see the one looking back at you in the mirror.

Next Story:
Fallow and Flower, For Feeding the Bees