David Lynch is a deft practitioner of ‘Vagueness of form’, as so evidently witnessed in Eraserhead, Lost Highway, Firewalk With Me, and, in fact – all his films. Crazy Clown Time uses a mixture of bare bones instrumentation, very subtle atmospheric textures and, in certain cases, a narrative to guide the listener into their own inner cinematic world. 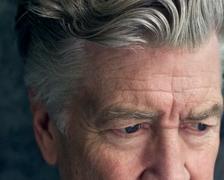 [dropcap style=”font-size:100px; color:#992211;”]I[/dropcap]t is a fact that some of the best films of the ‘Dark’ variety masterfully utilize the tool of being ‘Artfully vague’; leaving the imagination to fill in the gaps (as example, the formula of The Blair Witch Project – ripped to eternity by so many others since).

David Lynch is a deft practitioner of ‘Vagueness of form’, as so evidently witnessed in Eraserhead, Lost Highway, Firewalk With Me, and, in fact – all his films. Crazy Clown Time uses a mixture of bare bones instrumentation, very subtle atmospheric textures and, in certain cases, a narrative to guide the listener into their own inner cinematic world.

Clearly Mr Lynch is as adept at producing albums as he is at making films. The audio medium being just another useful mode in capturing his ideas, and his peculiar character is indelibly stamped everywhere upon this work of art (apart from ‘Good day today’).

Opening track, and subject of multiple remixes on the re-edition, ‘Pinky’s dream’ begins with heavy and doom-laden tom-tom drums that maintain their course throughout the track, and subtle strumming echoes. It reverberates through a Swamp highway dreamscape overlaid by the dark velvetine vocals of Karen O. She comes across as the perfect Lynchian Chaunteuse, with whooping throttled screams as she begs the character ‘Pinky’ to ‘please watch the road’.

It is almost impossible to not create a mini-film to each of these tracks. One that is composed of a personal visual Frankenstein’s monster: butchering favourite scenes and pieces of Lost Highway, Twin Peaks and whatever else may grab your fancy. The suggestion is implicit, which Lynch is alost certainly aware of.

The second track on the ‘Actual’ album ‘Good day today’ though, seems completely out of context with the rest of the album and somehow just ‘wrong’. The track heavily disguises Lynch’s vocals, using a Vocoder treatment that appears in various parts of the album in a much better context. Lynch did recently state that he was so embarrassed to sing that he could only do it in front of the studio technician he works with .

Crazy Clown Time is not a new record, and has been reviewed elsewhere, but the raison d’etre (other than to strangle some more cash from completists) of the reissue is the remix disc. Although it may be a good marketing ploy to issue a ‘Deluxe Remix’ package, featuring alongside the true album the works of artists such as Moby, Underworld, Visionquest etc – and although they offer interesting alternative versions of Lynch’s pieces, the fascination of this particular album that it is an expression of the explorations of a very singular artist.

Thus the remixes come across as more a ‘pollution’ than an embellishment.

The Underworld remix of ‘Good day today’ has nothing to do with the ethos of Lynch’s work whatsoever. As for the Moby remix, it just sounds like Moby trying to be dark and simply doesn’t work . Some of the other mixes: Sasha and Trentemoller, capture the essential textures, atmospheres and darkness of Lynch’s work and pay an appropriate level of homage while also bringing something new to the tracks, but apart from those, the rest are superfluous padding on an already damn fine record .

This interesting remix makes good use of various parts of Lynch’s Audio from the original track ,including Karen O’s wonderful Vocal and actually does a pretty good job of recreating it in a way that pays a kindly homage to the ‘essence’ of Lynch’s work . On the original, the predominant pace is a ‘New Orleans Death dirge’. This version makes use of that pace for the initial part of the mix until it takes off midway to double tempo without losing its atmosphere. A clever and considered version.

Some melodic synth punctuations almost seem indispensable after a couple of listens. Karen O’s vocal is emphasized in this mix, which includes a few more overdubs and harmonies that work really well. The music is insistent and works well as a classic dance floor track, (with a Primal scream Autobahn 66 approach) while keeping just enough elements from Lynch’s work. More importantly, it stands alone as a piece that many will prefer to the original. The version concludes with some nice mandolin style guitar overlays that drive it to a most satisfactory conclusion.

The next logical step would be for some kind of ‘live’ experience of these works at some point in the future. Hopefully Lynch can get over his ‘embarrassment’ at singing to more than one person soon.

Next Story:
Trickle Up