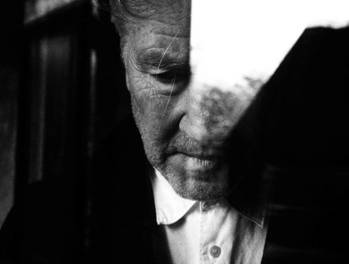 One ear, one hit, some wonder?

Many artists demand that the listener comprehends their issue on its own terms. With Crazy Clown Time David Lynch presents us with an unusual set of terms that defy non-emotional comprehension.

Since Lynch has started to release music there has been as much criticism heaped on his music as on music reviewers. Apparently we aren’t critical enough. We’re either blinded cinema fans or sycophants, have ignored both the obvious failings of Crazy Clown Time as a musical work and David Lynch as a musician. They would prefer a commentary that strongly slammed the release as too dated; too basic; amateurish; elemental, and naïve bordering on culturally autistic. Out of step and just plain wrong. Since we’re discussing expectation it’s about now that the reader should expect me, the reviewer, to espouse exactly the same qualities as why this album is a work of genius.

Oh, callow reader, this is not the order of the day. This album is good, catchy, but not an immediate masterpiece. There are moments when the experiment elevates the exercise, where the intention and the ability meet in the execution, and happily after listening a few times, 50% of the album hits the mark. Which isn’t to say the other half misses at all. This album and its more peculiar corners, require time and contemplation and while neither is usually given by the commercial listener, we are given enough hook in the two singles; ‘I Know’ and ‘Good Day Today’ to be rewarded the price of admission.

In loose terms the album contains variations on trip-hop, gothic blues and EBM, with Lynch intoning in a number of topical phrases allowing the listener to peer down in to a world that is almost redundant to describe as anything other than Lynchian. I understand that that is both tautologous and particularly lazy so let’s investigate further.

The ‘Lynchian’ quality of scene can be described as being emotionally charged but impotent, many of his lead characters (against which he asks the viewer to align themselves, jarring the audience only rarely) are drawn into circumstances that compel them to continue but are unable to comprehend what is happening to them.

When they finally come to some revelation regarding their situation they are thereby trapped and unable to escape. The very act of knowing seems to traps them as they become complicit in the creation of their mental prison, a sort of feedback loop of fear and/or wonder (Lost Highway, Mulholland Drive). Wherein they learn that the only means of escape is in sacrifice and risk (Twin Peaks).

Lynch narrates his tales, and they are his, over constructed pieces of music that use formal elements sparingly. Melody is much less important than mood and in many cases the meter ticks along as the counterpoint heart to these tales. However, Lynch’s most powerful instrument is space, as a general rule the more space he employs the more emotionally charged his music is, and often relates to a scene whereas the busier the track is, the more the song relates to a single person and the changes within that person’s mindset as the situation changes. Speaking to Billboard Lynch admits that:

“ I’m not sure if these days people really sit down and listen to an album start to finish but if they do, you want to have the correct sequence. So you live with the sequence, you think intellectually and emotionally to get a line, then you test it and live with it for a while. Maybe rearrange a few things and then you’ve got a sequence that feels good should someone sit down and listen to it start to finish.” (Story)

In ‘Good Day Today’ Lynch gets into the album proper.  From the melancholic assumptions of daily life comes the entirely suburban elevations of the chorus; simply “going to have a good day today”. The supra-human wishes of people, the small prayers that, minute and humble, perhaps even condescending, manage to elevate the individual. The cracks of sound breaking the Casio sun the flow, rotate the head, as Lynch sings prophetic over the 50s drones and ratchet beats.

Lynch’s most powerful instrument is space

It’s a good song, hardly technically ground breaking, but manifesting a self-contained story and statement it manages to make itself more immediate than whole conservatory of revisionists. While Lynch may have the chops of your average bedroom dabbler, his experience in trusting his own judgement to hone in on a singular vision, removing the excess and emphasising the pure is unparalleled. As Woody Guthrie was fond of saying; “any fool can make things complicated. It takes a genius to make it simple”

Instrumentally much of the Crazy Clown Time is made up of three elements: sweeping 50s guitar, industrial drums and tonal washes. Whether orchestrated or simply repeated, the music staggers and runs between various phrases imitating stutters and shuffles all the while reverbed into oblivion. Lynch’s own website suggests that the album is a modern reinvention of the blues which, presumably like Lynch movies, awakens the darkness and uncanny valleys that exist within anachronisms. Characters that we’d like to see as stereotypes teased into fuller expression, and savage individualists (serial killers and violent orgiasts) rendered as mannequins posed by more malevolent forces.

With Crazy Clown Time we are given a rare insight into Lynch’s conceptions of measure, space, and tonality played out with characteristic dynamism. It is remarkably consistent with his films, and weird. Well worth a listen.
Crazy Clown time is out now on PIAS / Sunday Best; 2011
Sidebar Image: Mark Berry