Cynical Chinese art makes liberal westerners feel good but what will we make of the new proud Chinese middle class?

[dropcap style=”font-size:100px;color:#992211;”]I[/dropcap]n Part 2 of this article Natalie Andrews explores the taste and buying power of the rising Chinese middle class. (read part 1 here) We in the west are au-fait with modern Chinese art like the work of ‘Cynical Realists’ who reflect back to us our expectations of a stilted and oppressive culture. More recently we have an emotionally charged and internationalist approach with equally as critical Ai Weiwei. In China though this work has limited appeal and a more nationalistic genre is preferred.

The West Imports Chinese Cynicism, it makes us feel good!

“Received critical wisdom has it that the Chinese “cynical realist” painting of Fang Lijun and Yue Minjun reflects the alienation of the New China, with its consumerism and lack of political options. This is part of its selling point. But the bottom line is that its “critical” mystique has a real limit, because it simply had no broad audience in China,” Ben Davis ‘Ai Weiwei’s Path From Cultural Prankster to Enemy of the State’ 2011. 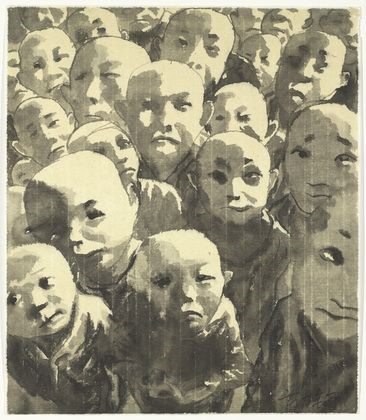 Cynical Realism was a movement from China which poured scorn on the regime by use of irony and pop and propaganda style realist images infused with cynical humour. It began in the 1990s and is a staple of the dissident Chinese art form famous in western auctions.

The audience for this work and its imitators are in the west, the exotic nature and dystopian feel make it an interesting prospect for western art collectors building an anti-authoritarian self-image. In short the work stabilises a view for westerners that they live in a more civilised place while Chinese liberals are damned to a kind of police state. If we are consuming Chinese dissidents for their heroic or pathetic appeal then what are the Chinese consuming?

There is a growing upwardly mobile lower middle class1 in China along with an established wealthy elite who are keen to both be associated with art for its cultural kudos and also because it’s a gamble worth playing in the hope it returns money. The appetite for art includes everything from European masters to independent contemporary practitioners although more and more there is a tendency towards tradition and China’s own past, much like Russian investment2 in art there is a desire to connect to a national identity and this would seem to be a growing trend,

“Art has become a kind of currency, and collecting is so popular in China now that auctions are often mobbed. On Chinese television, more than 20 programs offer tips on collecting and on identifying cultural relics, and late-night infomercials promise quick riches to viewers who purchase a $2,500 collection of works by former students of renowned masters. Purchase today, the ad declares, and you can immediately secure a profit of $100,000. With so much at stake, Chinese art dealers have rushed to Europe and America to buy back Chinese relics,” David Barboza, Graham Bowley and Amanda Cox Ibid.

“Unlike the West, where

“the shock of the new” is admired,

China values tradition, and its

As a result of this appetite there is a huge problem with forgery in China and this has even closed entire museums under the suspicion that all the artefacts were fake 3. There is also a budding market for painted copies and droves of Chinese art students are engaged in learning the procedures to recreate popular works,

“The Chinese are handicapped in cleaning up the art market, though, by a weakness in their laws, which absolve auction houses of any responsibility if a work turns out to be fake,” David Barboza, Graham Bowley and Amanda Cox ‘A Culture of Bidding, Forging an Art Market in China’ New York Times 2013.

More than this Barboza at-al (see part 1), identifies the different status of what is termed ‘the shock of the new’ recalling the important and influential Robert Hughes documentary 4 which charted modernist art movements of the 20th century.

What is meant by this is that for Barboza there is little appetite for what is commonly referred to as the avant-garde. This may or may not be a national characteristic, but it is certainly true that avant-garde activity has garnered a bad reputation with authorities not simply because of Ai Weiwei, but a history stretching back to the 1980s which has certainly limited its exposure to ordinary people. 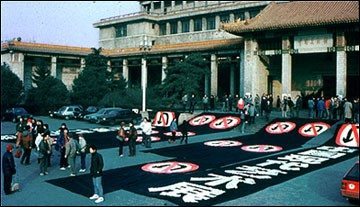 The National Art Gallery, Beijing, on the opening day of the China Avant-garde exhibition. February 5, 1989

“The exhibition was shut down just two hours after it opened, when artist Xiao Lu shot her own work, Dialogue, with a pellet gun. After the Tiananmen Square massacre occurred just four months later, these shots were called “the first shots of Tiananmen” by the media,” Lu, Xiao (2010). Dialogue. Hong Kong: Hong Kong University Press.

The growing feeling of rebellion and dissatisfaction that the show represented was heavily associated with the student protests and as a result the authorities felt they had given the artists and the students to long a leash only for them to use the opportunity to embarrass China. This was a significant event that would influence the next 30yrs of contemporary art in China,

“Unlike the West, where “the shock of the new” is admired, China values tradition, and its best-selling works often pay homage to, and look like, those made hundreds of years earlier… At prestigious art schools, students engage in what the Chinese refer to as “lin mo,” or imitating the masters. Forgery and fraud are not necessarily part of the tradition, experts say, though famous painters like Zhang Daqian, who died 30 years ago, took pleasure in fooling the experts,” David Barboza, Graham Bowley and Amanda Cox Ibid

For the Chinese authorities the concept of critical art is a civil liberty which is not worth having, they of course make that decision on behalf of the people so it’s difficult to know if indeed the Chinese do or don’t have an appetite for avant-gardism.

America has and is, also engaged in this kind of activity and has a kind of global hegemony on soft power supported by; Hollywood, a booming art market, popular music, powerful media companies and the proliferation of English as the global language. This combined with its own relative stability and wealth.

More directly in the 1950s the CIA actively promoted Abstract Expressionism by influencing newspapers, magazines, and public information organisations they also bank rolled exhibitions. ‘Project Long Leash’ 5 as it was known was a way of promoting American freedom and creativity in contrast to the heavily censored Soviet Union.

The artists, left leaning and some ex-communists had no idea and would have balked at the governments interference. ‘Long Leash’ became an artworld myth until it turned out to be real. Controlling pockets of dissent activity was American policy in the 1950s and 60s which is slowly appealing to China today, although China is seemingly more sensitive and does not as yet take much criticism before it ‘squashes’ it.

America in this sense is a better bet for free thinking although both tendencies are more Orwellian than we may like.

1 “This new middle class just emerged in the last 15 to 20 years. Fifteen years ago, people didn’t have cars yet. But in the last seven, eight, or nine years … everyone has a car. Some people have more than one car….A. It is estimated that it’s more than 300 million — already larger than the entire population of the United States.
About 25% of the population is middle class. It’s about 50% of the urban population,” Helen Wang, author of ‘The Chinese Dream: The Rise of the World’s Largest Middle Class and What It Means to You’ interviewed by Tami Luhby, 2012, money.cnn.com

2 This is linked to a growing pride in Russian history and the forging of a new kind of national identity,
“Russian collectors and their art have come in from the cold: a new breed of super-rich collectors is spending record sums to buy back their domestic art heritage, much of it from the foreign owners who snapped it up for a song in the aftermath of the 1917 revolution,” Louise Baring, ‘Russia’s art collectors come in from the cold’ 2007, Telegraph.

3 “A Chinese museum has been ordered to close after thousands of its historical exhibits were found to be fake…Police shut down the Lucheng museum, in the north-eastern province of Liaoning, after finding almost third of the 8,000 items on display were not genuine, the state-run Global Times newspaper reported on Thursday,” Agence France-Presse in Beijing Thursday 22 May 2014 www.theguardian.com

4 Robert Hughes was the presenter and writer of the ‘Shock of The New’ a 1980s art documentary which attempted to explain the motivations and effects of avant-garde art movements it was an extremely popular program and very influential, Hughes remains an important figure and his documentary became a book and further television documentaries followed. This kind of programming along with the earlier ‘Ways of Seeing’ by John Berger are examples of a tradition in Britain to bring as many people as possible on board with the thrust of avant-gardism, the Tate Britain could be another. Episode 1 of ‘The Shock of the New’ can be viewed here, https://www.youtube.com/watch?v=J3ne7Udaetg

5 “The existence of this policy, rumoured and disputed for many years, has now been confirmed for the first time by former CIA officials. Unknown to the artists, the new American art was secretly promoted under a policy known as the long leash” Frances Stonor Saunders, ‘Modern art was CIA ‘weapon’ 1995, Independent.

This is also explored by Alister Sook for the BBC which can be seen here, http://www.bbc.com/culture/story/20161004-was-modern-art-a-weapon-of-the-cia