Crime and the City Solution tour!! 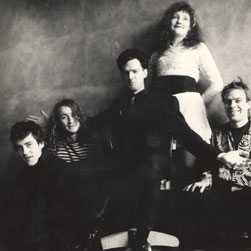 One of key moments in anyone’s life has to be the moment they discover the amazing shimmering walls of noise that is a crime and the city solution album.

or even THAT scene from Wings of Desire

Happily this appears to be changing!

All exits are covered!

“OUR FRIEND WAKES FROM HER SLUMBER, BLINKS IN THE SUNLIGHT AND RUBS HER EYES. CRIME SMILES, ALL MISCHIEF AND WONDER. LET THE EXCITATION BEGIN – CRIME AND THE CITY SOLUTION LIVE AGAIN”

Crime & the City Solution announce details of their first tour in over 20 years, including a show at the Queen Elizabeth Hall on 26 October 2012, full details below.

An Introduction To… will be followed by a new album, American Twilight. Recorded in Detroit, this will be Crime & the City Solution’s first studio album since 1990’s Paradise Discotheque, and is set for release in early 2013.

An Introduction To… is a new series of compilations on Mute, with the tracklisting chosen by the artist. For A History Of Crime – Berlin 1987 – 1991 the band have selected tracks from the three Berlin era albums: Shine (1988), The Bride Ship (1989) and Paradise Discotheque (1990). The album also features the band’s swansong, ‘The Adversary’, from the film Until The End Of The World (Wim Wenders, 1991).

Crime & the City Solution had several incarnations, the first of which was formed by Simon Bonney in Sydney, Australia, in 1977/78. Mk II saw the band based in Melbourne before Simon Bonney was encouraged to move to England in 1984 by Mick Harvey (Birthday Party / The Bad Seeds) who joined the band along with Rowland S Howard, his brother Harry on bass and one time Swell Maps drummer Epic Soundtracks.

In 1987, Bonney and Harvey moved to Berlin, and it’s here that the A History Of Crime – Berlin 1987 – 1991 takes its inspiration. The band at this point comprised of Simon Bonney, Mick Harvey, Einstürzende Neubauten’s Alexander Hacke, Thomas Stern, ex-DAF/Liaisons Dangereuses Chrislo Haas, and Bonney’s co-writer Bronwyn Adams.

The live show will feature new music from American Twilight as well as reinterpretations of songs from the Berlin and London periods. It will also feature, for the first time, a powerful visual component designed by new member Danielle de Picciotto. Using back projection on large screens, the imagery will accompany the live performance as a cinematic embodiment of the Crime musicscape, and will perfectly complement the grand narratives and dynamism that are the hallmark of Crime’s music and live shows.

All Must Be Love

On Every Train (Grain Will Bear Grain)

Home Is Far From Here

I Have The Gun

The Dolphins & The Sharks

The Sun Before The Darkness

Crime and The City Solution

On Every Train (Grain Will Bear Grain)