Squeaky clean or down and dirty? You decide. The Soap Girls bare (almost) all.

Arriving into public consciousness about a year ago (although gigging longer) they’ve attracted controversy amongst the alternative set by performing near naked, emphasising heterogeneous femininity, the radical feminist recolonisation of the sexual body, and glitter.

Drunk and incoherent, a hapless Trebuchet supplicant interviewed The SoapGirls in The Dublin Castle’s Ladies toilets. 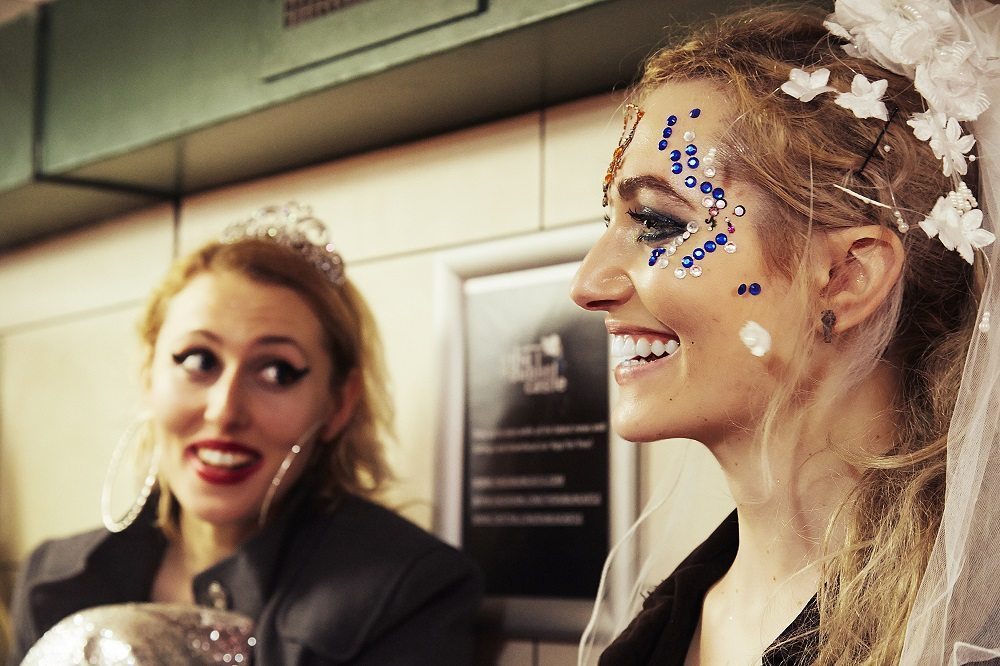 How did the band form? What’s the band’s history?

We’ve always been surrounded by music and musicians so it’s been a way of life for us since 2003, it also helps that we’re sisters with a shared love and passion for music.

Shit, this is a tough one. But we would have to say a show at Percy’s in Whitchurch. Always madness, the best people and besides, they feed us wicked chocolate cake.

What do you want to achieve as a band?

We want to be able to tour the world and have people digging our music and also inspire people to stand up for what they believe and, mostly, give a voice to the most vulnerable.

Why the name The SoapGirls?

As little girls aged eight or nine years old we used to street perform to sell handmade bars of soap in order to raise funds for public hospitals and homeless people. We were given the name by the public, we did it 365 days a year for a period of eight years. 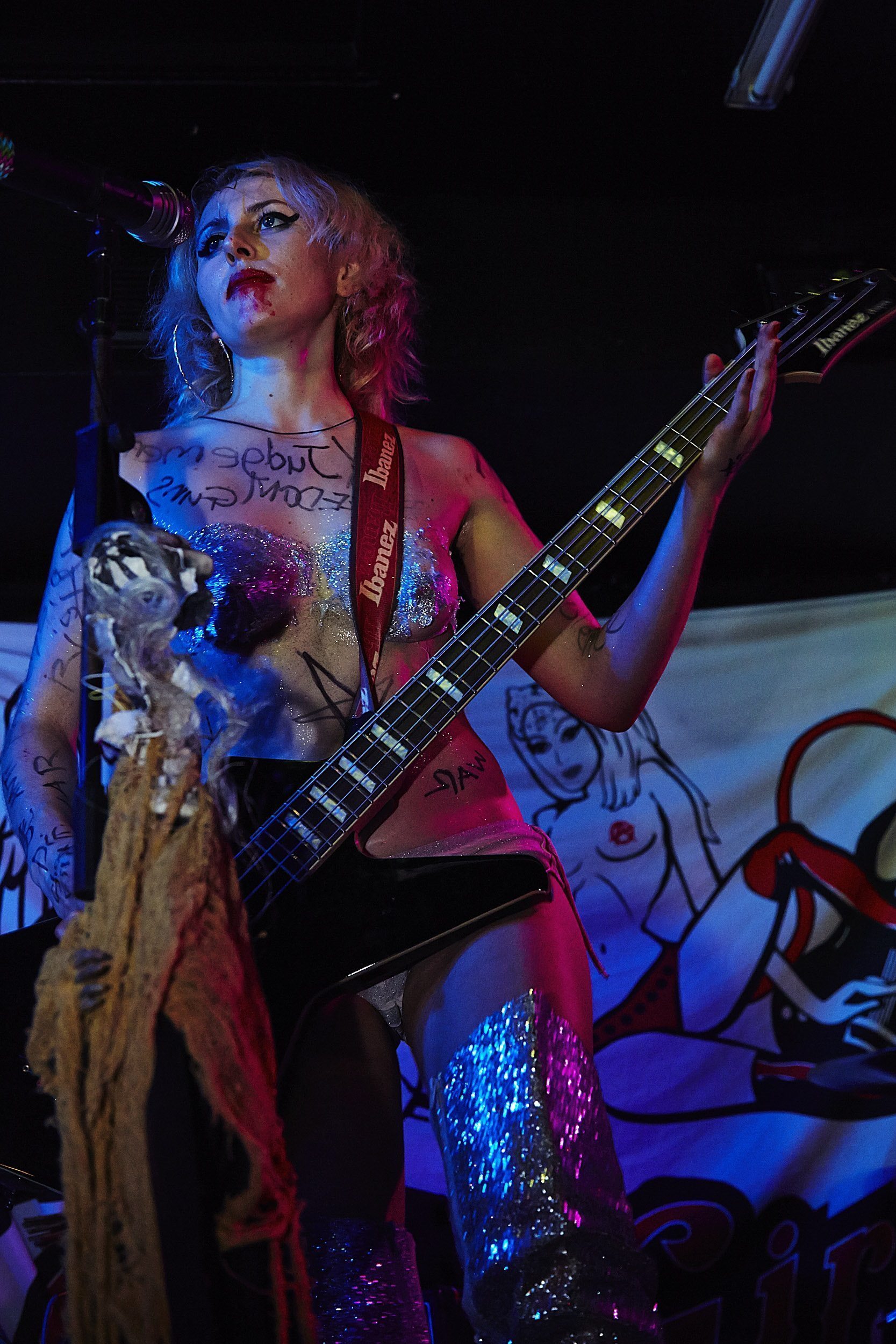 Sluts, Anti-feminist, not-punk. You’ve been the target of some pointed criticism. How do you take it?

Firstly, punk is a way of life not a fashion so conforming to another person’s idea of what punk is, is anti-punk. And since we don’t conform, we are punk, even if only for the way we live. As for anti-feminist, we don’t understand how it’s possible as we are strong empowered females in a very sexist (industry), refusing to be backed into a corner and told how we should behave as females. Lastly, Sluts? Don’t you have to sleep around to be one? Even for people who do, there should be no judgement. That word should be abolished. It’s the equivalent to of calling a person of colour the N word. It should be criminalized!

Are you trying to recapture tiara wearing girlieness in a rebellious way?

No, only one of us wears a tiara. I’ve always loved them and they suit my personality! Code for ‘I’m a brat’.

Most challenging thing being a Soap Girl?

What have you got against cocaine (and champagne)?

Nothing, we aren’t here to judge anyone.

Only one of us!

There is a rumour (possibly aimed at the press) that you are virgins. True or false?  And what do you make of this rumour?

True, we are believers in no sex before marriage and we will point out that this makes us no better and no less than anyone else.

For many acts appearance is important? Is this why you often play topless and appear sexualised in your videos?

The minute a woman picks up a guitar the sexualisation begins. Dressing up or down for a show can and does enhance a performance, but only when a performer is comfortable in their own skin.

I (Mille) am a nudist and often perform topless or body painted, it’s how I feel comfortable and I do it because I want to. As beauty is in the eye of the beholder, so is the ability to sexualize something as natural as a body! I find it so awesome the amount of females who say they feel empowered by the fact that as a woman, I do what I want, no matter how much shit I get for it. I’m saddened however by the fact that female nudity is reserved solely for pornography and strip clubs. It’s acceptable for guys to be topless or even nude (I can name many bands), but should a woman dare to be free on her own terms, suddenly she’s using her body. Why should it be any different to when a man embraces his freedom?

My sister is the opposite and generally wears a lot more than me. That’s how she feels comfortable!

Also I feel I should point out that onstage I’m not male nor female, I’m a performer.

How have most journalists approach the band so far?

With an open mind, curiosity, respect and a great sense of humour.

Given the showiness of your performances is it okay to print that you’re both pretty or does this diminish what you’re about?

Thank you for the compliment. No, not at all. Everyone is free to interpret art and thankfully the outfits don’t play the instruments.

Which came first, the attitude or the music?

If you were to say that the band is reacting against anything what would it be? 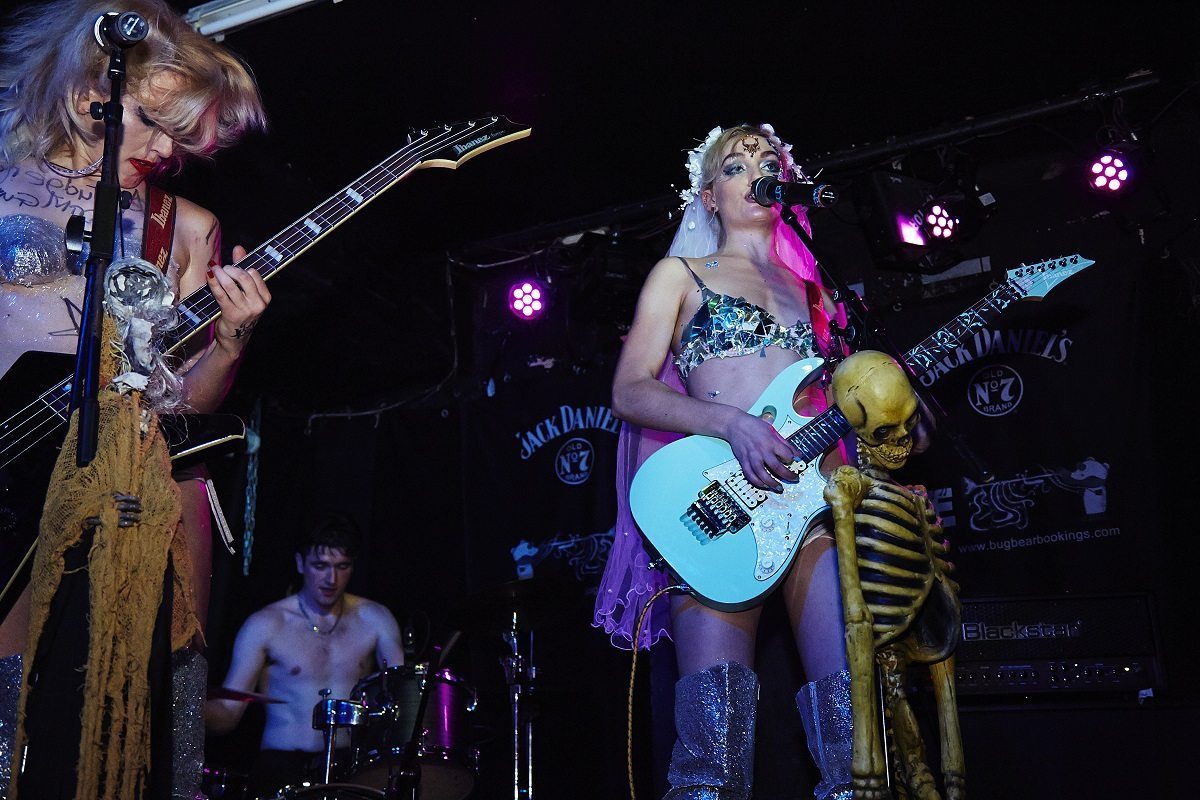 Do you play covers? If not what would be the songs that best fit with what you’re doing with The SoapGirls?

No never! Original music all the way. Can’t think of anything. Bad Bitch? (their latest single).

What would you like people to take away from your shows? A message, a beat or a damn good time?

Definitely the message of not giving a fuck and relishing the freedom of being oneself. We also want people to have the best time of their lives. Our shows are a space for people to let go and embrace their freedom of self expression without judgement.

Outside of the flesh and the feminism, the band can play. High energy Ramones-inspired pop punk, the intensity is there and it sweeps up growing audiences around the UK. If nothing else The SoapGirls are audacious and charismatic. Their music creates a lively event that pushes what crowds are used to seeing. Musically speaking it’s not wholly original but there’s something here that with time and development could become great. The SoapGirls are a great act to catch now, bursting with flavour and attitude they’re on the cusp of wider renown and deeper fandom.

The SoapGirls Played 23rd June 2016 at The Dublin Castle, London
Images: Richard Harvey Not to be reproduced without express permission

Next Story:
We Can Think That For You Wholesale: Do Think Tanks Work?