Teague applies a moral surface to the artwork, as such, she reveals herself as an activist and her paintings become personal tales of her protests 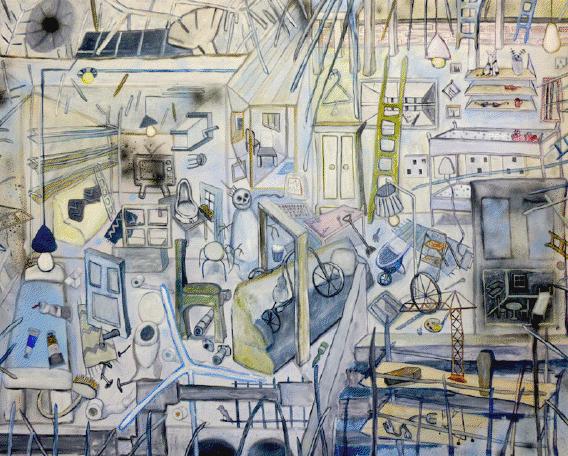 [dropcap style=”font-size:100px; color:#992211;”]C[/dropcap]elina Teague comes at the post-modern world with the ideals of the modernists before her.

Take, for example, authors such as Huxley, whose idea of creating a Brave New World was echoed in the paintings of the modern Europeans – in the Futurists, and British Vorticism. 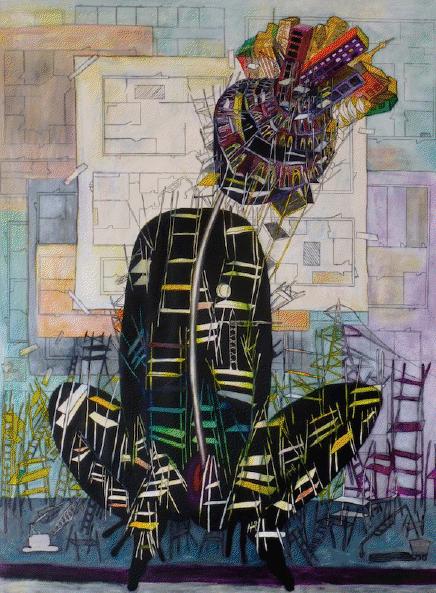 In appearance, some of her paintings seem to collaborate willingly with the fantastical utopias and dreadful dystopias previous artists dreamed and had nightmares about. Brave New World Hits a Glitch (now open at Rook & Raven Gallery, Rathbone Place) is therefore a retrospective of a hundred years of progress in Europe, and a pithy evaluation of its impact on the present. By naming her paintings with references to allegorical and idealist fictions about future worlds, Teague sets up the question: just how far have we moved on since, say, 1932?

Ladders, shelves and other climbable furniture plague her paintings becoming the emblem of progress within these worlds. In ‘Things Fall Apart’ (2012), faintly defined stepladders line the canvas, and are painted over with a wash of pastel shades. The two towers of Babel themselves symbolise man’s desire to progress beyond his own means. Such hubris showed the biblical society’s appetite to accomplish all that the supernatural could. In the painting, one tower stands like Pisa, ready to topple and both have floors, which appear like ribbon unravelling. 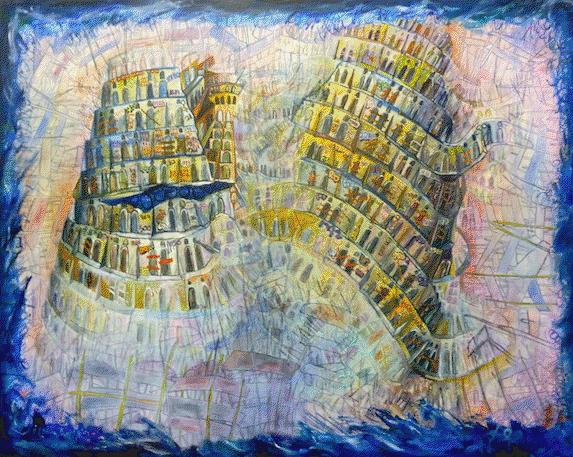 Using religious tales and almost absurd (at least collectively) imagery Teague applies a moral surface to the artwork, as such, she reveals herself as an activist and her paintings become personal tales of her protests. There is a feeling across the exhibition that the artist doesn’t view the constant evolution of progress as entirely positive, even though she searches for progress in some areas (female liberation) and sees some aspects of it as purely playful (the rise of technology).
[quote]Teague applies a

It is interesting to think about whom the artist places responsibility with. Her worlds are generally devoid of people, and in her installation ‘Plates’ – which seems very much in the wake of Judy Chicago’s ‘Dinner Party’ (1974-9) – the chairs at the table are empty. In ‘Mother Death and the TV’ (2012), striding women’s heads are replaced with hawks, in ‘In Search of the Sentient Half’ (2013), mankind is only its legs, and in ‘Til Death Do Us Part’ (2013) there is only a skeleton bug, which lies lifeless on its deathbed.

What is found in mankind’s missing place is their mechanical leftovers – the components of Duchamp’s ‘The Large Glass’ regenerated into the post-modern day. Signposts to the thinking of Duchamp are scattered throughout her paintings, for example bicycle wheels often feature, and a tribute to ‘Fountain’ (1917) is made in the back left room of ‘In Search of Lost Space’ (2013). They give some clue to how these pieces are to be interpreted. [Editor’s note: The title’s echo of Marcel Proust’s A la recherche du temps perdu supports this Parisian/Modern interpretation]

Duchamp was dissatisfied with progress and sought to disrupt it, but through the means of jests. Likewise in Celina Teague’s politically charged paintings, little comic details crop up. In ‘In Search for Lost Space’ a snowman has received the axe through a garden trowel taken to his head. Teague asks: can this new world sustain itself or are our attempts only ridiculous?