Through practice-based research and collaboration with astronomers and geologists, Mark Batty’s work nourishes the relationship between science and art. 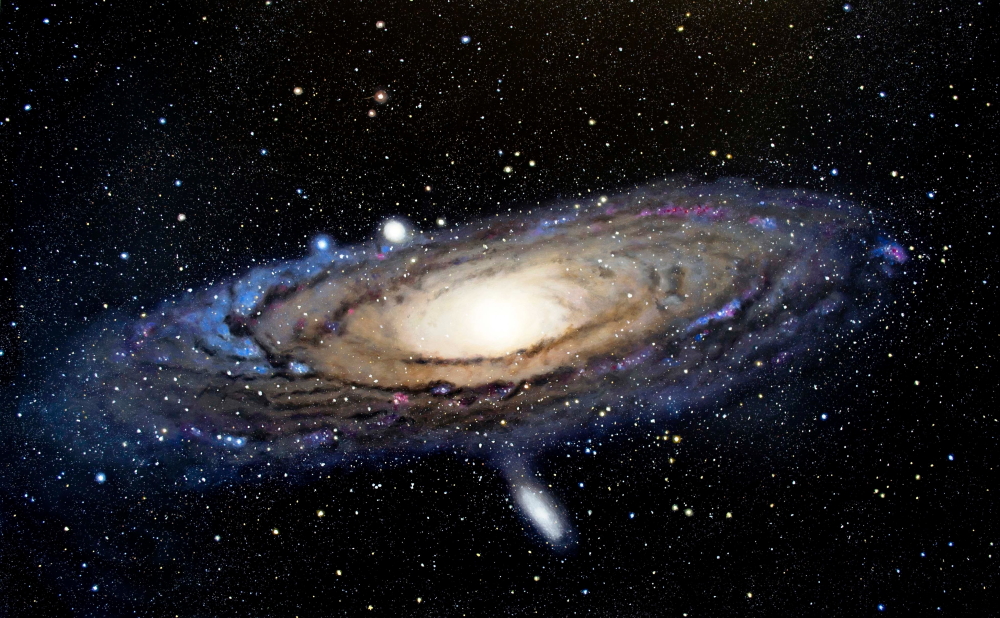 What is space to us now? Concluding his two year residency at Anderson Contemporary Trebuchet featured artist Mark Batty is prepared to widen the question about our relationship to the cosmos.

The cosmos to Batty is a function of light, geology and distance. Scientific concepts that the artist takes great pains to explore in his work. The play between his investigation into science as a way of reducing aspects of subjectivity and as a way of expanding our perception is something he sometimes describes as ‘abstraction’. A puzzling term since he’s presenting a factual and thus figurative view of the cosmos however the point is that without ‘subjective reference’ (something we recognise) the view is cast adrift. In that sense, the viewer is abstracted, the painting is not.

The great fun in Batty’s work is in decoding that abstraction to make it personally relevant. This can be achieved by understanding what you’re looking at and thus where ‘you’ are in cosmic relation to what is he describes. In some viewers this understanding has ecological resonances. In others, the idea of being alone in a vast implacable universe has an emotional void that is subtly comforts them into a serena activity. A journey from cosmic dust, through relationships, triumphs, failures, loves and death, to the light sprinkle of carbon dust flowing in whorls, at scale not dissimilar to the galaxies themselves.

Trippy? No. The scientific nature of his work is glassy eyed, real and reflective. His use of geological material underpins his decided effort to explore the perspective away from humanity one which is self defined and ontologically contained. Readers of Timothy Morton, Levi Bryant and Graham Harman, whose philosophical work on Object Oriented Ontology (OOO) might see how Batty’s work addresses the challenge of OOO to the Copernican revolution which;

“will reduce philosophical investigation to the interrogation of a single relation: the human-world gap. And indeed, in the reduction of philosophy to the interrogation of this single relation or gap, not only will there be excessive focus on how humans relate to the world to the detriment of anything else, but this interrogation will be profoundly asymmetrical. For the world or the object related to through the agency of the human will becomes a mere prop or vehicle for human cognition, language, and intentions without contributing anything of its own.” (Bryant 2010)

Distant visions of space without humanity, celestial bodies as their own. They exist without us and for themselves, with meaning only in their own spheres of influence. A perspective that we can never fully appreciate in a situated sense (being humans after all) however by appreciating aspects of the functional connections that define these bodies we can loose ourselves in threads we’ve gathered through science.

Mark Batty’s first solo exhibition, Celestial Light presents a body of work developed during his two-year studio residency at Anderson Contemporary. This collection of paintings continues Batty’s artistic focus on astronomy by examining the ethereal yet overwhelming nature of space through oil paint.

Through practice-based research and collaboration with astronomers and geologists, Batty’s work nourishes the relationship between science and art. He represents stellar regions, which reconfigure the aesthetic of the landscape through astronomical mapping. These works present a natural aesthetic of the cosmos. However, due to the lack of recognisable structures and tangible forms, the result can seem free of reference and subject matter, blurring the line between representation and abstraction. Batty brings materiality to his astronomic subject matter by grinding his own pigments with geological substances such as dust from lunar meteorites. With traditional handling of oil paint and keen attention to scientific detail, Batty’s paintings invite the viewer to an astronomical frontier by showcasing areas of space that are both overwhelming and within our grasp.

Mark Batty b. 1991 lives and works in London. After graduating in Illustration in 2013 he changed his focus to fine art, specifically painting. After studying astronomy at school and joining a local observers group, he made space his artistic focus. Recent exhibitions include Possible Futures, London (2021), Inner Space alongside works by Oliver Beer, Henry Moore, Lynn Chadwick and Katie Patterson, London (2020), From the Studio Floor, Cambridge (2020), Captive State, London (2019).

Next Story:
Means of Escape: Sarah Morris at White Cube