Soy and tomato combo may be effective in prostate cancer prevention- but not taken as you imagine. 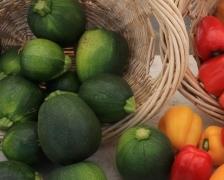 [dropcap style=”font-size:100px; color:#992211;”]S[/dropcap]oy and tomato combo may be effective in preventing prostate cancer – but not taken as you imagine.

“In spite of all you been told about Elvis, the good die old and helpless” – Carter USM

Tomatoes and soy foods may be more effective in preventing prostate cancer when they are eaten together than when either is eaten alone, said a University of Illinois study.

“In our study, we used mice that were genetically engineered to develop an aggressive form of prostate cancer. Even so, half the animals that had consumed tomato and soy had no cancerous lesions in the prostate at study’s end. All the mice in the control group–no soy, no tomato–developed the disease,” said John Erdman, a U of I professor of food science and nutrition.

From the time they were 4 to 18 weeks old, the animals were fed one of four diets: (1) 10 percent whole tomato powder; (2) 2 percent soy germ; (3) tomato powder plus soy germ; and (4) a control group that ate neither tomato nor soy.

The 4- to 18-week time frame modeled an early and lifelong exposure to the bioactive components in these foods, he said.

Prostate cancer is the most frequently diagnosed cancer in men, but the disease has nearly a 100 percent survival rate if it’s caught early. In older men, it is often a slow-growing cancer, and these men often choose watchful waiting over radiation and surgical treatments that have unwelcome side effects, said Krystle Zuniga, co-author of the paper.

It’s just one big knees up

A night on the town,

a storm in a teacup

Where are the songs about

banning the bomb and

who’ll one day be

Soy isoflavone serum and prostate levels in the mice are similar to those found in Asian men who consume one to two servings of soy daily. In countries where soy is eaten regularly, prostate cancer occurs at significantly lower levels, Erdman noted.

How much soy and tomato should a 55-year-old man concerned about prostate health eat in order to receive these benefits?

“The results of the mouse study suggest that three to four servings of tomato products per week and one to two servings of soy foods daily could protect against prostate cancer,” Zuniga said.

According to the scientists, these findings reinforce the recommendation that we should all eat a wide variety of whole fruits and vegetables.

“It’s better to eat a whole tomato than to take a lycopene supplement. It’s better to drink soy milk than to take soy isoflavones. When you eat whole foods, you expose yourself to the entire array of cancer-fighting, bioactive components in these foods,” Erdman said.

The researcher’s whole-food recommendation is bolstered by the way soy germ performed in this study. He noted that soy germ has a very different isoflavone profile than the rest of the soybean.

“Of the isoflavones, genistein gets most of the attention. But soy germ is very high in the other isoflavones, daidzein and glycitein, and low in genistein,” he said.

It was interesting for the scientists to see that the soy product they used, although low in genistein, was still very effective at reducing cancer incidence.

[Editors Note: We all know how good Kale is right? ]

Source: University of Illinois College of Agricultural, Consumer and Environmental Sciences. Eurekalert. “The interactions of dietary tomato powder and soy germ on prostate carcinogenesis in the TRAMP model” has been published online in Cancer Prevention Research and is available at http://cancerpreventionresearch.aacrjournals.org/content/early/2013/04/16/1940-6207.CAPR-12-0443.