A criminal defence solicitor speaks out against legal aid cuts 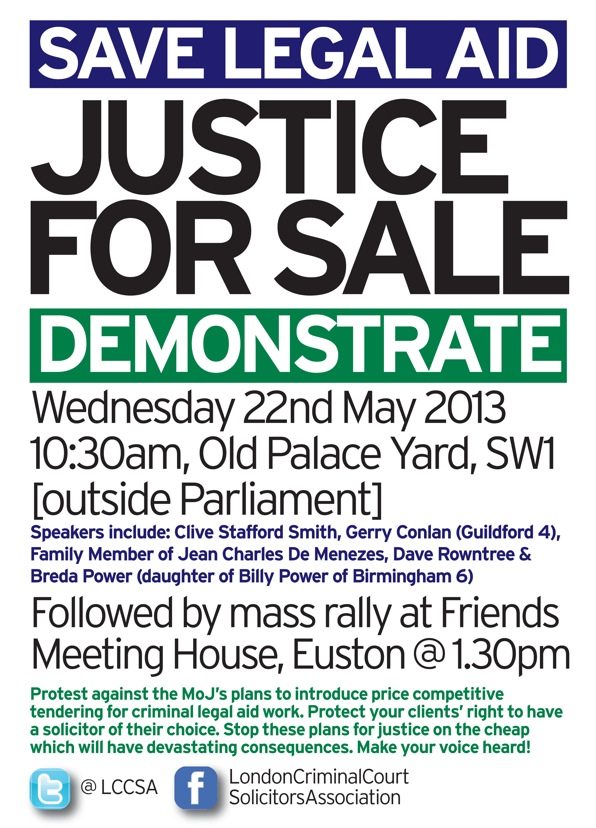 [dropcap style=”font-size:100px; color:#992211;”]E[/dropcap]quality of arms in legal proceedings is surely one of the fundamental tenets of a fair society.

If all citizens are expected to abide by the rule of law they should have equal access to the courts that adjudicate over and enforce them.

In criminal proceedings where an individual’s liberty may at stake, it is of critical importance that they can effectively challenge the prosecution case and defend themselves with the help of a committed solicitor paid for by the state.

The NHS is under attack, as are welfare and benefits. Many tens of thousands have marched against hospital cuts and closures.  The problem with criminal clients is that the government and media can paint them as unworthy and unattractive – which is not the case.

It is clear that legal aid is regarded by ministers as little more than a slush fund for fat cat lawyers and unworthy claimants or defendants. As a consequence, any new announcement is accompanied by disparaging comments about the amount of money earned by barristers from the public purse.

Hence, Justice Secretary Chris Grayling was at it again when he announced a fresh consultation around “Transforming Legal Aid”.   This came just days after the introduction of the Legal Aid Sentencing and Punishment of Offenders Act which slashed £330 million from the legal aid budget.

The stated aim of the new proposals is to save a further £220 million.[quote]The number of firms

that provide legal aid will

shrink by three quarters[/quote] As ever, the consultation was announced with platitudes from Grayling who declared that, “We have an excellent tradition of legal aid and one of the best legal professions in the world.”  This was immediately followed up however we a sombre claim that legal aid is “costing hard working taxpayers too much” and that further savings must be made.

Even more predictably he added, “Some lawyers earn hundreds of thousands of pounds from just one or two cases, and these cases themselves cost up to £15 million each.”  Not surprisingly, Grayling’s spiteful claim was faithfully reported in the Daily Mail.

Legal aid lawyers, unlike many MPs, are not all pigs at the trough of public finance. Salaries for practitioners with many years of experience can be as low as £25,000 per annum.

We do the job because our clients face the might of the police, the courts and the state and we strongly believe they should have the right to have someone who will speak up for them and defend them.

The real issue is not the income of a handful of barristers but rather the effect they will have upon the fairness of legal proceedings.  At the heart of Grayling’s plan is the tendering out of legal aid work to competition.

The number of firms that provide legal aid will shrink by three quarters and crucially, those that remain will be forced to offer their services at a minimum of 17.5% below their present rates.

The inevitable consequence of this will be that established firms with decades of experienced and qualified staff will go to the wall or be forced to abandon legal aid work.

There is a very real likelihood that criminal defence will be provided on a bargain basement level by inexperienced companies with little commitment to representing the most vulnerable and excluded members of society.

In addition, the critical element of trust in client/lawyer relationships is at risk as defendants will be allocated representatives via call centres instead of being able to select the representative of their choice.  Of course, those that are willing and able to pay will continue to enjoy access to the widest range of providers.[quote]We do the job because our

police, the courts and the state

and we strongly believe they

should have the right to have

someone who will speak up

for them and defend them.[/quote]The plain truth is that these proposals reflect the prejudices of our political rulers, in particular their craven commitment to the market and profiteers as the answer to all problems.    They justify their plans by making a spiteful distinction between so called strivers and skivers. Criminal defendants, except for those rich enough to pay, fall very squarely into the latter category and are, consequently unworthy recipients of state aid.

They may, of course, continue to receive representation, but the consultation paper quite explicitly anticipates the provision of services at different “levels” of acceptability.

The indecent haste with which the consultation is being conducted is indicative of the government’s determination to railroad through its proposals.

A couple of weeks ago, 400 advocates in the North West effectively took strike action forcing courts in Liverpool, Manchester and elsewhere to abandon hundreds of hearings.  There has been talk of similar action elsewhere and of firms collectively boycotting the bidding process for new contracts.

This Wednesday, 22nd May, solicitors will demonstrate outside Parliament with speakers to include the Jean Charles de Menezes family, Gerry Conlon of the Guildford 4 and Breda Power (the daughter of Billy Power of the Birmingham 6).

They understand the miscarriages of justice that will follow these cuts.

As Gerry Conlon said, “If Eddie Stobart wants to bid for criminal defence, it’s so they can take them by the lorry load to prison”.

Ordinary people should not be forced to pay with their education, health or legal protections for a crisis that was created by greedy bankers. The legal aid budget of £2 billion before the first wave of cuts was comparable to that of other European countries.  It is a small price to pay for fair and equal access to justice.

Claire Dissington is a criminal defence solicitor working in London

Next Story:
The Wrong Kind of Laughter