Can You Tell Your Toes Apart? Try this Toe Test

Or, which toe am I prodding? Seemingly, most of us have a problem identifying sensory inputs via our toes.

Unless you stand barefoot on a piece of Lego, that is. You’ll feel that.

Most people can’t tell their toes apart without looking. Some healthy people can ‘lose’ a toe if their eyes are closed.

While most of us would assume we’ve got a pretty good idea of where the various parts of our body are, research from Oxford University suggests we may have a problem telling our toes apart – with implications for the way our brains see our bodies.

A paper in the journal Perception reports an experiment in which people were asked to close their eyes. The testers then gently prodded each toe or each finger and asked the people to identify which digit was being stimulated.

Dr Nela Cicmil from Oxford’s Department of Physiology, Anatomy and Genetics said: ‘The results confirmed some earlier research that suggested people could find it harder to distinguish between their toes than their fingers. People could correctly identify the finger being stimulated in 99 per cent of cases. For the big and little toes, that fell to 94 per cent. But for the middle toes, it was 57, 60 and 79 per cent.

‘The key issue was distinguishing between the second and third toes [the toes next to the big toe].’

People’s ability to correctly identify their toes varied. Everyone tested experienced some confusion with no one able to identify the correct toe all the time. When toes were misidentified, a phenomenon known as ‘agnosia’, there was also a clear pattern. The second toe was believed to the third. The third toe was incorrectly identified as the fourth. The issue was even more noticeable when the non-dominant foot was tested (ie the left foot for a right-handed person and vice versa). People were more likely experience agnosia for their non-dominant foot than for their dominant one. 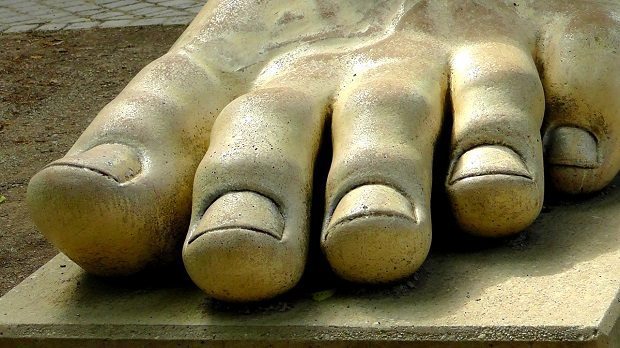 Unexpectedly, just under half of participants also reported a sense that one of their toes was missing.

Nela Cicmil said: ‘We do know of medical conditions that can cause people to lose the sense of one of their digits. The people being tested here were healthy, yet some were reporting the feeling of a missing toe.

‘We have suggested a model in which rather than sensing each toe separately, the brain just sees five blocks. The gaps between the actual toes do not correspond to the boundaries of those blocks.’

The team say that the research has application in checking for brain damage, as errors in identifying toes could be normal. Doctors should expect some errors and need to compare the error rare to that seen in healthy people to check that it is worse than the general population. The results could also help us understand better conditions that result in agnosia or other misperceptions of our own body, such as in anorexia nervosa.