This is Not a Book About Gavin Turk

By expounding upon Turk’s themes, recurrences and symbolic obsessions, a profile develops which is, enchantingly, acres more telling than a full-frontal biographic assault

Turk’s face, depicted in ink line by the book’s illustrator Jim Hollingworth, looms large on the cover, framed by horizontal blocks of orange. A triple meta-joke: the artist’s face portrayed clearly, underneath the title claiming innocence of the subject, sandwiched between the hallmark colours of Penguin’s fiction series. Further examination reveals another punchline – in the bottom right hand corner is the outline of an egg. Simultaneously extending the Penguin publishing gag (the egg is empty of the publishing house’s trademark bird), whilst carrying on the in-joke (Turk, in common with generations of artists, prophets and idiot savants attaches great symbolic significance to the egg. For, to quote Deborah Curtis in the fourth essay of this anthology, it is: ‘A symbol as potent as a light bulb for the expression of an idea’). That it is also predictable and an established, universal part of the human metaphoric lexicon is acknowledged with that tongue-in-cheek knowingness that typifies the discourse on the members of that Lucas/Turk/Emin/Hirst cabal. Indeed, it is Damien Hirst who opens the anthology with an essay ostensibly concerning labyrinths and their enduring mythic import. Ostensibly, because beneath the tedious writers-group attempt at stream of consciousness meaningful, is very little worth relating. A sample passage: ‘Who built the labyrinth? Was it Gavin Turk? I don’t know. Was it my artists assistants? I don’t know. Maybe I’m losing my mind.’

And that’s one of the better bits.

A far more nourishing discourse on the labyrinth follows Hirst’s essay, in the guise of Betsy de Lotbiniere’s examination of Ariadne – and her role in the story of the Minotaur. It was Ariadne who helped Theseus in his task of defeating that Minoan terror, and de Lobitiniere puts together a fine narrative following the recurrences of the myth through twentieth century sources (Joyce’s Ulysses namechecks the ‘old artificer’ Daedalus – creator of the labyrinth, in his semi-autobiographical character Stephen Dedalus) through to contemporary resonances of Ariadne in Christopher Nolan’s film Inception and, obviously, Gavin Turk’s sculpture.

Those aware of Gavin Turk’s oeuvre will at this point, begin to pick up the threads of this book which, as the title suggests, is not about Gavin Turk per se, but instead builds a discourse around the artist through reference to his works, the themes examined thereby, and apparently oblique (until the penny drops) subjects which become more obviously relevant as one delves deeper into the anthology.

And it is crackingly entertaining and educational. True, there are weak moments but not many – Michael Holden’s essay ‘Kurtz’ compresses Joseph Conrad’s Heart of Darkness into a scant few pages, to little merit beyond that of an Oxford Companion to English Literature plot summary. If, as is hinted in the anthology’s introduction, This is Not a Book about Gavin Turk aims to prompt the reader into profound thoughts on the nature of art, then undergraduate-level digested reads of established literary classics are unlikely to nail that particular objective. Artists, if they are to do anything at all for a society, are charged with thinking the thoughts that the rest of us are too downtrodden/unoriginal/televisually-lobotomised to manage. The applicability of Conrad’s tale of colonial excess to modern military policy was well examined by Apocalypse Now, stating the case again reeks of tautology.

Therein lies the ‘problem’ with Gavin Turk himself. The value of ready-made (and already-made) art and artistic concepts recurs as an object of doubt, and demands of the observer a willingness to enter into the coy, smart-alec world of the metatext. Essays in the anthology examine Warhol and Sid Vicious, the potency of Che Guevara as a visual symbol, the role of the fool in the medieval court, the assignation of value to trashed objects recast (in bronze) by Turk in the full recognition that they will thenceforth be valued as artworks, and the danger, via the recurring study of Piero Manzoni (who famously, ‘in the name of art’, poked fun at the very same tendencies by canning his own faeces), of following to the letter the oft-cited media maxim that we must all ‘become our own brand’. 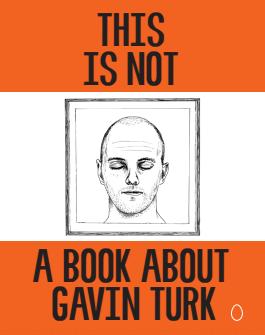 In all, the title of This is Not a Book about Gavin Turk is both true and untrue, building an understanding of the man, his attitude and his work via a negative imaging process wherein, by expounding upon Turk’s themes, recurrences and symbolic obsessions, a profile develops which is, enchantingly, acres more telling than a full-frontal biographic assault. An essay on the origins and history of chewing gum is not directly related to Turk’s fibreglass sculpture of the same subject, but a discreet Hollingworth illustration of the piece signposts the connection.

Elsewhere, essays on the role of social media in modern revolutionary movements, or on the concepts and actualities of intellectual property in the post-Napster world are clunking nadirs of individual narrow-focus tubthumping, but on the whole the anthology informs, interests and entertains on subjects as seemingly diverse as bread, camouflage, punk and revolution, as well as containing a delightfully arch and demanding thesis on the art of being a dandy by Sebastian Horsley.

Being an art book, there are of course idiosyncracies of presentation – the essays are usefully cross-referenced at the bottom of the page with other pieces the editor has deemed to be related, there are quirks of typography including acrostics, upset fonts, ominously (but purposelessly) shaded words and sundry other visual effects. Offputting or profound, it is for the reader to decide. An irreverent but well-weighted glossary of terms is a laudable addition to the endpiece, but perhaps the jewel of the book is an interview with Turk appearing in the final pages.

After reading almost two-hundred pages of people writing about Gavin Turk, the artist in his own words is refreshingly concise and affable, sparkling with intelligence and knowing, and disarmingly self-aware. For the most craft-focused of the YBAs, Turk appears here as the one least dependent on craftiness. To his enduring credit.