[dropcap style=”font-size:100px; color:#992211;”]O[/dropcap]ur planet’s largest animal. The blue whale, a majestic and social creature, graceful and balletic in all its stupendous mass.

Now, satellite tagging means that pods of the magnificent cetaceans can be located, tracked, and their whereabouts relayed to international shipping so as to avoid disturbing their activities.

Um, maybe better to keep that information out of the hands of Japanese ‘research’ vessels though, hmm?

Scientists have long used satellite tags to track blue whales along the West Coast, learning how the largest animals on the planet find enough small krill to feed on to support their enormous size.

Now researchers from NOAA Fisheries, Oregon State University and the University of Maryland have combined that trove of tracking data with satellite observations of ocean conditions to develop the first system for predicting locations of blue whales off the West Coast. The system, called WhaleWatch, produces monthly maps of blue whale “hotspots” to alert ships where there may be an increased risk of encountering these endangered whales.

NOAA Fisheries has begun publicly posting the maps on its West Coast Region website each month. A new scientific paper published today in the Journal of Applied Ecology describes the development of the WhaleWatch system and the methodology behind it.

“We’re using the many years of tag data to let the whales tell us where they go, and under what conditions,” said Elliott Hazen, a research ecologist at NOAA Fisheries Southwest Fisheries Science Center and lead author of the new paper. “If we know what drives their hotspots we can more clearly assess different management options to reduce risk to the whales.”

Helen Bailey, the WhaleWatch project leader at the University of Maryland Center for Environmental Science and coauthor of the paper, described WhaleWatch as an innovative combination of satellite technology and computer modeling that will help protect whales by providing timely information to the shipping industry. NASA helped fund the project, which draws on ocean observations from NASA and NOAA satellites.

“This is the first time that we’ve been able to predict whale densities on a year-round basis in near-real time,” said Bailey, who specializes in studying the movements of marine mammals and hopes the same approach will be used for other species of whales. “We hope it’s going to protect the whales by helping inform the shipping industry.”

Blue whales are listed as an endangered species, although their population has increased in recent years. Earlier research has found that shipping lanes to and from Los Angeles and San Francisco overlap with important blue whale foraging hotspots, putting whales at risk of fatal ship strikes.

Studies have found that ships off the West Coast strike an average of about two blue whales a year, although some ship strikes probably go unnoticed.

“No ship captain or shipping company wants to strike a whale,” said Kip Louttit, executive director of the Marine Exchange of Southern California, which tracks ship traffic into and out of Southern California ports. “If we can provide good scientific information about the areas that should be avoided, areas the whales are using, I think the industry is going to take that very seriously and put it to use.”

NOAA Fisheries has developed a California Current Integrated Ecosystem Assessment to examine how environmental conditions affect marine resources including whales and other marine mammals. Hazen said WhaleWatch could help evaluate different management strategies to tell whether they are effective in reducing risk to whales. 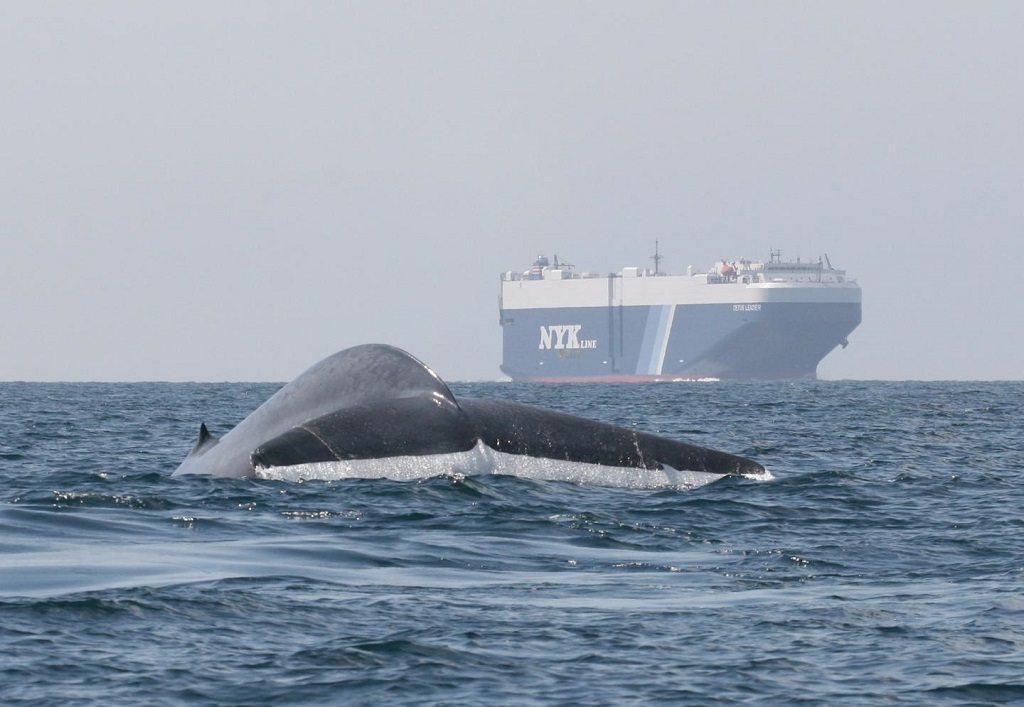 “This is where science meets management,” he said. “Now we have the tools for scientists to predict outcomes of different decisions or choices.” As the scientists note in the new paper, the WhaleWatch model “provides a critical step towards developing seasonal and dynamic management approaches to help reduce the risk of ship strikes for blue whales in the California Current.”

Maps produced by the model may also prove useful to fishermen who want to reduce the risk of whales becoming entangled in lines attached to crab traps or other gear.

The strength of WhaleWatch is more than a decade of tracking data collected by Bruce Mate of Oregon State University and his team for more than 100 blue whales from 1994 to 2008. Hazen used computer models to look for relationships between the movements of the whales and environmental factors such as ocean temperature, chlorophyll concentrations and other factors.

“Nobody has ever had a database like this for any whale anywhere in the world,” Mate said. “These aren’t guesstimates of how whales may respond to certain conditions, but actual data on how they did respond, which improves the accuracy of the predictions.”