Afraid not. This is what real, non-fake, news looks like.

Forget delivering packages or taking aerial photographs–drones can even count small birds! A new study from The Auk: Ornithological Advances tests this new approach to wildlife monitoring and concludes that despite some drawbacks, the method has the potential to become an important tool for ecologists and land managers.

Bird surveys provide crucial data for environmental management, but they have limitations–some areas are difficult to access, and surveyors vary in their skills at identifying birds. Using audio recordings made by unmanned aerial vehicles (UAVs) can help to combat both of these pitfalls, as hard-to-reach sites can be flown over and multiple people can review the resulting recordings. Andrew Wilson of Gettysburg College and his colleagues tested the feasibility of this approach by using fishing line to suspend an audio recorder from a simple “drone,” first in trial runs on college athletic fields and then in real bird surveys on Pennsylvania State Game Lands.

The experiments on state game lands directly compared UAV data with traditional ground-based surveys of the same areas. A few bird species were undercounted by the UAV technique, such as Mourning Doves, whose extremely low-frequency calls weren’t picked up by the recorder, and Gray Catbirds, which occurred at such high densities that counting individual birds in the recordings was difficult. Overall, however, there were few significant differences between the results produced by the two methods. 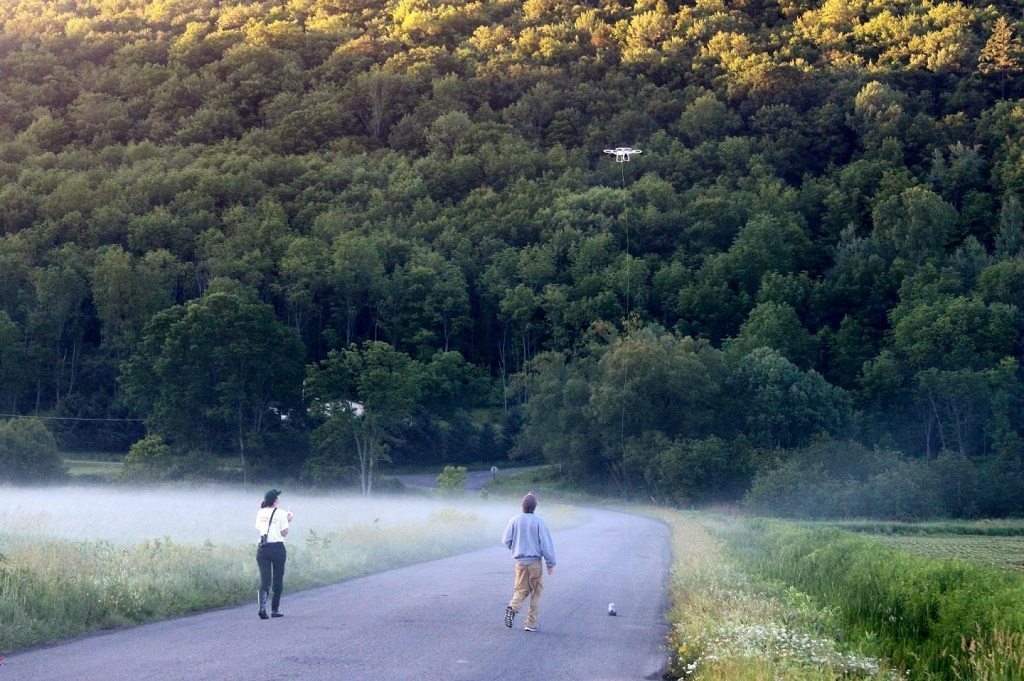 “The inspiration for the study came while I was surveying forests in the Appalachian Mountain in Pennsylvania for Cerulean Warblers,” says Wilson. “All of our survey work was done from roadsides or hiking trails, for logistical reasons and to maximize survey efficiency, but I was always aware that our sample locations were very biased and that we were missing key areas such as steep forested slopes.” He notes that the drone and audio recorder used in this experiment were inexpensive, commercially available models, making this technique within reach even for those with limited funding.

“I recall my vocal reaction upon hearing their oral presentation during a session I chaired on emerging technologies to study birds at the 2016 North American Ornithology Conference last August, where I exclaimed, ‘What an amazingly simplistic but useful application of a drone for bird research–I wish I had thought of it!'” says McGill University’s David Bird, founding editor of the Journal of Unmanned Vehicle Systems. “This unique study provides a significant first step toward the inevitable common use of unmanned vehicle systems for monitoring songbird populations both during the breeding season and on migration.”

Next Story:
Lost in the Ghost Light (Tim Bowness)