Arts Catalyst : Republic of the Moon

An exhibition about the moon that proposes a Manifesto should by rights fall apart in great steaming chunks of hubris, but it doesn’t, it has value and holds interest by raising lasting questions.

It reflects the sun’s light by degrees, but more importantly, gives something to think about, with, and through. The Republic of the Moon exhibition similarly holds a mirroring question about the relationships between inspiration, artist, and public. 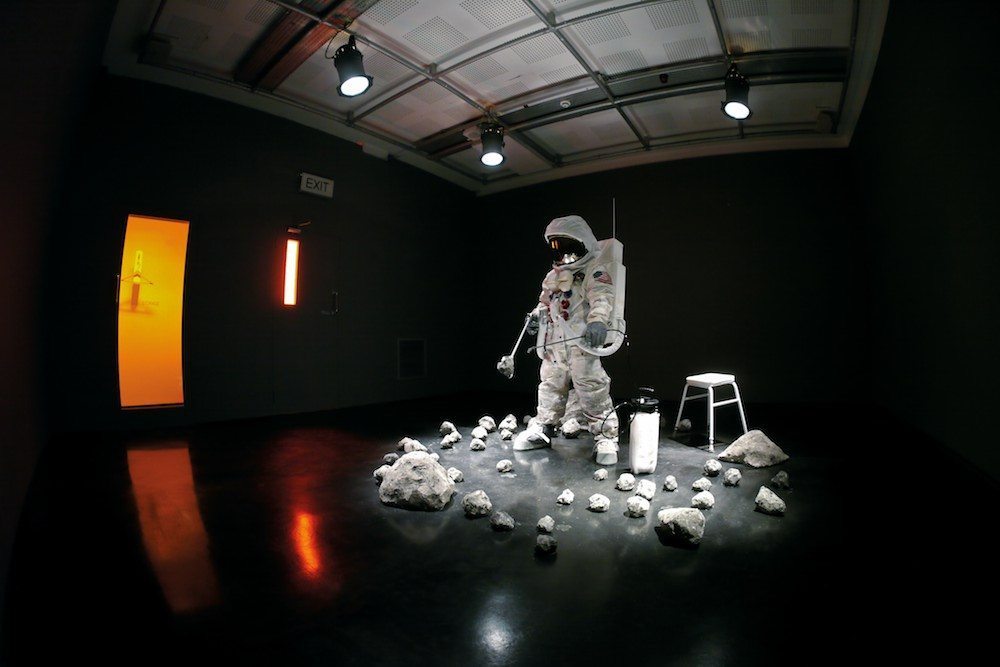 WE COLONISED THE MOON, ‘Enter at Own Risk’

Originally a curatorial project started in Liverpool in 2011, this exhibition is culmination of several previous ventures featuring the work of several international artists, some of whom:

“have been asked to describe what an artist would do on the Moon. Other approach a Republic of the Moon from different angles”

Accompanying the exhibition is a printed manifesto which collects several politicized views of the moon, its exploitation, its liberation, and its separation. 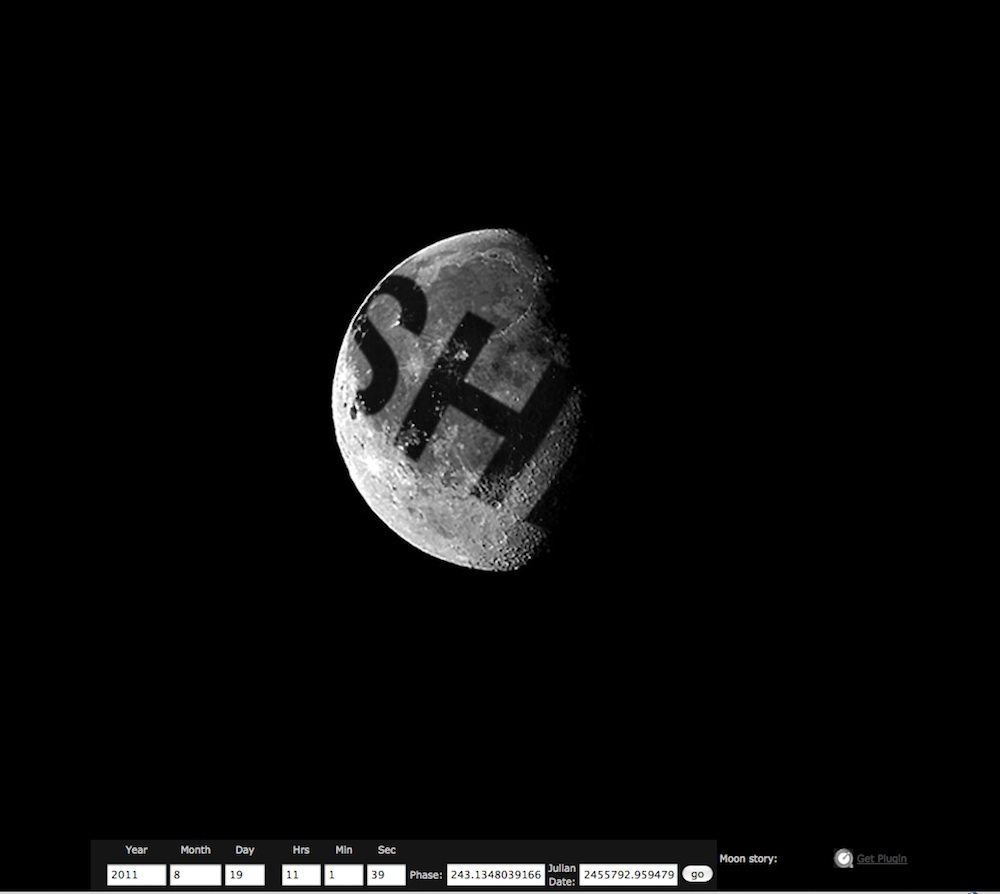 Another tangent visible in many of the works is how historically art was one of the inspirations of science and how that bond continues into contemporary art. Currently, technological innovation is pushing the forms of art and in some respects this exhibition could be seen as a riposte, to claim that art’s formal diversification has led to a general lack of depth.

While the moon as metaphor governs the exhibition it’s interesting to think how these pieces operate outside of some basic parameters. For example, just as a reflection reveals the nature of both the source and the surface, many of the artists on show display, with greater and lesser success, the manner in which the artists exploit, liberate or separate the moon from its serene celestial meaninglessness. Let us not forget that the moon is a rock moving around another rock. However, the primeval drama of day and night, dark and light, has for humans always had two great characters: the sun and the moon.

Faced with the epic scale of history, story, and culture what then can these artists say to match the breadth of the canvas?

Quite a lot as it turns out.

Standing out for particular praise are the most accomplished cold witticisms of Katie Paterson and the emotive work Leonid Tishkov, both of whom managed to give the moon unique voices through very different approaches. 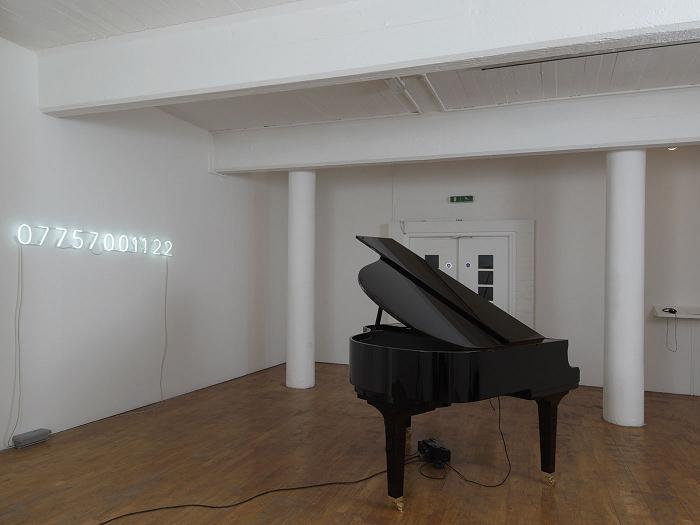 Paterson’s work, characterized by her involvement with scientists and technology, is remarkable in how it tries not to place a mask on the moon. Of her two pieces on show, the first was to courier a piece of moon rock around the world in orbit, mirroring the moon in miniature.  [quote]testament to a fertile

willing to take real risks[/quote]Her second piece bounced a radio transmission of Beethoven’s ‘Moonlight Sonata’ off the moon, where it was played back via a grand piano. The contours, valleys, and craters of the moon distort the signal, making the result a strange musical analogue of the moon’s surface.

The intellectual appeal of Paterson’s work is matched by a glacial emotional distance, a sensory dullness that draws emotion out of a viewer searching narcissistically for something human in what is a blank achievement. Paterson’s success is that this lack of emotion isn’t a failure in her art but a real success as we’re drawn along in its wake, engaged but unacknowledged.

Conversely, Leonid Tishkov’s “Private Moon” is emotive and busy, suggesting (perhaps even creating) universal myths where the artist is shown in various scenes with an illuminated moon that takes on a sense of character, reminiscent of the writing of Calvino or Bulgarov.

We could, conceivably, turn to someone for support. But we are still lonely…. However, that shouldn’t make us grieve or suffer. Loneliness of this sort means that we exist, we are here, we are at the center of the universe and we are comparable to the Moon, to the other celestial bodies.” – Leonid Tishkov. 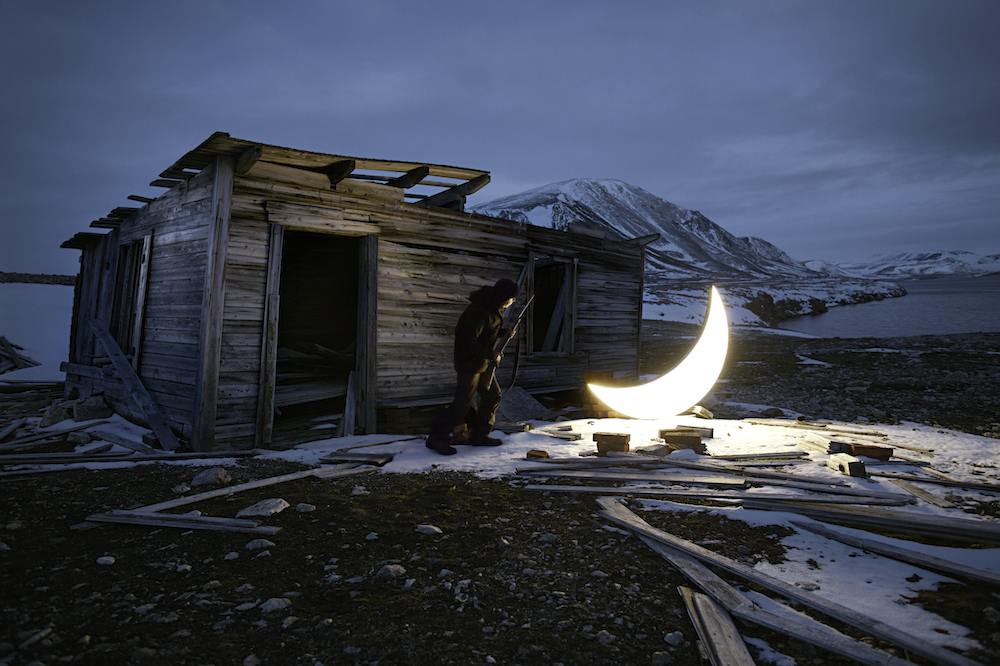 Deeper than the poetic myth that Tishkov seeks to create is the sense of process that accompanies his work. The lunar myths are his. However, the other myth of the artist and their creative muse, is one that contains the richer vein of emotion. The videos and photographs show us Tishkov creating a scene and, while beautiful, it is the craft, effort and process that is that much more affecting. 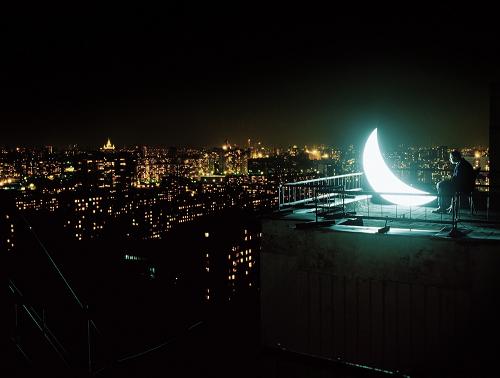 The pain and struggle to create these scenes, the artifice, the ritual process itself is the Promethean character that illuminates the ghost that he carries around with him.

There is a lot to appreciate in this Arts Catalyst exhibition and if the variety of work shown doesn’t do much to further a unified or singular concept of a Republic of a Moon it’s a thrilling show that is testament to a fertile and vigorous art culture willing to take real risks.

An exhibition about the moon that proposes a Manifesto should by rights fall apart in great steaming chunks of hubris, but it doesn’t, it has value and holds interest by raising lasting questions.

Such as, why does the position of the moon, the earth, and the sun as relational concept echo globally throughout human dialogue (with perplexing variety) if it’s a largely singular experience? One such vision sees humanity’s yearning towards a brighter day, whereas another perspective sees our rapacious need to claim ownership over everything: intellectually by taxonomical knowledge, emotionally by anthropomorphism, or physically by the eternal footprint of a jackbooted flag bearer.

Inset image shows Liliane Lijn, ‘moonmeme, image of the word SHE projected onto the moon’

Previous Story:
Is there a Sixth Sense?