Whilst being influential is satisfying, it’s frustrating watching your artwork become an unattributed meme

[dropcap style=”font-size:100px; color:#992211;”]I[/dropcap]t’s long been the dirty secret of social media that, deep in the terms and conditions, there are obscurely worded little clauses deeming any and all content uploaded as instantly the intellectual property of the site in question.

And whilst an Instagram shot of your old flipflops ending up on the cover of an indie album may provoke little more than nonplussed resignation on your part, you may wish to think twice about using Gmail to discuss your potentially profitable breakthrough in widget technology with a collaborator, lest you find your idea swiped, patented and (entirely legally – you signed up for the T&Cs) adding to the not-inconsiderable coffers of the Big G.

New media is no respecter of your intellectual property. Information, as the mantra goes, wants to be free (unless it’s their information. Try slapping an Apple logo on your product and see how far you get.)

A recent victim of new media intellectual landgrabbing is pornographer of the surreal and one-man subculture Alva Bernadine, who spoke to Trebuchet in November 2015 about his Forniphilia project, and returns now to tell of skullduggery at the hands of Snapchat.

Alva Bernadine: I recently received a message from one of my Facebook followers that Snapchat had plagiarised one of my videos to use as a selfie filter. He sent me a link to Metro, a daily London newspaper.

Not long before this I had read an article about Snapchat trawling the web and stealing other people’s ideas, some of which disappeared over night when the owners complained.

In the November of 2010 I made a test for a short horror film I was planning of a woman with mouths for eyes. I sat a model down and had her pull a few faces for me, then did the visual effects in After Effects, which I had taught myself enough of to believe I could pull it off. The result was so peculiar and humorous I thought I would upload it to YouTube. I named it Born With Three Mouths. 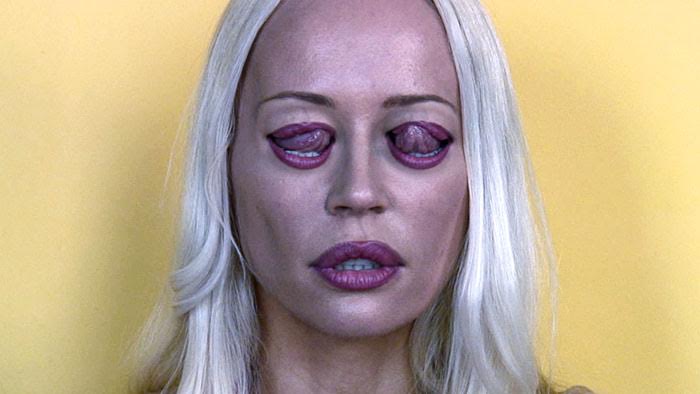 A year later it went viral and I got about 7 million hits and a lot of attention from it. I later went on to experiment with three more clips including an interview with a girl with a split tongue.

Since then I have had my work reflected back at me from surprising directions. I got messages from my followers on Facebook about two or three pop videos and other YouTube clips that they thought were influenced my the work. One was an Azealia Banks pop video, ‘Yung Rapunxel’, (2013). I also had other types of video pointed out to me.

While it is quite satisfying being influential, on the other hand it is quite frustrating to see one’s work turning into a meme without anybody knowing who the originator is. Back in June I read of Snapchat stealing the ideas of makeup artists, (not realising at the time I was also a victim) and several other cases. The Ringer did an in-depth report on the phenomenon, and there was also an article in the Metro.

Next Story:
Drinking for Two. Does Marriage Increase or Decrease Alcohol Consumption?