Experiential visions that are both magical and foreboding, familiar and strange

Adam Lee’s new exhibition, This Earthen Tent at BEERS London juxtaposes the intangible with the tangible through strategic manipulation of colour and paint.

The protagonists in Lee’s works appear suspended in dream-like environments that often lack a clear narrative. Each painting acts as a fragment of a disjointed, yet somehow cohesive whole, creating a unique space that invites an imaginative response from the viewer.

The title of the exhibition is suggestive of the protective and homely evocations of the Australian terrain that surrounded Lee whilst painting the works in his barnyard studio in the Macedon Ranges outside of Melbourne. This immersive site of creativity translates to his artworks, which capture atmospheric visions that shift in and out of figuration.

Lee refers to this blending of the temporal and transcendental as a “divine reality”. His paintings are inspired by the spiritual qualities emitted from historical religious artworks. The artist pushes this idea in new directions by placing emphasis on the painting medium itself, rather than utilising a traditional figurative style and religious iconography. Most works have a smudgy dark-hued background, achieved through the use of dry brush, whilst foreground details are accented with pops of thickly applied warm tones of paint. This high contrast in both mark making and colour creates a sense of fluorescent movement, giving the works life and emotion, as well as evoking the otherworldly.

The painting I and Thou depicts two figures affectionately leaning their heads against one another amidst a dark inky blue landscape of sea and sky that blends into their blue bodies. A bright yellow expanse emanates from behind them, emphasising the warmth and tenderness of this gesture.

Several other artworks exhibit figures that shift in and out of their environment, playing with the viewer’s perception. Self as Hermit is composed of a smattering of yellow dots that materialise a figure upon closer inspection. These visual tricks take on a more serious tone in Our Song In The Night. The artwork exhibits what looks like a woman and child in a cozy home setting, their brightly patterned surrounds and clothing distract attention away from the faint, grey figure they are tending to. The girl pushes down on the lying figure’s chest as if to resuscitate them, whilst the woman caresses their head. Yellow outlines of the upright figures’ features create a strange X-Ray effect that further intensifies the scene. 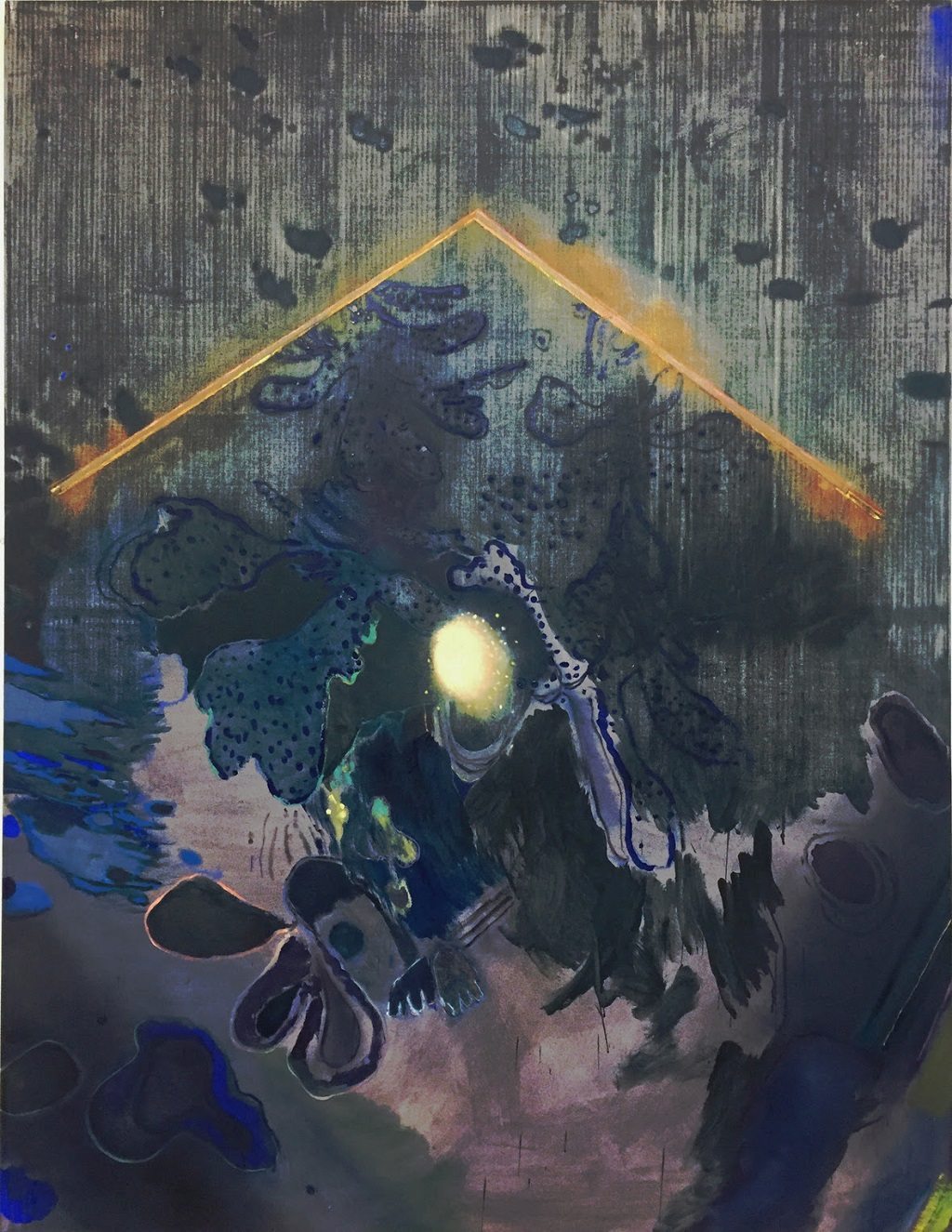 The namesake work for the exhibition, This Earthen Tent, conveys a more reassuring idea of home through symbolic means. Two straight orange lines meet to form the shape of a roof, giving grounding and stability within a blue abstracted expanse. The streaky background reveals the production of the work, envisioning the artist’s hand scraping back the painted surface of the canvas. Under the roof is a shining yellow oval, perhaps the face of a traveller seeking shelter.
It is through this emphasis on the suggestive rather than the concrete that the artist conjures experiential visions that are both magical and foreboding, familiar and strange.

This Earthen Tent is on display at BEERS London until September 30th, 2017.

Next Story:
Culling Yet More ‘Savages’: North Korea in Context