Joan Pope uses her body to promote her religion and calls it art, you decide.

A lot of what you see and hear these days in the contemporary arts will approach the old subject of life and death, but few really form their own religion and use their own body as the subject matter in contemporary arts, particularly to persuade the masses to the gates of said religion. In this we have Sex-death-rebirth – a new, rather sexualised religion that is led by the artist known as Joan Pope.

level with creating a religion centred on sex,

death and rebirth and its viral carrier

of social media and the arts.

The focus? the life and death of the body; the living, breathing organism that contains blood and guts, bone and muscle, covered in porous skin

I found Joan Pope on Twitter of all places – I’m new to the Twitter world as my own rebirth as NAPINCO – my last twitter account was resided to alcohol fuelled tweets that brought trouble for me when confronted by quite a famous comedian who I find less than funny (the one who carries plastic bags on stage and wears thick glasses). Anyway, I digress, so twitter is what brought Joan Pope and I together and after some ego smoothing by each other about each other’s artwork I proposed an interview – that’s the story and I’m sticking to it.

I guess this is where one of us went wrong – I, a writer, went with what the artist in question wanted, I wrote down a few questions and popped them over the interweb through Twitter. It is the strangest of interview techniques to discuss sex, death, and rebirth, something that preoccupies the mind of Joan Pope.

As a self-proclaimed philosopher queen, Joan Pope makes most artists I’ve come across seem quite tame – this is superb in my eyes, particularly as most artists are more akin to hiding the facts that they are the chosen ones. After all, being a mother-f@*king artist is the dream of most – to live off the ability to just produce whatever you like and don’t care whether people like it and make money off it.

For Pope’s business model is selling of surrealist erotica-based music and books to further her own philosophy and religious movement (Sexdeathrebirth) which she promotes through social media and her websites. It is not for me to agree or disagree with the ethics of her practice as I am trying to be the voice that brings debate to her work. And with this I pose an ethical question, is it morally right to sell sex in this way to further a religion?

How far does Pope’s surrealist erotica go in the form of selling of sex you might ask? Isn’t that a question that should be answered in laymen terms before we start with the greater question of whether it is morally right to sell sex to further a religion? I guess the quick answer to the surrealist erotica question is that erotica is the selling of sex in a form that seems morally good/high enough subject for society that there are erotica sections in your local WH Smiths for it.

So if WH Smith sells sex for money, why ask whether selling sex for religious purposes is any different? 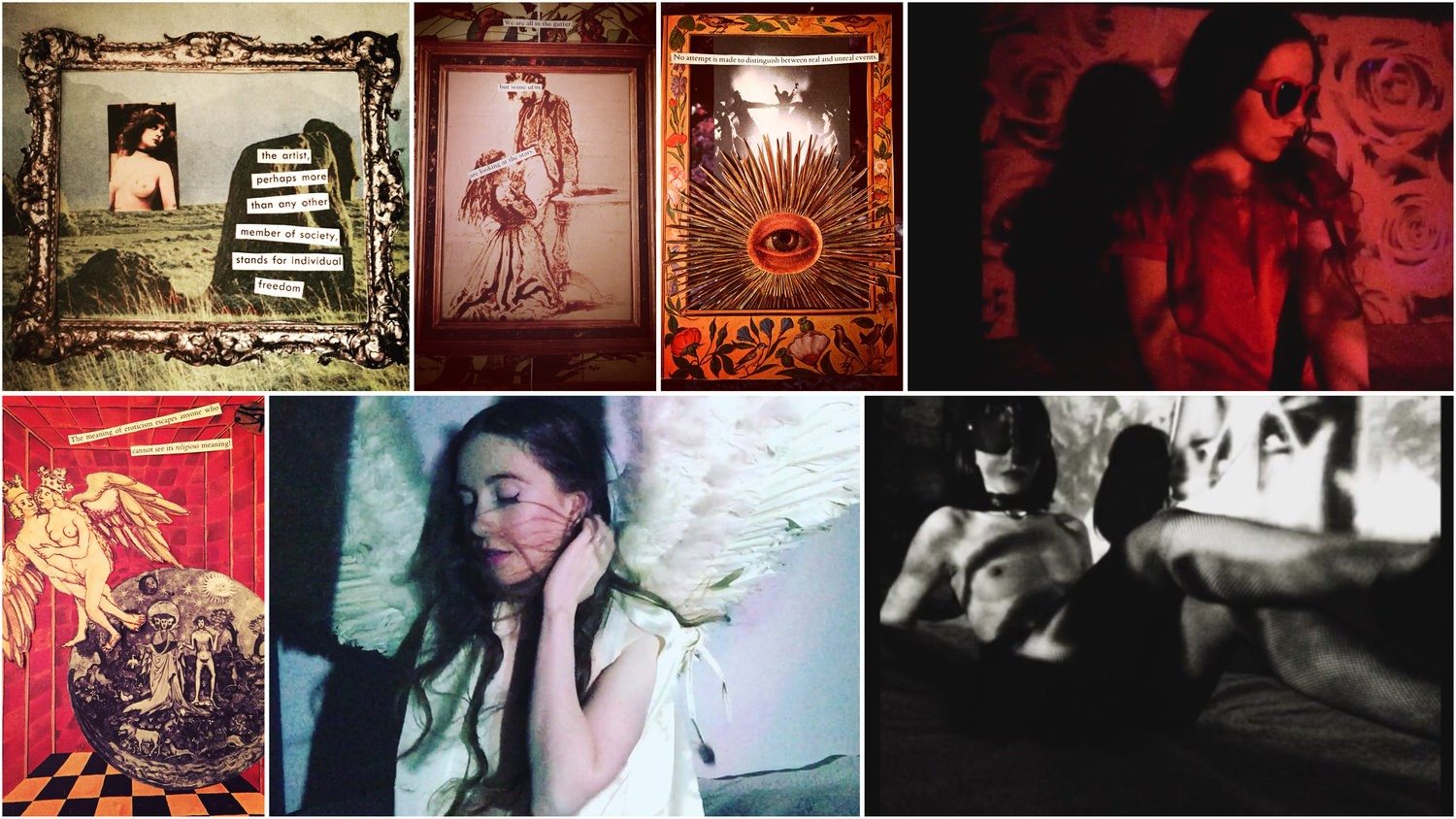 We are here talking about an artist, Joan Pope, that deals in erotica; no matter how surreal it may get and how disfigured it is, it is still the selling of sex. Pope is great in her form of artistic expression and presentation on the screen and is a musical prodigy of her genre – and I don’t take the piss, Pope’s lyrics are of a philosopher and the accompaniment that follows her voice is terrific. So why would Pope need to focus all her attention and energies on erotica?

The answer to that one, it seems, is a simple one. Sex sells. For if Pope focused only on death and rebirth there would be no fun in the middle, no? And fun sells right? i.e. sex sells, right? What Pope does is done in a fashion that absorbs the viewer, listener, or reader. Her form of colour explosion on top of sexual flirtations with an almost Andy Warhol attempt of filmography batters the senses.

She is stunning for one, second, she has artistic flair, and thirdly, and most importantly, is in complete control of the artistic direction of her own work. This is unlike any Marylyn Monroe or Edie Sedgwick, who, in most parts were bodies of work that photographed and used rather being the artists. It is here that exploitation of individuals comes into the fray – in the selling of sex that is a great question of our time, which relates to most international legislation and debate around body politics.

So I wonder, and I question, why would a young lady that holds and produces such surreal view points and art not have been swept up by the media as of yet! As Pope said to me over Twitter, she feels like a bit of an awkward interviewee – so I guess I struck lucky with this snapshot of what Pope is about…

“What brings you to this world? The art world that is?”

JP “To prove that philosophy is not just for a dusty bookshelf, to make my own religion.”

“What do you think of the phenomenon that is social media?”

JP “Social media can be a great tool for fostering the sacred- transcending time differences and geographical distances, we can use social media to find those who resonate with us on a deeper level than perhaps those social connections we make based on physical proximity,”

As an individual that works in many forms of the arts – music and practicing collage, how do you express your philosophy in your work?

JP “I use many modes of communication to address the answers to the questions I provoke- occasionally in writing, but mostly through the universal language of visual symbols, but also with sound, and with my body,”

And lastly, I asked her if she would like you to answer some of her own questions such as “Are human beings merely animals, doomed to self-annihilation, or are we the bridge to something greater? Are human beings a middle ground between heaven and earth? What is the sacred? Can sex be sacred? Why do we die? Do we have divine potential? What is the purpose of religion? What do our words have to do with it all?” (taken from her website) she came back to me with this…

JP “When I describe myself as a “Philosopher Queen” I mean that as my role is the one where I ask the questions. You’ve asked me to answer my own questions, but it defeats the whole purpose of my creative works to answer them for everyone. What benefit is it if I were to hand you my answers to the above questions on a platter? Those who view and listen and experience my work will get much more out of it if they truly examine my works and answer those questions based on what they see and hear, and apply it to their own experiences and their own research. It may seem like I’m taking the easy way out- but who can really expect me to give out a definitive answer on the big truths of the human experience?

I believe in truth, but it’s difficult to communicate directly. It comes from inside us, and the sacred is those rare moments when we are on the same page as another. That is perhaps the initial purpose of religion- to create a system that brings a community to that elusive sacred moment. I call what I do a religious organization, but it is mostly an anti-organization.

The system is loose by design, as we can see with religion, government, high education- these institutions often start off with the best of intentions, but over time they become corrupted. I try to give it just enough form that you can tell it exists, but hold back before it can be grasped and twisted into a means to control others thoughts and actions. Make your own religion! That’s what I suggest, always. The religion of Sexdeathrebirth is just a way to help you to get started, to show you that its possible to think for yourself. I know that seems self-evident, but look at the world- there are so few truly free thinkers. We live in a time where more and more

people are “educated” but they are not wiser than generations past. Perhaps they read philosophy, but they don’t DO philosophy.

Of course sex is sacred to me. Its our reason for being. It is the method we use to bring new life here, and it is a means to communicate the whirl of love, desire, and beauty, and the meaning of life and death with our partners. There is truth in sex. Its the most animal part of us, but also the most transcendent- the driving force of our species, and culture. Its where filth and god meet, where polarities are briefly resolved- that is one way to experience the sacred.”

Do you think sex sells? And is it morally right to sell sex?

JP Sex is used to sell virtually everything, whether its a product or an idea, so I think its fair to say that yes, sex sells. Whether or not its moral to sell sex, is up to the people who buy and sell it to decide.

So here we have it, on this basis there is a lot of truth flying around about the moral standards of selling a sacred thing in furthering and transferring one’s own religion! God don’t you love religion!

Previous Story:
Do Not Go Gentle Into That Good Night

Next Story:
Quality is King: Building a New Clothing Line