What’s Behind The Mask? 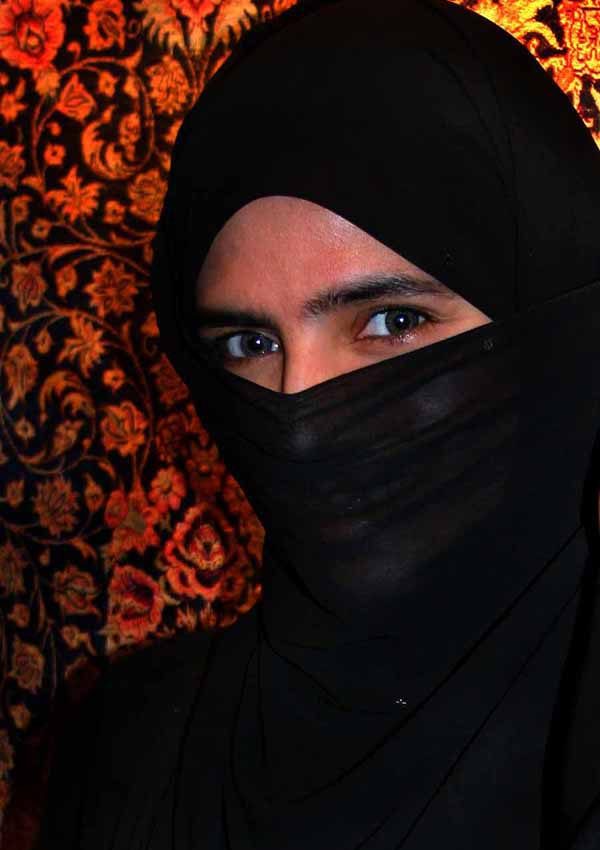 [dropcap style=”font-size:100px; color:#992211;”]T[/dropcap]he veil issue is hot news right now. Last week Trebuchet looked at one side of the argument.  This week, we look at a different perspective.

With a national debate on the cards, the argument about banning full-face veils has certainly reared its partially obscured head again. Can we really tell people what to wear or to disregard their religious beliefs?

We all know that women who wear revealing tops and short skirts are really just asking for it and those wearing veils are undoubtedly terrorists or have something to hide, right?

Subject to the exemptions in subsection (3), a person wearing a garment or other object intended by the wearer as its primary purpose to obscure the face in a public place shall be guilty of an offence.

Despite David Cameron and the Department for Education endorsing its right to have such a policy, Birmingham Metropolitan College recently backed down on its ban on Muslim face veils after an outpouring of local protest.[quote]When women around the world strive

for the freedom not to be forced to wear

clothing against their will, we have

this strange cry for some to cover

themselves completely up despite

their religion not truly requiring it[/quote]

Last week, police released the mugshot of fraudster Shaheda Lorgat who hid her face behind a Muslim veil as she turned up to court for hearings after being charged with stealing £21,000 from her college workplace in Blackburn, where she worked as a purchasing officer.

Neighbours stated they had not previously seen her wear a veil so were perplexed as to why she wore one to court. She presumably didn’t want to be recognised. She did however have to show her face to the judge, jury and lawyers so they could see her facial expression whilst she was testifying in her defence. She was convicted and sentenced to a year in prison.

One of the big spoons in the stirring pot is Jeremy Browne, Home Office Minister, who has called for a national debate on the issue of public sector bodies wishing to ban staff from covering their faces, surgeons excluded.

With no national guidance on uniform policies and no such ruling made by the majority of the 160 NHS trusts in England, it appears to be down to the discretionary decisions of local managers as to whether the veil can be worn by front line staff for religious reasons. It has been revealed that 17 NHS hospitals have already instituted a ban on front line staff wearing the niqab while they are in contact with the patient. Surely an all-encompassing rule should be brought in here, be it for or against. The same rule should also be brought in for schools, colleges and universities.

A review of all current health care guidance on this issue has been ordered by health minister, Dr Dan Poulter. Clinical regulators have been asked to draw up very clear rules in respect of banning the face veil by staff whilst in contact with patients.

Bearing in mind the seeming lack of cleanliness in todays NHS hospitals, the wearing of a face covering may actually be a good thing. But what about the  traditional image of the kind and caring face of the nurse that reassures you as you lie in your hospital bed in a weakened state? Do we really want Darth Vader looming over us instead?

In respect of the aforementioned Mr Browne’s call for debate, Mohammed Shafiq, Chief Executive of the Ramadhan Foundation, published these comments on 16th September 2013:

“I am disgusted by Jeremy Browne MP the Home Office Minister calls to ban Muslim women from choosing how to dress in accordance to their personal choice. This is another example of the double standards that are applied to Muslims in our country by some politicians.

Whatever one’s religion they should be free to practice it according to their own choices and any attempt by the government to ban Muslim women will be strongly resisted by the Muslim community.

We take great pride in the United Kingdom’s values of individual freedom and freedom of religion and any attempt by illiberal male politicians to dictate to Muslim women what they should wear will be challenged.

I call on the Liberal Democrats to disown these illiberal comments from Jeremy Browne and ensure that no government with Lib Dem participation introduces this stupid bill. If they fail to do this then they will face the consequences at the next general election from Muslim voters.

We would expect these sorts of comments from the far Right and authoritarian politicians and not from someone who allegedly believes in liberal values and freedom.

I hope common sense prevails and feminism and the right of Muslim women is respected and protected”.

In an Act of Parliament in 2010, France banned the wearing of face coverings, including helmets, masks, balaclavas, niqabs and other veils and face coverings. The supporting argument was that such face coverings prevent clear identification which is both a security risk, and a social hindrance within a society which relies on facial recognition and expression in communication. The key argument against the ban is that it encroaches on individual freedoms.[quote]The Quran requires only that women

and men dress modestly. Beyond that, it

coverings of any form for men or women[/quote]

The Quran instructs both men and women to dress in a modest way. The Quran requires only that women and men dress modestly. Beyond that, it doesn’t appear to require face or full-body coverings of any form for men or women.

As far as I am aware, during Prophet Muhammad’s life, the veil did not seem to be an issue. His wives didn’t wear it, nor did he require other women to wear it. As his wives gained stature and he himself became more important in his community, Muhammad began adapting Persian and Byzantine customs. The veil was among those.

The Quran does address veiling explicitly, but only in so far as the Prophet’s wives were concerned. The wives were to be “covered” or unseen, when in the company of other people. The Quran’s requirement did not mention a veil as it is understood in the West, as a face covering, but a hijab, in the sense of a “curtain” or  separation. This seems to be a relevant passage in the Quran, known as the “Verses of the Curtain”:

Believers, do not enter the houses of the Prophet for a meal without waiting for the proper time, unless you are given leave. But if you are invited, enter; and when you have eaten, disperse. Do not engage in familiar talk, for this would annoy the Prophet and he would be ashamed to bid you go; but of the truth God is not ashamed. If you ask his wives for anything, speak to them from behind a curtain. This is more chaste for your hearts and their hearts. Sura 33:53.

Taking this information on board there does not seem to be any real need for women to cover up in the way they do and therefore the calls to ban such attire are surely justified.

In this Western society it is deemed unacceptable that a woman should be forced to wear something against her will and it is felt that many of these women are indeed being made to do just that by their husbands or families. Jeremy Browne’s call for a national debate asks for the State to step in to prevent women having the veil imposed on them.

When women around the world strive for the freedom not to be forced to wear clothing against their will, we have this strange cry for some to cover themselves completely up despite their religion not truly requiring it. It’s difficult to see the truth behind these decisions of supposed free choice. There seems to be a shadow of coercion here.[quote]In this Western society it is

a woman should be forced

to wear something against

In these times we are also very mindful of terrorism. We are all very aware that face coverings have a serious security implication.  People are also generally fearful of those with a masked identity, this includes motor cycle helmets and balaclavas. The general public want to see the next man’s face. If someone walked into a bank with their face covered you would worry, perhaps panic. In the main that is also true of most places and situation.

The majority of people do not have their heads and faces covered and are made to feel uneasy or even offended by those that do. If one has to remove a motorcycle helmet in a bank then why should anyone else be allowed to keep their face covered? Your face needs to be seen for security purposes, be it in a club, a bank or an airport.

Communication within the human race is conveyed not just verbally but largely by facial expression, something that has evolved over millennia. The covering of the face simply cuts out a huge part of that communication process and makes it extremely difficult to establish any kind of trust. After all, expression elicits reaction, which can often imitate the emotion being observed.

A smile is infectious. As human beings we are extremely good at recognising, interpreting and reacting to facial expression.The human face is not something that should be covered in any sector requiring ‘face to face’ communication.

So this debate has nothing to do with race. It’s about establishing trust and intent, integration and general acceptance. If I moved to another country I would want to integrate into that society and fit in with the native population and the general codes of acceptance. I would keep my beliefs, yes, but if the general population wore top hats then I would have a big one. When in Rome, my friend.

In this (supposedly) free Western society, the banning of veils and other facial coverings seems to go directly against human rights. A middle ground needs to be struck here but a ruling in the broad sense on face coverings must surely come into play. Not a discriminatory ban against Muslim dress but a ban of any face covering in public places including masks and motorcycle helmets.

Previous Story:
Wait for the Drop. Anticipation and Music