Anglo-Madri-Mexi, Sinuous and Sexy – Jenny & the Mexicats hit the Con Club in Lewes

The gods make musical machines by engineering coincidences. If you want to discover the strange confluence of events that led an English girl to the top of the charts in Mexico just check out the narrative below.

In 2008 singer Jenny Ball was visiting Madrid doing some low key performances and happened upon a flamenco club.  Strutting her stuff on the dance floor she cut her heel and found help from the waiter, Alfonso Acosta, who brought her a plaster to relieve her woes. At this point Alfonso and the club’s sound technician Luis Diaz were already jamming and gigging in rocksteady, ska and punk bands at local Madrid hangouts. So when they realised Jenny was also a musician based in Brighton, they eagerly swapped contact details and that, they thought, was probably that.

Like most occurences in the Mexicats’ regalia of ‘unbelievable’ stories, this unplanned event would lead to the most unlikely partnership. The band have lived and upped sticks across three different countries, been swindled by record industry managers and been banned by UK immigration; all of which would provide the perfect underlay for the group to deliver their debut album in 2012 from Mexico City – which would later go gold in Mexico after selling 30,000 copies. 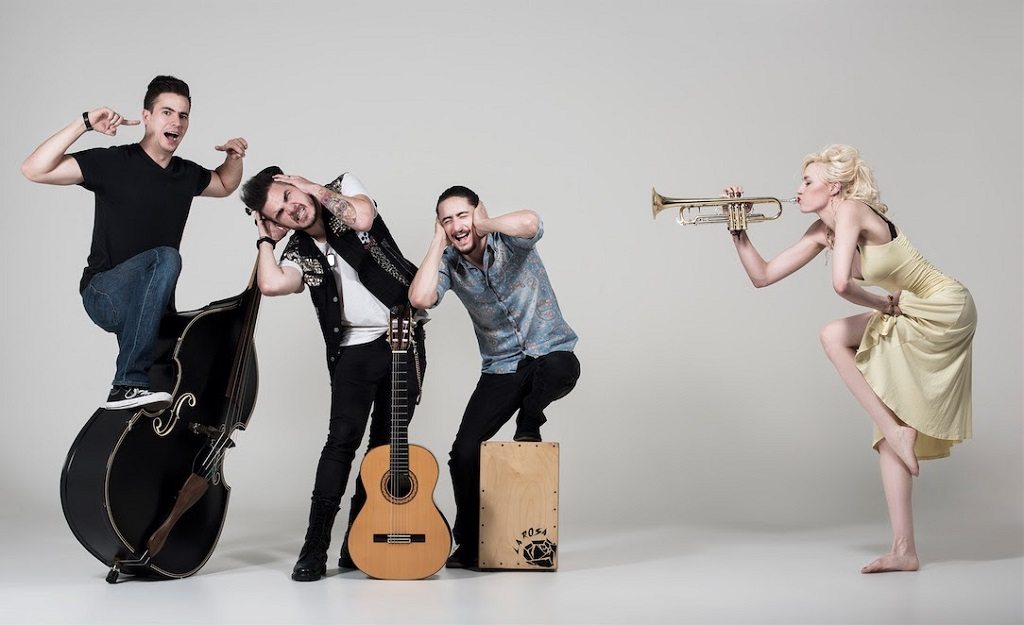 And that’s exactly how the music gods do their mysterious work by accident-building a transatlantic bellyful of 3rd World grooves fronted by an extremely talented woman who exudes a raw yet sinuous sexuality. I note that blood was shed in the process.

Live at the Con Club in Lewes the outfit oozed both class and warmth with a set that constantly changed pace and showed no trace of drag – an act that can bring solid entertainment to both stadiums and more intimate venues. I could see them again to discover different pleasures, and if I get the chance I will.

Original song constructions with attractive sophisticated melodies? Yes
Intuitive theatricality built in to the showmanship drive? Yes
Cheesegrater option? Although liveliness and feelgood options are in place they are completely stripped of any kitsch elements.
Danceability? Without a doubt – an irresistible toe-tapper trigger system
Confident application without unnecessary ‘attitude’? Yes
How many moving parts? 6 pieces and a vocalist (2 guitars, stand-up bass, 2 percussionists and a keyboard player)

Oh and Jenni plays a mean trumpet from time to time.
She plays trumpet as well?

Oh Yeah and if Trump the Donald ever gets that stupid wall built Jenni and her gang will be on hand to break it down brick by stupid brick.
Because when the Gods make musical machines they do so for specific purpose.

And the Gods don’t fuck around.

Previous Story:
Not Such Bad Hombres: Crime is Lower Where Immigration is Higher

Next Story:
Twitchy Disco: The Effects of Serotonin on Motivation