Up Yours? Blame Saint Peter for the Two Fingered Salute

[dropcap style=”font-size:100px; color:#992211;”]C[/dropcap]
aptured English archers in Norman wars would have their index and middle fingers cut off to prevent them drawing a bow.

Which led to the quintessentially English insulting gesture of those two fingers, nails outwards, raised at the recipient of scorn by uncaptured archers.

Two-fingered salutes have a noble history. We didn’t realise the Papal benediction had such physical origins as recent research claims. But then, we thought it was the signal for inverted commas.

An anatomy professor at NYIT College of Osteopathic Medicine and former orthopedic surgeon offers insight into the likely reason for the familiar papal blessing hand gesture used by popes throughout the centuries.

Dr. Bennett Futterman’s scientific analysis, bolstered by studies of art, history, and religious practices, concludes that the so-called “hand of benediction” — a half-open hand, with pinky and ring finger remaining curled or flexed to the palm — was the result of an injury to St. Peter’s (the first pope) ulnar nerve, not the median nerve as most major anatomy texts and review books note.

“There’s always a controversy about this because some sources say one thing and others say another – the students always ask questions about it,” says Futterman. “I think it has to change.”

Recent images of Pope Francis often show him giving a thumbs up or blessing the faithful with a hand that is fully open. But Futterman notes that many past popes – and those depicted in thousand-year-old frescoes and sculptures, assumed the traditional hand of benediction pose.

“Peter, the first pope, had an ulnar nerve injury and everyone copied him,” says Futterman, whose study is published this month in the journal Clinical Anatomy. “Imitation is a great form of flattery. Out of respect for St. Peter, the other popes followed with that same pattern.”

Running from the elbow to the pinky side of the hand, the ulnar nerve powers the muscles that allow the fourth (ring) and fifth (pinky) fingers to stretch away or extend from the palm. Yet, many anatomy texts cite an injury to the median nerve, which stretches from the shoulder area through the tips of four fingers, as the cause of the hand position in the papal benediction gesture. That assumption, says Futterman, rests on speculation that early popes were trying to make a fist but could not do so because a median nerve injury prevented the index (middle) and long (pointer) fingers and thumb from curling toward the palm.

But Futterman says papal blessings were likely intended to be given with an open hand, rather than a fist, and dove deeply into cultural, religious, and art history to support his theory. 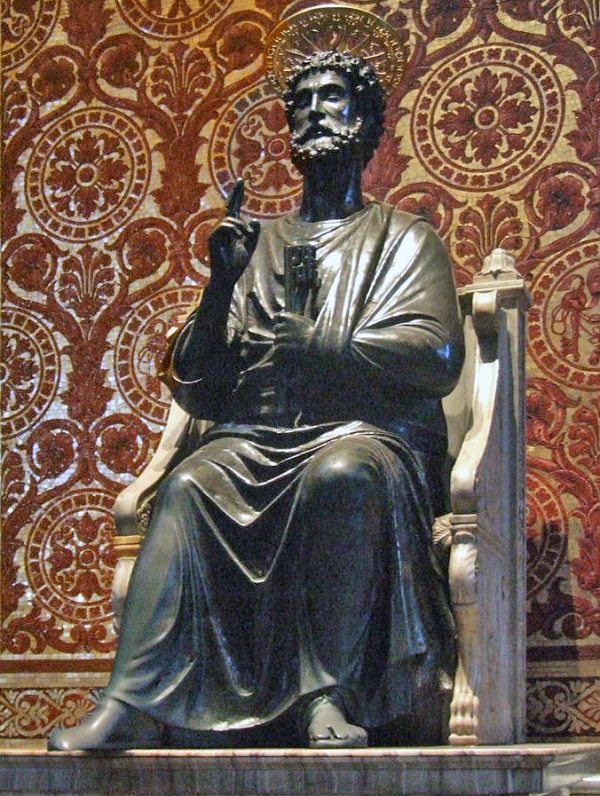 “A fist has always been a symbol of war – it’s never a positive position,” says Futterman. “No holy man would ever bless the faithful, a crowd, or followers, by making a fist.”

“The way that Jewish high priests blessed the people is what most would recognize as the Vulcan or ‘Spock’ gesture,” says Futterman, referring to a V-shaped open hand position. “Later, Peter was trying to do that – he would have blessed people the way he knew. But if you have an ulnar nerve injury, you can’t spread your fingers and you can’t extend your pinky and ring finger.”

Futterman says he became interested in studying the papal benediction position because of the conflicting information in anatomy texts and lectures. A former orthopedic surgeon at Mount Sinai Medical Center, Futterman has most recently worked with NYITCOM students on a new anatomic dissection approach to the brachial plexus, a major network of nerves originating in the spine and passing through the neck and arm.

For his next study, Futterman seeks to learn more about the disease process behind the ulnar injury.

“There’s some evidence beginning to emerge that this may have been a leprosy infection affecting the ulnar nerve,” he says.

Next Story:
Great Band, Shame About the Crowd (The Heartless Bastards)