What happens a German electro-prog band hands out the brown acid. Album Review

[dropcap style=”font-size:100px; color:#992211;”]K[/dropcap]raut-rock had it’s apogee, but we’re still waiting for a contemporary act to capture the wild magic of their pioneering forefathers.

Ecstatic rhythms once stomped out by stoned art students railing against a shellshocked culture set the tone for a society to reinvent itself. Where now those wild visions for modern Germany?

Long Distance Calling are a competent band, but on tracks like ‘The Getaway’ (where we are given a compelling romp through pixelly synth 80s montage music) they excel. Recalling US electro-jam rock band Particle, they coax wide-eyed amphetamine harmonies over an overdriven G-force groove. The adjective ‘driving’ could easily become overused here and with it’s upward endless e-funk roll, there is something delightful and Amiga500 about how the track progresses.

Moroder-ish arpeggiation, Linndrum breakdowns and ‘is this too much?’ headband guitar chords just rock my world. Can you imagine all that while playing Out Run? Let’s do it:

The rest of the album is a far less stellar affair. For starters the mix is a bit too raw. Usually the lack of processing, giving the music a lot of up front aggression, would be praised. However in this setting (nominally prog) it feels missed.

This is a Prog record, but without Prog’s ale and indulgent whimsy, feels thin. In many ways Trips feels like a live recording mixed by a guitarist. It’d be bitchy to say that it feels live to the point where Trips is almost a demo recording. You get a sense of what the melodic figures will be but ‘*Cough* Yeah I’ll embellish that at home *cough*. Watch some Guthrie Govan YouTubes, weep, watch some Bill Frisell, sob, watch Dave Gilmour, feel better, wank and then plot the key changes within a pentatonic frame, before messing it up with some effect-laden chromatic atonality. Job done. Is that finished, by the way?’

As it is we are left with stark, sober and unstoned Teutonic prog. The Kraut is decidedly in the bag. For pity’s sake, we must let out our Kraut.

From the initial promise of ‘Getaway’, all too soon Trips becomes middle of the road with too much emphasis on moist emo fare and introspective ballads. The absolute nadir being ‘Rewind’, where the repeated outro of ‘chained to the world’ signals the point where boredom becomes ennui.  While there are some overtures toward a Peter Gabriel-esque sweep, the result is sounds more akin to something Linkin Park rightly rejected for being too banal.

Case in point, ‘Trauma’ starts well enough with a strong riff, but then without much delay, rot starts to set in as the lack of musical direction (the ideas themselves are sound) becomes apparent. The song becomes desultory and repetitious. Even the quiet section feels obligatory, introducing some pointless musical interludes which mark time until the we return to the now shopworn riff. 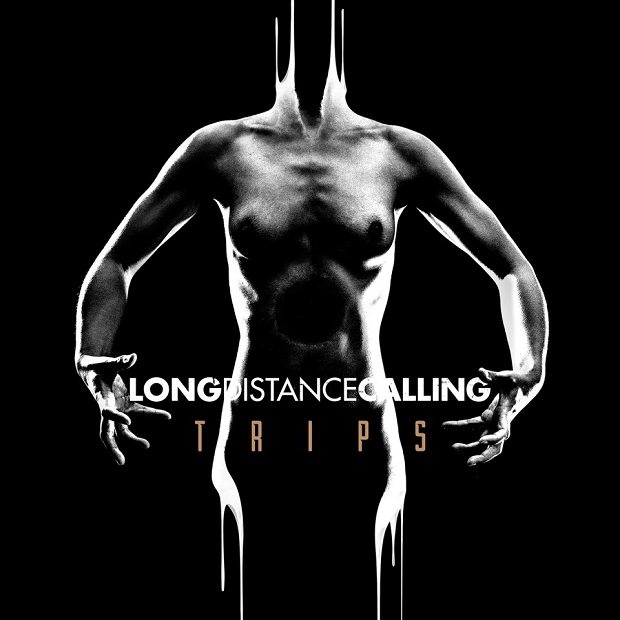 Trips isn’t entirely without hope, the instrumental ‘Momentum’ promises a lot and reaches a nice groove, but never really pushes the boundaries, returning to soon to familiarity to achieve any sense of journey. To use the driving analogy which I’ve tried thus far to suppress, this is like driving a deserted Indy500 in a family sedan: we are initially thrilled at the speed of acceleration and the promise of the setting. We perceive the first turn as dangerous. But all too soon it’s just the same turn. Again and again and again.

Final track ‘Flux’ moves into musical areas that fans of Pink Floyd might remember. However, underpinning Waters/Gilmour’s musical vision was a darker emotional sensibility otherwise known as depth. ‘Flux’ doesn’t reach those human recesses, but at least here we see Long Distance Calling take off musically and achieve something close to flight. That is, until some wretched voiceover tries to make a socio-scientific point while a clock ticks in the background. This itself should give any discerning listener pause. How cynical do you have to be to come up with that one? ‘You know what would go well with that science bit? A ticking clock! *Sniff* You know why it’s fresh in here lads? Because we’re minted’.

Prog rarely does irony well. Its most endearing quality is that it’s earnest. What compels an electrical engineer, two teaching assistants and a middle manager from a Leicester-based carpet warehouse to recreate a Febreeze-based druidic elemental summoning in a Berkshire gymnasium? Prog does. Long Distance Calling and their ticking clock of +10 tedium only serve to summon us back to earth with a brown squelch.

Overall, the album lacks both emotional depth and musical intrigue and, as such, fails to win over the listener. At their weakest Long Distance Calling are a turgid musical unit that sucks dry a few musical clichés until the song’s dessicated corpse is stomped into the mud by the welcome distraction of paint drying. At their best they bring a bag of smiles, roll a big one and don’t hog the couch.

‘Getaway’ shows a deftness of touch and general playfulness, which was why it was rightly released with a video. Why? Because it’s fun.

That fantastic quality of music, akin to enjoyment, but more external and visceral. That universal pleasure which has us hitting scrabbling for a ‘nother hit. I’ve played and replayed ‘Getaway’, I revel in it’s sexy ‘tasched vibe, and you will too.

Next Story:
Born that Way? What Science Actually Knows about Sexual Orientation