The Joy of Sex and Chestwigs (Tragedy)

Tragedy do one thing and they do it well

[dropcap style=”font-size:100px; color:#992211;”]F[/dropcap]
or those unfamiliar with the entity known as Tragedy (The All Metal Tribute To The BeeGees And Beyond) [from here on out, known simply as Tragedy], they have been kicking around, strutting their metal-laden disco moves for a significant time.

Initially a BeeGees based metal covers band the unique bunch spread out, covering songs penned by the BeeGees members and eventually took the plunge into what is simply known as ‘And Beyond’ – Disco and cheesy 70s and 80s (and at a push… 90s) pop in all its forms.

In all, Tragedy are rather catchy, infectious, highly entertaining live act, and rather talented with what they do and how they do it. Being described in terms like “Camp as a row of tents, and with more hooks than hell’s cloakroom” (Metal Hammer) and possibly a closet musical fetish for people who still don’t like to admit they aren’t as ‘Metal’ as they put themselves over, the band do one thing and they do it well.

On to the album. Given its title, you can tell that almost the entire album has a very strong theme revolving around doing the deed. Be it via the artists covered (Prince, Madonna – two very potent examples of sexualisation in their imagery) or the themes of the songs (Rod Stewart, Olivia Newton John), Tragedy take the statement; “Sex Sells” and well, abuse it.

With the original songs as a base template to build off, Tragedy add to them. Doses of classic and hard rock are mixed in equal parts with the 80s brand of heavy metal, along with the band’s own unique delivery and humour. It all establishes Disco Metal as a very viable subgenre of metal. Not convinced?

Take the appearance of the classic Rod Stewart track, “Do Ya Think I’m Sexy?” and give it a spin. The very memorable melodic line played NWOBHM style by the twin guitar assault over some real fist pump-worthy metal gallops with rhythmic thunder… and gratuitous use of double kick to boot! Does exactly what is needed. Instead of the grizzled and rough vocal style of the original, the slightly softer and more melodic approach adds another dash of personality to the track and we cannot overlook the appearance of the gang vocals in the choruses, ramping the fun factor right up. In all, it’s a great effort to make the song their own, but what really does it is the homage to Meat Loaf; the baseball play by play commentary sample from “Paradise By The Dashboard Light” features here, making things even more entertaining, and rounding the song off nicely!

Of course, that is just one track on the album. “Funkytown”, originally performed by Lips. Inc. takes the disco-funk classic and puts it in a blender with a hefty dose 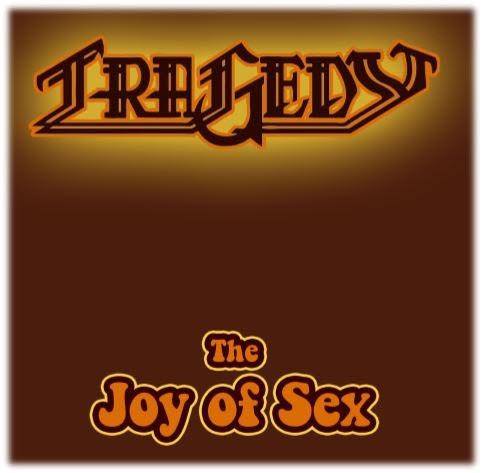 of Twisted Sister and Black Sabbath. The result is a metallic disco-funk groove monster. Iconic Black Sabbath styled riffs, corny overuse of the Talkbox effect and Dee Snider-style power shouting really makes this one something you can move too.

The lead single from the album, “Stayin’ Alive 2017”, is a re-mastering of their original cover from 2008/2009 off their album We Rock Sweet Balls, Can Do No Wrong, complete with a highly entertaining video. For those who discovered the joy of Tragedy back in the first decade of this millennium, it basically sharpens up the original version and adds a hell of a lot more metal to it.

I could touch on the other tracks here, like the power metal friendly “Never Gonna Give You Up” (Rick Astley) or the joy of hearing the iconic sax line of Gerry Rafferty’s “Baker Street” delivered with an Iron Maiden-like delivery, or the highly amusing “Physical” by Olivia Newton John (which takes an already terrible song… and makes it just as terrible but far more enjoyable), but I will admit, the music Tragedy breathe new life into is an area my personal tastes rarely encroach upon.

That said, being already familiar with the band, having seen them live several times and owning some of their releases and merchandise, I had to talk about this album because it represents something in music which is all too often overlooked these days – entertainment and fun.

The tribute/parody path of music is something most people shy away from, but if you find a gem in it (which isn’t Weird Al!), it’s something to keep track of. The fun factor too, often highlighted by Electric Six, The Bloodhound Gang, Tenacious D etc., also gets overlooked a lot. Finding a band which both parodies music and makes it entertaining and enjoyable to experience should be something to keep a tight hold on. Tragedy do just that.

Catsuits, Chest Hair, Medallions, Pink Flying V Ukuleles and incredible interactions with the crowd are just some of the things Tragedy can bring, so instead of just experiencing the audio side with The Joys Of Sex, why not experience it all? Get the flares out, backcomb the hair and spray it up. Get your corpse paint on too, and bring Disco Metal to the masses!

Next Story:
Itchyness and Pain: You Know the Difference, But Does Your Body?