The Tr(i)ump(h) of Identity Politics

Something about Donald Trump appeals to a large number of American voters. What is it? Douglas Bulloch offers some answers.

Lightly, but ostentatiously conversing with the crowd amid the din of boxing ring fanfare. Arriving at the lectern, under the inevitable WWII aircraft, he surveys the adoring hordes like a captain gazing out to sea. When eventually he speaks his voice is quiet, grateful, conspiratorial, flattery falling easily from his mouth, taking agreement for granted. His words are both collective and self-referential, making great play of big audiences. Us in here, them out there.

The whole atmosphere is one of ‘who do they think they are?’ They being ‘those people’ … “who does that?” … “who says that?” … “what are they thinking?” “Trillions…billions….They’re killing us…China…” “Every guy that attacks me, they’ve all gone down. We gotta keep it that way.” “I don’t get it. [neither do we] haha, he says ‘neither do we.’ 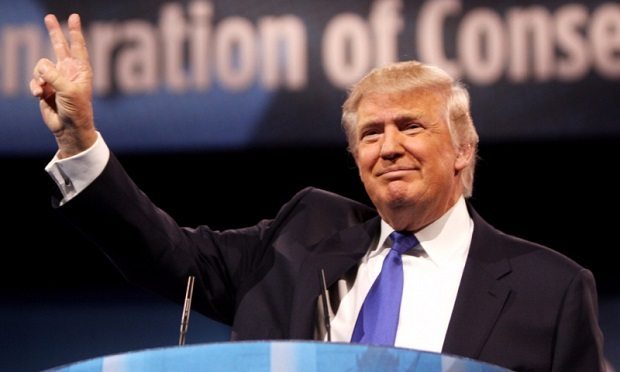 He’s literally at zero… and all he can do is attack me” “We have wounded warriors — who I love by the way — everywhere…” On and on and on.

“Strong” “Vigilant” “Build a wall” “We’re going to do it” “It’s not going to happen.” A protester speaks, the crowd erupts. “Treat her nicely” “Don’t be mean” “I could probably convince her we’re all in this together” “Security here is like our country” then, a flash of anger: “Get her out!”. He tumbles on, “Did you see that guy in Paris, the one with the dirty hat? The ‘Mastermind’ [media newsreader voice] the ‘Mastermind’ … in the dirty filthy hat.”

He holds pieces of folded paper, but refers to them sparingly, preferring to shoot from the lip. His arms work a kind of magic on the crowd. The point. The sweep. The ‘Jersey shrug’, before the shoulders bull up, hands cornering the lectern. Voice raising to a pitch. “The media want us to surrender. But I want ISIS to surrender.” Prolonged applause. “Dirty, rotten, no-good traitor” “Third rate reporter — remember that — third rate reporter.” “We can be weak, we can be stupid, or we can win.”

This is it folks. This is politics. Years of sophisticated arguments, carefully constructed discursive limits, code words, labyrinthine policy positions, the West Wing. All facing a deluge. Swept away by a raging minotaur with an orange face. A face, however, that can do funny, sincere, serious, furious, and rock-star charm, while hardly moving at all. A face that no one can penetrate. A face that can take a punch and look better.

The face, now, ladies and gentlemen, of America.

[Part one of a long essay on Donald Trump, written in December 2015]