The Many-Faceted Beauty of the Flying Street Rat Yeah, maybe they're cute, fluffy and of great scientific interest. Bet you wouldn't eat one though….

Your standard street pigeon might seem like a bore, but pigeon fanciers well know that the species as a whole is quite the opposite. Pigeons come in all colors, shapes, and sizes. Some have feathers reaching up over their heads like a hood. Others have feathers all the way to the tips of their toes or fanned out on their tails like tiny turkeys. Still others have beaks almost too small to see. Now, researchers reporting online on January 19 in Current Biology, a Cell Press publication, have traced the birds' family tree in an effort to sort out how all that remarkable variation came to be 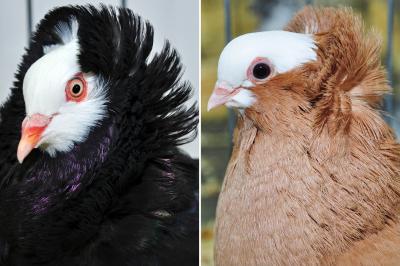 "Most people think of pigeons as rats of the sky, but domestic pigeon breeds are wonderfully diverse," said Michael Shapiro of the University of Utah. "There are over 350 breeds that differ in color and color pattern, body size, beak size and shape, skeletal structure, posture, feather placement, and behavior. Our goal is to track down the DNA-level changes that control some of these interesting differences among breeds."

Shapiro's team also found that feral pigeon populations—one in Salt Lake City and another in Scotland—have mixed with racing breeds, such that they are now genetically very similar to those used in competitions around the world.

All those pigeon breeds wouldn't exist but for the hard work and careful breeding of pigeon fanciers around the world over thousands of years, Shapiro says. Modern breeds are frequently described as having origins in England, Germany, Belgium, or elsewhere in Europe, but their progenitors were probably brought there from afar by traders or colonialists, the researchers write. Indeed, the new work traces the geographic origin of some breed groups to India and the Middle East.

As for the future, the researchers say that studies of pigeons might also help to explain variation among wild birds and perhaps other animals as well.

"The striking differences we see between breeds within this single species are characteristic of the types of differences we typically see between species," Shapiro said. "Our hope is that by understanding the genes that control pigeon diversity, we'll have a great starting point to understand diversity in the wild."