[dropcap style=”font-size:100px; color:#992211;”]F[/dropcap]lamboyant hats, embroidered waistcoats and a raft of semi-acoustic guitars that urge you to squeeze a gentle finger into their f-holes, The Jar Family are gritty angels bringing industrial folk, dropped aitches and northern strut to the UK’s finest stickyfloor emporia of sound.

From Hartlepool, via Cambridge and Cornwall, the have band toured the UK with Alabama 3, lend Hartlepool United their battle-chant (their debut single ‘Poolie Strut’), and somehow manage to contain the wild mood swings of five singer/songwriters and a slew of additional bandmembers into one raucous mob.

Who are you?
Keith Wilkinson from The Jar Family

Why folk?
We call it ‘industrial folk’ because sometimes we can be as loud and trashy as The Clash in a bathroom. Then again, we can be as sweet as Larry Love in a bath full of Southern Comfort, but it’s only really folk inasmuch as The Jar Family is music for the common man by the common man – and we are quite common.

In truth, we are to folk what Van Morrison‘s Astral Weeks is to jazz. 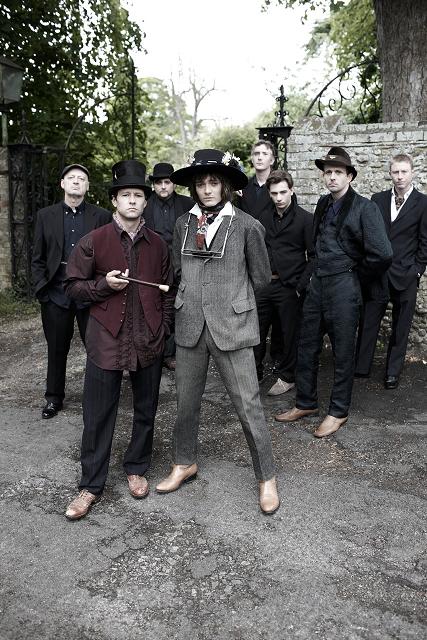 What attracts you to acoustic instruments?
We’re attracted to absolutely any instrument – the acoustic thing is just a natural heritage from humble beginings.

How does the Jar Family story go?
Once upon a time in a land far, far away …. Hartlepool, unemployment, songs, Cambridge, more songs, Cornwall, recording, more songs, rehearsals, van, road, and a cunning plan.

Have you ever thought about making your own instruments?
Dali has a three stringed slide guitar that he found in a skip and subsequently ‘Frankensteined’ – it sounds great!

If someone was unfamiliar with the concept of a band, giving you a clean slate to describe what The Jar Family was, what would you say?
Five singer/songwriters guided by a born-again Jedi. We’re not restricted by writing styles and the lead vocal constantly rotates, so our aural landscape is ever-changing too – a bit like Cumbria.

How many people are the Jar Family and why this number? Do you think the music would lend itself equally to more or less bands members?
We have a core of six but the band wouldn’t exist without the large extended family who spill blood (sometimes quite literally) to make it all happen. On stage or on record the beauty of Jar is it can work as a solo performance or a mob-handed affair – it’s whatever the songs require.

What are your ambitions for the band?
Catering and Wardrobe.

Have these changed over time?
Which … the ambitions or Catering and Wardrobe?

What would be the most ideal gig for the band and what would your audience look like?
In the U.S. there are a lot of purpose-built, outdoor ampitheatre style venues that are part covered and hold about 6 to 8,000. Whilst all musicians aim for the heady heights of stadium rock the aforementioned venues on a balmy summer evening can be quite intimate and just perfect

Do you think the romance of being in a band has died? 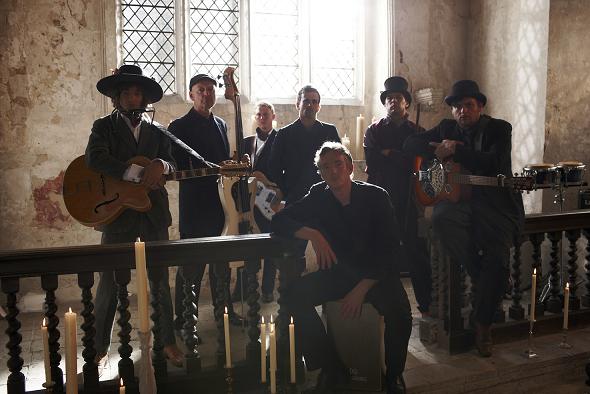 No. Romance only dies when lovers tire of each other.

Can you still be honest in music?
Yes, but it’s also sometimes necessary to tailor one’s work to the cut of the media’s cloth.

What obscure bands do you admire and why should people listen to them?
There’s a guy called Bob Dylan – he’s different. Half Man Half Biscuit – obscure and admirable.

There is a strong sense of bittersweet humour to your music. Do you like a having those two sides of the coin represented in the material?
I must admit to being a bit stumped by this question. Yes, there’s a lot of humour in the band but the songs are just stories told through the medium of a modern song format. There are elements of bitter and sweet in there – but that’s just life.

Would you say that you have one message as a band or are there various voices at work here?
One message ‘Keep it real’.

Although I suspect one or two of the band hear voices.

What now? What then, and what for the future?
What then? – was album one The Jar Family Album, and gigs.
What now? – is album two Jarmalade, and gigs.
And for the future? – that difficult third album and sushi in San Francisco and Tokyo.

Next Story:
The Sea and Cake : Live, The Scala