The Feminine in the Feminist: Women take their Life-Making skills into Contemporary Art

[dropcap style=”font-size:100px;color:#992211;]A[/dropcap]t art schools in the sixties and seventies, American modernism held sway, even if French existentialism formed the intellectual climate within which modernism was pursued.

And so, briefly, angst-ridden expressionists – old white men – poured out their grief and raged, raged, against the dying of the light. In the Cedar Tavern in New York, painters of large-scale abstract paintings, would drink, smoke and fight. At the same time, European Christians would wonder why God had forsaken them.

If women were to be taken seriously, they had to drink, smoke and fight too. They had to join in.

It didn’t last, thank heaven. Following the years after the second world war, the victorious allies tried to fathom what their new freedoms meant.

In Paris, Les Temps modern, directed by Jean-Paul Sartre and his partner Simone de Beauvoir, published the pair’s thoughts on the ‘philosophy of existence,’ as they called it – Existentialism to the rest of the world.

Concerned with freedom and equality, Sartre and Beauvoir were pro-abortionist, often paying for their students or their students’ partners to have illegal abortions. And so, even before the development of the contraceptive pill, there were pressures from the Parisian intellectuals to recognise equality between the sexes; and between homosexuals and heterosexuals.

When the pill was developed and became legal, sexual freedom emancipated women and gave them control over their fertility. In the USA there was an increase in college education for women and the number of women graduates. It became easier for women to have careers.

Beauvoir wrote an article for the Les Temps moderne entitled, ‘Women and Myths,’ which later became the two-volume work, The Second Sex.

This was to have a profound influence over second wave feminism in the USA and abroad. Women no longer had to join in. They could make their own careers as artists and devote their work to their own ends.

The pill was approved by the FDA [Food and Drug Administration (USA)] in the early 1960s; its use spread rapidly in the late part of that decade, generating an enormous social impact. Time magazine placed the pill on its cover in April, 1967 (…) Claudia Goldin, among others, argue that this new contraceptive technology was a key player in forming women’s modern economic role, in that it prolonged the age at which women first married allowing them to invest in education and other forms of human capital as well as generally become more career-oriented. Soon after the birth control pill was legalized, there was a sharp increase in college attendance and graduation rates for women. From an economic point of view, the birth control pill reduced the cost of staying in school. The ability to control fertility without sacrificing sexual relationships allowed women to make long term educational and career plans. (Wikipedia: The Contraceptive Pill)

Sexual freedom and the new permissive morality was soon transformed by the politicized feminist movement. The hard men of abstract expressionism looked outmoded and even brutish. The Beats were beat.

Looking at the matter through such an historical filter permits us to see the skills and traditions of feminine endeavour in a new light. Women, especially in the United States, have taken up quilt-making as a mark of feminist life-affirmation. There is a re-evaluation in this ‘maternal’ form of life-making that has traditionally involved women, and that women now celebrate as their own. 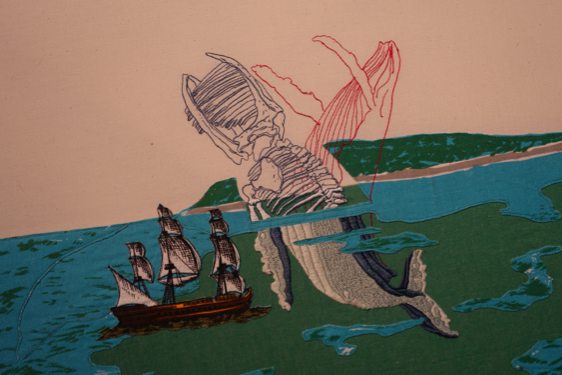 Feminism has embraced the feminine. So it is that forms of feminine life-making have come to the fore as ways of art-making in which men too can join in. It is notable that contemporary artists like the Ukrainian/French couple, Camille et Nikita Kravtsov, whose work is currently on show at the Halle Saint Pierre, Montmartre, Paris, work collaboratively on these pieces in a gender-neutral space. These are beautifully drawn and then painstakingly embroidered images.

The exhibition entitled, ‘Tooth and Root,’ describing the work as, ‘Moving Embroideries,’ is full of invention, charm, and a gentle reminder of Surrealist humour. ‘Cat Bugler,’ [I presume this is a misspelling of Cat Burglar] has a flying saucer send a ray of light into a first-floor bedroom window. 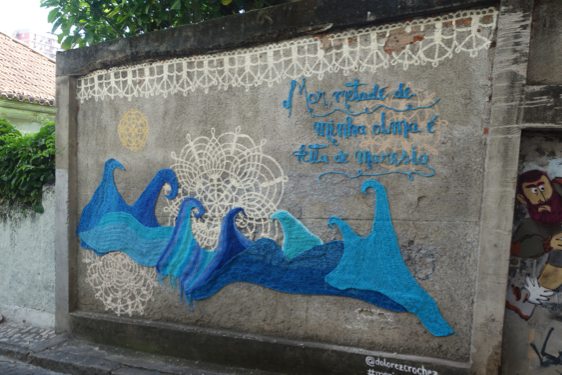 A photograph taken in January 2016, in the streets of Rio de Janeiro, is a crocheted piece commissioned by the local government as part of its ‘street art’ initiative. That piece is made by a woman artist whose tag is @dolorezcrochez

The work of the Kravtsovs and that of @dolorez are a world apart from the mainstream modernists with whom we started this article. It is much to be commended.